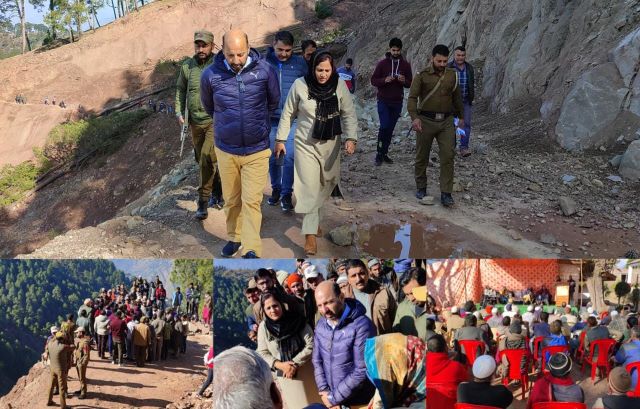 After a random inspection and discussion of the current situation with the DDC chairman, city council and other representatives of the public, the DC assured that the district administration would take all measures for a speedy rehabilitation and ensure the necessary supply of the cut-off areas by reloading. The DC also instructed the ARTO to make transhipment arrangements to support the people of the region.

The Deputy Commissioner instructed the Chief Engineer PMGSY to start work on the damaged track immediately to restore the connection for light motor vehicles to the Gandhari Block. He said a team of experts from IIT Roorkee would soon survey the site to prepare a plan for its permanent restoration.

The DC informed that the village of Bathni is to be developed into a tourist village which will boost economic activities in the area. He also advised farmers to take up gardening and other related activities to get the most benefit from the government-sponsored programs.

Later, the DDC chairman and deputy commissioner also interacted with the people at Gandhari and listened to their problems. The executive engineer assured the public that the PMGSY department will take over the Kanga Gandhri road for its expansion.

Meanwhile, the Chairman called on the government to re-sanction the 17km Kanga-Bathni road via Gandri under PMGSY for its expansion. The Chair assured people that she would raise the matter with higher authorities to fulfill the aspirations of the people of Block Gandri on the development front.

The Chair informed that all issues of public interest affecting the Gandhari bloc have already been prioritized by her during the Union Ministers’ Outreach Programs and the Back to Village Phase 4 Programme.