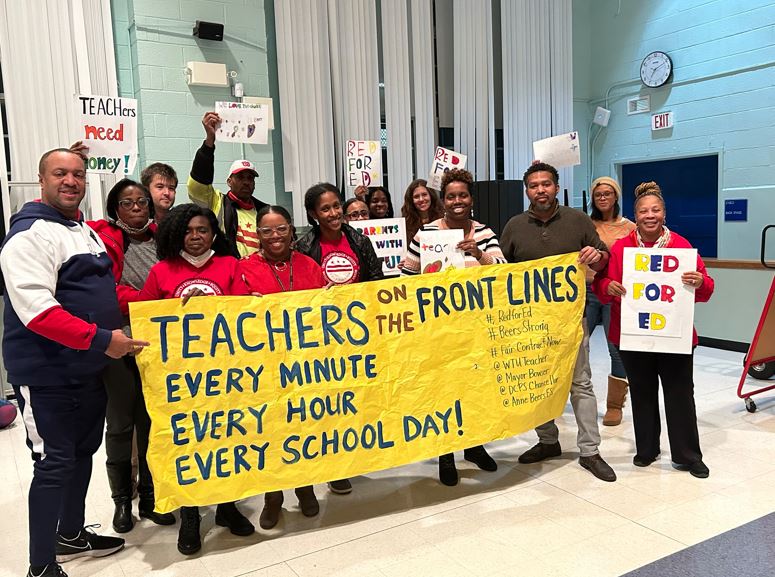 Thursday’s day of action, organized by the Washington Teachers Union, called on teachers to evacuate schools across the city to end the impasse with DC public schools that has left teachers without a raise or contract since October 2019 worked. Teachers were seen protesting at locations across the city including Alice Deal Middle School, Kramer Middle School, Wheatley-Wales, Tubman Elementary and Whittier Elementary.

The Washington Teachers Union is keen to give the 5,000 educators it represents a voice as the non-contracted teachers enter their fourth year.

“Tell Mayor Bowser it’s time to end the arbitration and settle the Washington teachers’ contract,” the Washington Teachers Union demanded as teachers prepared for the upcoming Thanksgiving holiday for themselves and their students, without a word about a new contract.

DC Teachers Union President Jacqueline Pogue Lyons said teachers have been working for too long without a contract or raise.

“Our teachers have not had a contract since 2019. The number one thing this city can do to improve teacher retention is the Washington Teachers Union Contract. Lyon said in testimony before DC City Council ahead of DC Public Schools Teachers’ action on Thursday.

Contract negotiations moved to arbitration last month after both sides blamed each other for the lack of progress towards an agreement.

Louis Ferebee, chancellor of DC Public Schools, said he was surprised teachers were planning a protest, suggesting the two sides were getting closer to an agreement.

“I am surprised to see this planned protest as we and WTU had already planned to resume contract negotiations this Thursday,” Ferebee tweeted yesterday.

But parents and supporters of DC PS teachers fired back at Ferebee via Twitter.

“The way you and @Mayor Bowser are treating our DCPS educators is embarrassing,” T Eastunder tweeted. “You can’t really be surprised to see this action. As a parent of 2 DCPS kids I support our teachers – pay them now, pay them more and give them what they ask for,” Eastunder tweeted.

At press time, arbitration proceedings, which began Thursday, have not resulted in a successful deal, although both sides have said they are still working towards an agreement.

“While collective bargaining agreements are confidential under the DC Code, we are proud of our offer, which includes robust pay increases for educators,” DCPS officials said in a statement released Thursday afternoon.

Pogue Lyons then issued a statement of his own, saying there was still a lot of work ahead of them before the two sides could reach an agreement.

“We’ve sat at the negotiating table for 12 hours today, but we still have work to do to achieve what’s fair for teachers and good for students,” Pogue Lyons said.

Help us spread OUR story and join the AFRO family as a member – subscribers are now members! Connect here!