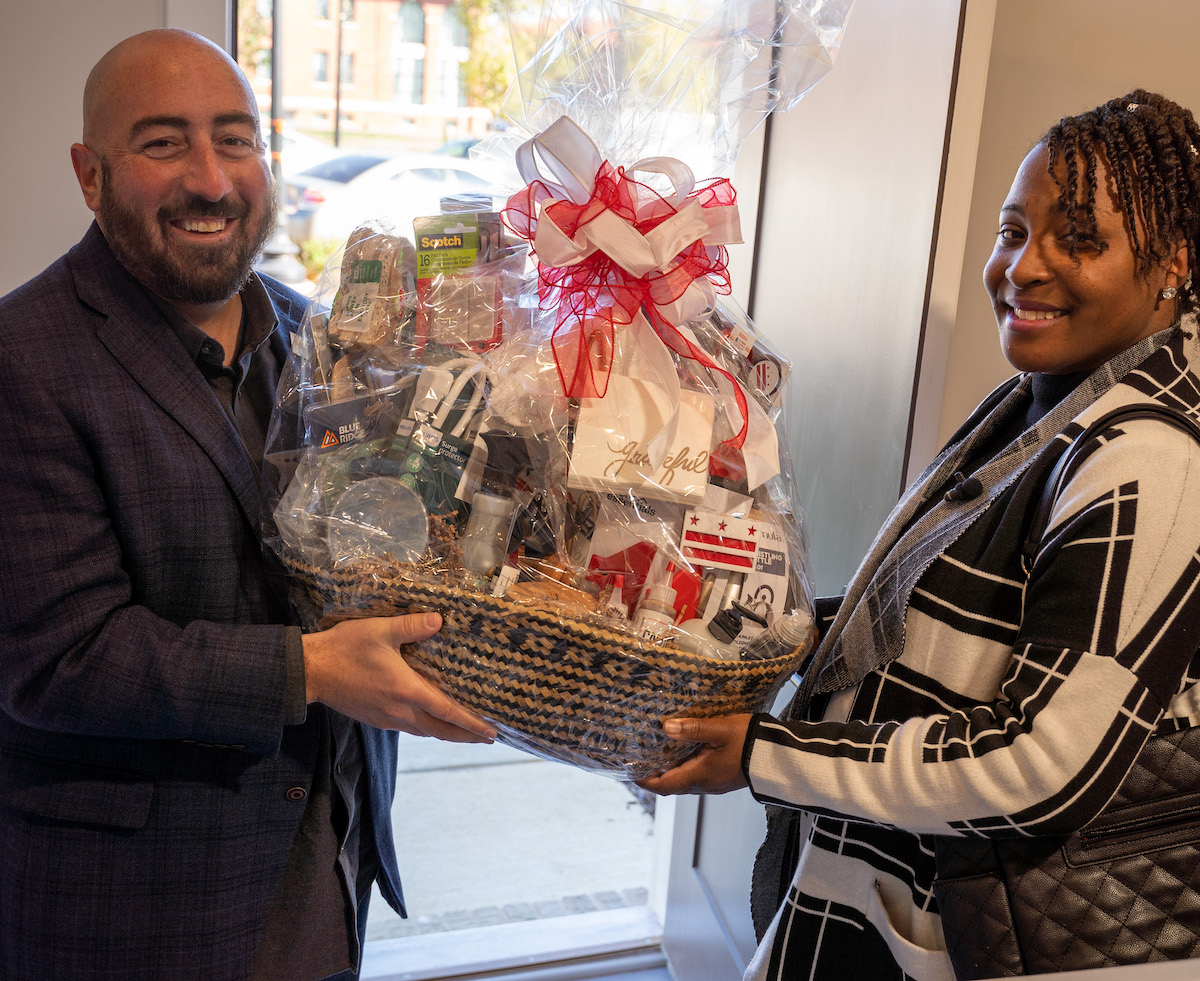 DC native Brittany Freeman closed up her own home in the District just in time for the holidays. To celebrate the milestone, she received a gift basket from Mayor Muriel Bowser to commemorate her journey as part of Bowser’s Black Homeownership Strike Force (BHSF), which is committed to creating 20,000 new Black homeowners by 2030.

She describes how she felt “excited” on her journey from being an interested prospective homebuyer to a closing date. Freeman’s achievement is one that she believes other residents can achieve as well. However, she admits that the decision to find a home and go through a process of signing a 30-year mortgage is not without concern. “It’s the financial trauma that most black people in the community have,” she explained, “and the understanding that poverty isn’t just a long-term thing. You can eventually grow out of poverty by pursuing education. And I had to understand that an education would be my legacy and my home.”

Freeman relaxed with well-wishers at her front door and shared that even some of her closest friends warned her not to “dream too big.”

Deputy Mayor John Falcicchio joined the conversation, pointing out that owning a home is far less risky than paying a permanent rent. He added that homeownership “makes your finances better known! Other people have said they don’t want to turn themselves in [their financial situation], but you actually know you’re going to pay for the next 30 years. How many people can tell you what their rent will be for that long?” he said.

While Freeman has been able to take advantage of programs including a DC employee purchase assistance program and the home purchase assistance program, Falcicchio listed several additional programs the mayor will be pushing in the 2023 budget. One program is a $10 million black homeowner fund that will help buyers with some expenses related to down payments, closing costs, and the like. Another new program is a $1 million Heirs Legal Services Fund to educate people about estate planning.

While these programs can certainly support low-income residents and help direct people into affordable housing, the goal does not require the 20,000 new black homeowners to meet any income requirements.

Local agent Tawnya Brown of Mcwilliams/Ballard, Inc. also attended the closing ceremony. She explained that prospects can be good for working-class people, but she admits that buying an affordable home in the district requires some know-how. She said: “It has always been my goal to help teachers, firefighters and police officers live where they work. But not everyone can have a place because the prices are getting so high.” She laments that time is working against a number of buyers. “It’s getting to the point where you can’t afford to stay in town unless you buy now,” she warned.

The mission of Bowser’s Strike Force, according to Falcicchio, operates almost parallel to other already established homeowner district programs. One in particular has repaired about 100 homes to ensure they comply with the code. “There are other programs that we have that support older residents who own their home and need to make repairs. And it focuses on specific points that need to be addressed. Many people need to have their roofs replaced. So for now we’ve focused on the repairs we know we can do, and at scale.”

The Black Homeownership Strike Force met to deliver the mayor’s recommendations for meeting the 2030 goal, bringing together experts from government, housing and financial advisory, lending/underwriting and real estate development. Additionally, representatives and advocates from religious, senior, immigrant and LGBTQ+ communities focused on addressing social and racial inequalities were part of the process that led to the 30-page report on increasing the number of black homeowners in the district led .

The strike force was staffed by the Deputy Mayor’s Office of Planning and Economic Development and supported by researchers and analysts from the Urban Institute and Howard University. Part of the BHSF’s work involved interviewing residents who were able to take advantage of district homeownership programs to purchase their first home. The panel also took advice from local residents who were trying to buy a home and had not yet achieved that goal.

As for Brittany Freeman and her twins, she says she’s especially fortunate that her children are in a better position in their lives than they were when they were young. “One less worry is my kids going to college and not having to experience what I did when I went to college and not having a home to go to,” Freeman said. Bursting with pride, she told everyone who could hear, “You can bring your college friends over to your house. And I think that was the last one and I didn’t have to worry and I completed that journey.”