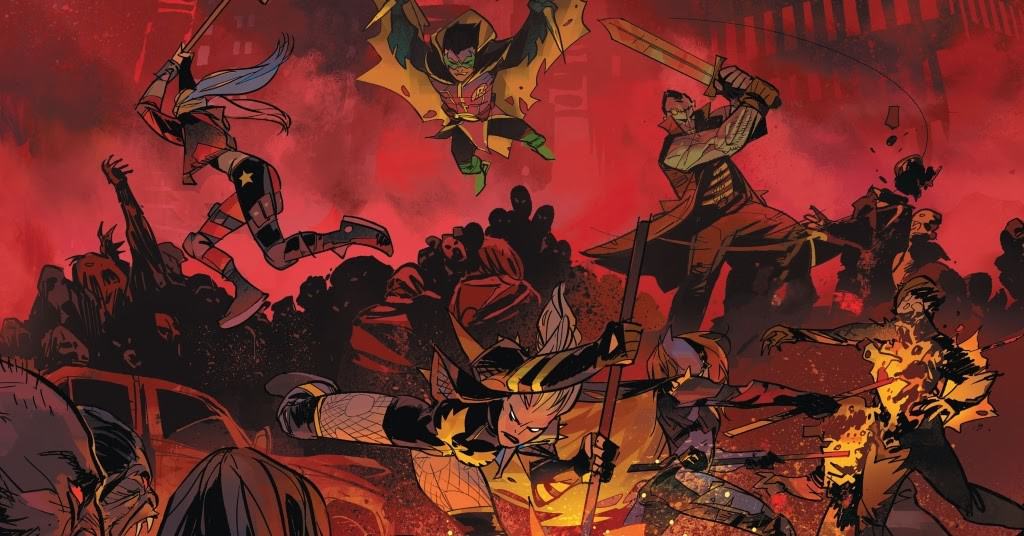 The thrill of an Elseworlds title is the unbridled creativity that can emerge thanks to the disconnect from continuity. Writers don’t have to stick to the status quo in the Batoffices, artists and colorists can choose costumes and aesthetics that are consistent with the story rather than what’s established. It’s a blank slate that can spawn new and innovative elements that exceed all fan expectations, while still playing off those same expectations and making them something original. A book like DC vs Vampires is a title that makes the case for these kinds of stories from the Big 2, playing firmly with the DC Universe to tell a story unlike anything else on the shelves.

It’s a rock-solid, simple storyline that kicks into high gear and never takes your foot off the gas. Tynion and Rosenberg play out the dynamic set in previous editions, paying off the construction of the world and its players at a rate that makes this edition a breeze. The three storylines are unique and offer different aspects of the DC Universe’s action sequences, from the hyperkinetic, vicious battles of the Bats of Gotham to the brief but brutal Supergirl/Steel conflict with a vampiric Martian Manhunter with a Lobo-appearance treat fast carnage. That Green Arrow Plot gets the least side of real estate but features a tense arming scene as Swamp Thing prepares for an all-out assault on the facility.

Beyond the action, Tynion and Rosenberg’s script continues to capture the pure ethos of the DC Universe, drawing from continuity to deliver fun cameos and larger world implications. This edition makes it clear that this book is more than just fun mush as it explores the vampire’s reaction to Earth’s expanding cosmic population after he decides to send all aliens who cannot be rejected back to their homeland in order to to evade galactic politics. It’s a small moment that allows for the issue’s cliffhanger, but in the larger context of the series, it shows the effort that went into crafting the mechanics of a vampire-ruled world. It also allows the duo to use even more characters like Martian Manhunter and Lobo, and shows that the writers can capture their voices just as well as the ragtag superheroes and urban vigilantes.

Schmidt’s art is once again this comic’s biggest draw, highlighting everything related to the script to give this Elseworld a core dynamic and character. Action is the focus of the issue, with Schmidt delivering some career-defining artistry in the Gotham-set sequences, first with ground fighting as the team battles hordes of vampires. Even in the tense situation, humor finds its way as Damian battles a vampiric Spice King. Schmidt portrays the joke as seriously as Black Canary or Constantine appear on the page. The fight between Damian and the villain only lasts two pages, but it serves an important function in establishing how the vampires view Robin and confirming that Damian is still the character that readers are familiar with.

Schmidt sandwiches Batgirl and Black Canary’s furious battle between humorous moves from Damian, battling the Condiment King and then spearing a vamp through Frankenstein, ensuring the action is more than hollow spectacle. It’s beautiful to look at, sure, but it also reminds us that these characters are more than hollow avatars staging carnage. After the harrowing battle, the creative team ups the ante by throwing the team at roaring motorbikes equipped with UV batsignals.

The chase/battle sequence is stunning and gives the Black Canary and Napolitano lettering a chance to shine. The lettering for the SFX is paired with a striking canary yellow that not only brightens up the page but is rendered in a font that plays on Dinah’s fatigue. It’s scratchy and ragged, which suits Schmidt’s line style and adds to the emotion of the page. It also combines with the sound wave effect to create a cohesive cause and effect between the two panels, compelling the eye to focus on the subject. The panelwork in the sequence is tight and concise to ensure characters are never lost when Canary lets out an overwhelming canary cry. Schmidt chooses to focus most of the panel on Dinah herself, then shows the by-products of the move in a smaller panel to show the artist’s strong grasp of what the action works.

Schmidt knows that the plot should be an expression of the story, to convey what cannot be put into words, and Black Canary’s sonic scream is the perfect manifestation of that. The linework conveys a tired hero, still ready to fight, draining the tank to buy a few seconds for a sunrise she might not see, at least as a human. When Dinah returns to the sidecar after that shriek, there’s a resignation that she must try to use her ability again, but the tension is clearly written on her face. It’s a brilliant detail that simply sells what a powerhouse Schmidt is for action as an expression of character.

Schmidt’s colors, with the support of Mortarino and Casolino, improve the clarity of the action, especially when chasing motorcycles. The sharp contrast of the scream’s Canarian yellow against the crimson backdrop of the world makes the action pop and continues in the vigilante’s various costumes. The same contrast occurs in the clash of green with Swamp Thing and Green Arrow, drawing attention and ensuring that the hard backgrounds are always there but never swallow the panel’s objects. The use of color also helps to build up and establish the plate work, as Schmidt generally avoids fixed plate shapes and lines, preferring colored, faded lines with no gutters. The choice of layouts coupled with the palette of reds, blacks and yellows for the panel outlines provide a fluid feel that feeds into the series’ uninterrupted dynamic.