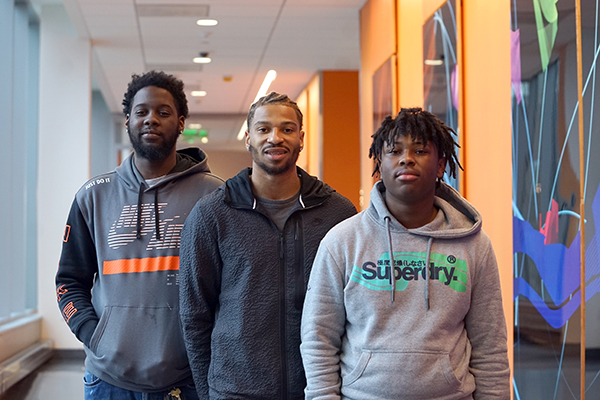 After graduating from high school in Washington, DC, a year early at the age of 16, native De’Andre Gore received a coveted University Partnership Scholarship from the District of Columbia College Access Program (DC-CAP) — giving him a full ride with one of 14 guaranteed universities.
While friends told Gore to pursue a business degree at one of the program’s historically black colleges and universities (HBCUs), such as Marshall or Delaware State, he was loyal to UMass Lowell’s DC-CAP Scholars Program.
And with good reason: two of his half-brothers, Tyson Minor and Ayinde Hikim, were already enrolled at the Manning School of Business.

“I look up to both of them, so I knew my support system here would be top-notch,” says Gore, a freshman business administration major with a focus on finance.

In 2019, UML was the first school to partner with DC-CAP on the scholarship. The partnership stems from a friendship between former Lowell Senator Steven Panagiotakos, a key university supporter, and DC-CAP Chairman Ted Leonsis, a Lowell native who owns the NHL’s Washington Capitals and the NBA’s Washington Wizards. The Leonsis Foundation supports the scholarship financially.

A first-generation college student majoring in finance, Minor introduced his extended family to UML when he was selected from more than 100 applicants to be one of the university’s first 20 DC-CAP Scholars of 2019.

“I came here to visit, and when I found out a few days later that I had received the scholarship, I freaked out,” says Minor, who will graduate with the first DC-CAP cohort in the spring.

Minor was excited to start college in an unknown location.

“When I came here, I met a lot of people with open arms who made my first year easier,” he says.

As a DC-CAP Scholar, he was also enrolled in River Hawk Scholars Academy, a supportive community for first-year and first-generation students. He soon got a working student job at Student Affairs and learned Excel while working for Director of Financial Administration June McDermott. He also found a mentor in former Vice Chancellor for Academic Affairs Larry Siegel, who is retiring in 2021.

“I love Larry. He’s a really good guy. I didn’t know what direction I wanted to take with my business degree, but Larry put me together and helped me figure out what I wanted to do,” says Minor, who discovered his interest in human resources – an area he wants to pursue further after graduation.

Hikim, meanwhile, began college at La Salle University in Philadelphia, where he received a scholarship to play point guard for the Division I men’s basketball team. In the middle of his sophomore year, he decided to make the switch. Knowing that Minor was at UML – where he also knew a member of the men’s basketball coaching staff – Hikim decided to become River Hawk.

“I heard good things from my brother and I knew I would be comfortable here,” said Hikim, who averaged 11 points and 2.7 assists per game in his debut season at UML and is off to a strong start this year. He still has one more year of eligibility in 2023-24 due to the COVID-19 pandemic.

Hikim is focused on entrepreneurship, which makes sense considering he started a clothing store called “Kxlturo” with some friends three years ago. Described as “an urban brand that promotes unity between cultures,” they sell hoodies, t-shirts, and shorts through the Kxlturo Instagram page. Hikim says he was inspired by his mother, Amira, who owns her own vintage clothing store.

“Seeing her do it and being able to set her own schedule made me want to be my own boss,” says Hikim, who envisions working with Minor and Gore one day. “I definitely want to have a family business together – to create a legacy.”

Gore is definitely in, even though he still has more than three years of college to go.

“Let’s take it to the streets. Let’s get it started,” he says as he meets up with his brothers in the lobby of the Pulichino Tong Business Center on a late weekday afternoon. Gore, who describes himself as “casual” in many ways, admits that when I entered college, “I was just thinking about getting this job and moving on to my future. I didn’t even think about what I had planned – what we have planned.”

Luckily he has plenty of guidance from his brothers for at least another year or two. Although the brothers don’t live together on campus, they enjoy meeting up whenever their schedules allow. Gore and Minor also cheer on Hikim at his basketball games.

As an older brother, Minor doesn’t hesitate to give Gore advice whenever he can.

“When you go to college, and I tell him this a lot, you learn to understand what it really means to be on your own,” says Minor, who is working for Student Activities and Leadership this year. “No one will make a baby or take care of you. If you enjoy ordering Uber Eats or DoorDash over the phone, understand that it’s a huge financial drain. If you drive like me, it’s not cheap at all. Understand what you are getting yourself into.”
Gore and Minor say their mother, Chiffon Kelly, was understandably excited to find out they had both received DC-CAP grants. She was interviewed by a local TV station, DC News Now, before they embarked on UML together this fall.

“I mean, two full tuition kids going to the same college — and one of them graduated in 11th grade — I’m just proud and still shocked,” Kelly said. “And I just thank God for the opportunities.”