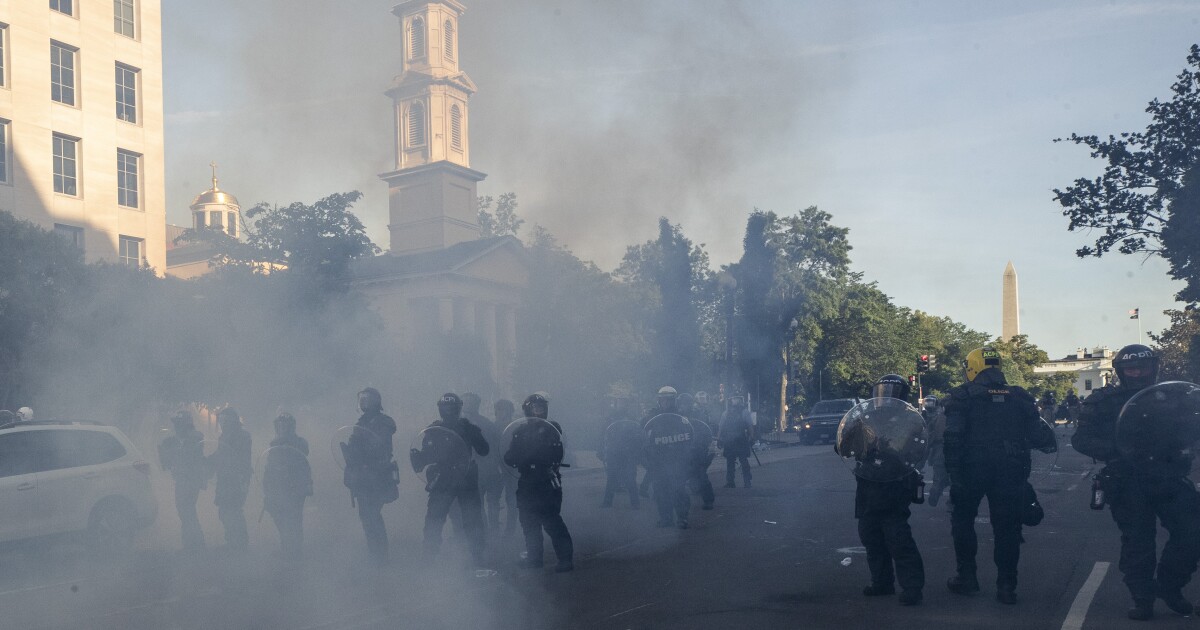 The American Civil Liberties Union and several civil rights organizations on Wednesday asked a federal appeals court to deny full immunity for federal officials and former Attorney General William Barr on behalf of protesters who claim to have been tear gassed in front of the White House in summer 2020.

Protesters claimed officers used tear gas, pepper spray cans, rubber bullets and flash bombs to clear a crowd who were there to protest racial injustice in Lafayette Square Park in June 2020 after national outrage over the killing of George Floyd by a Minneapolis officer who was later sentenced to 21 years in prison for violating the civil rights of Floyd, a black man.

The lawsuit, which has been joined by the District of Columbia, the Washington Lawyers’ Committee for Civil Rights and several other groups, says the lower courts protected law enforcement and former President Donald Trump’s chief of justice from lawsuits alleging violations of the constitution “because of security concerns the President is always involved in any activity by federal law enforcement in Lafayette Square Park across from the White House.”

BREAKING: We have asked federal court to deny full immunity to the former attorney general and federal officers responsible for the 2020 Lafayette Square attack on racial justice protesters. pic.twitter.com/KZ34gAALAP

In their appeal brief filed with the US Court of Appeals for the DC Circuit, plaintiffs argued that “the circuit court’s blanket denial of constitutional enforceability is in sharp contradiction to our constitutional structure and the rule of law” because it effectively creates a “constitutional free zone… in the heart of the nation’s capital.”

In April, President Joe Biden’s DOJ, led by Attorney General Merrick Garland, announced new policies and guidelines to limit the use of non-lethal force against protesters, partially resolving four lawsuits by protesters who had sued the Trump administration and federal law enforcement officials for racial discrimination Justice protesters were evicted from Lafayette Park two years ago.

Kishon McDonald, a former US Navy plaintiff, said he joined the lawsuit to “hold accountable those involved in attacks on protesters.”

“I shouldn’t have been attacked with tear gas and lightning while protesting for change,” McDonald added in an ACLU press release.

CLICK HERE TO READ MORE FROM THE WASHINGTON EXAMINER

The Trump administration has previously resisted the lawsuits, claiming that park police issued plentiful warnings to clear the park and denied that federal officials used tear gas. However, in June 2021, the Home Office found that DC police had used tear gas on protesters as they left the area, despite federal officials being told they were not permitted to do so.

The case is Black Lives Matter DC vs Trump and was filed on behalf of eight protesters who allege they were attacked by law enforcement without warning during the protests against Floyd and police violence.