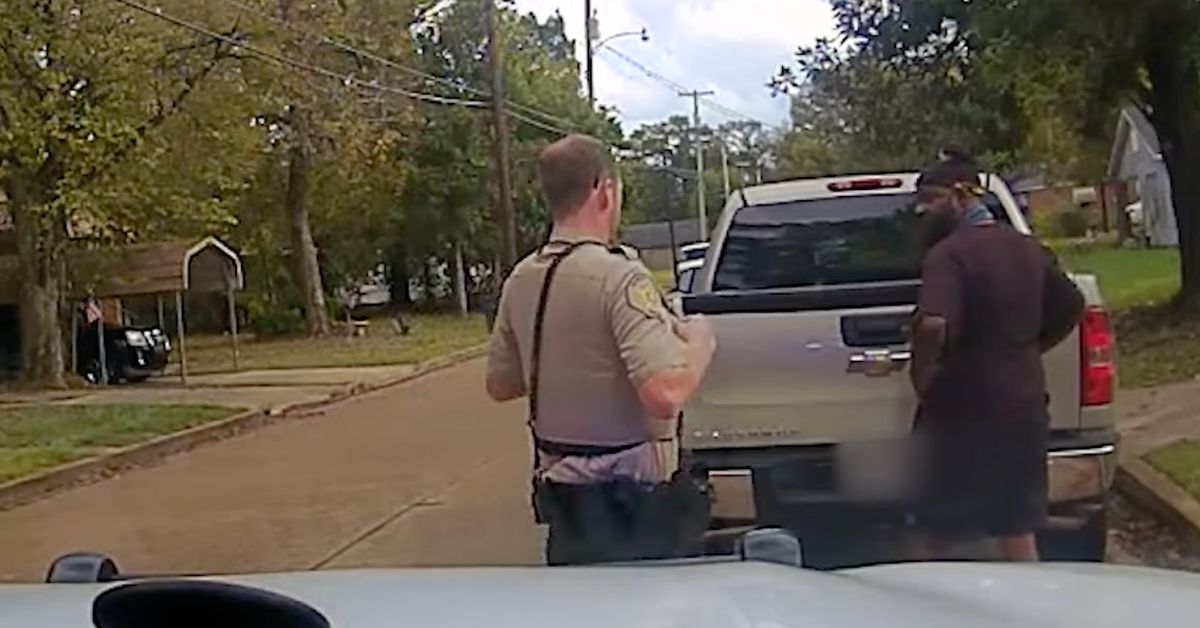 At a press conference, not only footage from Anderson’s body-worn camera was shown, but also footage taken by a passerby at the traffic stop.

In the video, Derrick Kittling, 45, is seen being pulled over by Deputy Rodney Anderson in Alexandria, central Louisiana while driving a Chevrolet Silverado pickup truck in a residential neighborhood during the day.

In the bodycam footage, as Kittling gets out of his vehicle, the deputy tells him to “stay there,” but also tells him to go to his truck, which Kittling was standing next to after getting out of the driver’s seat.

You never hear Anderson say why Kittling is stopped. When Kittling asks why he’s being pulled over, Anderson doesn’t answer.

Anderson then tells Kittling to “go over here,” but Kittling seems confused.

“Get to your truck,” the deputy says while Kittling stands by the truck’s door and the deputy stays in his car.

Anderson then gets out of the squad car and asks Kittling to keep his hands out of his pockets. Kittling then walks to the back of his pickup truck as instructed. Anderson grabs Kittling’s left arm.

“What is the problem?” Kittling asks Anderson.

Anderson says Kittling isn’t following his orders and tells him to turn around and face the truck. Kittling asks the deputy if he can get his phone, but the deputy replies “we’ll take care of it” and prevents him from getting his phone.

Kittling appears to remain confused throughout the encounter.

“It’s tragic what happened to Derrick, but unfortunately it’s more than likely to happen again.”

The deputy tells Kittling to put his hands behind his back several times, but Kittling, still confused, asks Anderson, “For what?”

At this point, just about 4 minutes and 30 seconds into the interaction, a fight begins.

The sheriff’s office said Anderson “lost control” of the taser and that Kittling recovered it during the fight while he was on the ground.

The officer fights with Kittling from different angles. The fight lasts about a minute, then the deputy fires a shot.

The deputy’s dashboard cam shows him carrying the gun and looking at Kittling while he’s on the ground.

Anderson then calls other officers and tells them he shot Kittling in the head.

Louisiana State Police Chief Col. Lamar Davis told local media during the press conference that Kittling was pulled over for a window tint violation and a modified exhaust.

When asked by reporters Sunday, the Louisiana State Police did not say whether Anderson had violated department guidelines.

“We also collect this information in relation to their protocols, their policies, their training and so on. And we will be able to better pinpoint that information as we receive it,” Davis said at the news conference.

Davis also said the agency did not determine whether Kittling was tased. Davis also declined to say if the taser ever hit Anderson during the fight.

“We cannot say for certain that he was actually tased or if the officer was tased. There is a lot that goes into exploring this topic.”

Protests have been taking place across Alexandria since Kittling’s deadly shooting.

“The sheriff’s department under current Sheriff Mark Woods has a plethora of issues when it comes to African Americans,” Rev. Randy Harris, an organizer and protester in Alexandria, told HuffPost. “It’s tragic what happened to Derrick, but unfortunately it’s more than likely to happen again. I have no faith in the sheriff’s department.”