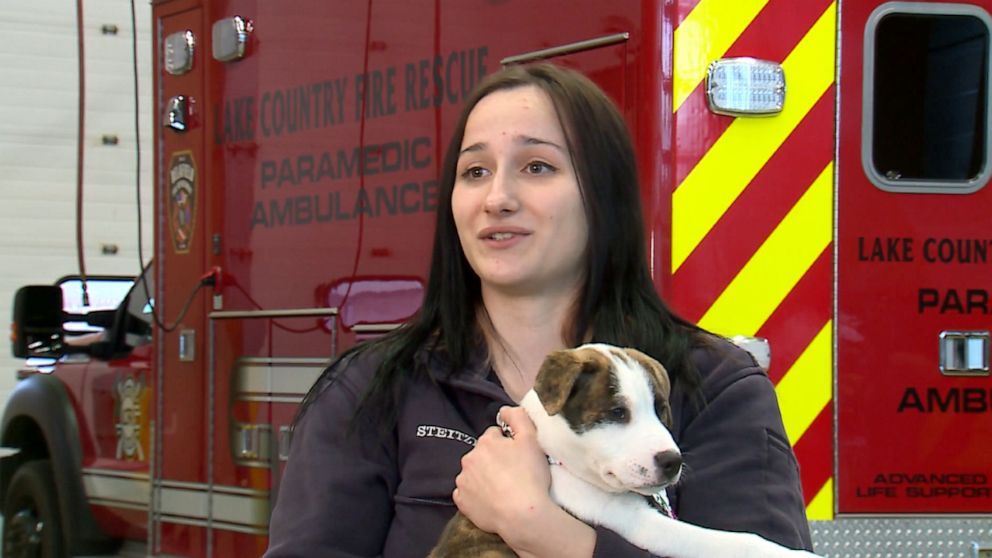 First responders who rushed to the scene after a plane carrying more than 50 shelter dogs crashed at a Wisconsin golf course this week helped save the pets in more ways than one.

The large twin-engine plane that was transporting the dogs from Louisiana to animal shelters in southeastern Wisconsin crashed Tuesday at the Western Lakes Golf Club in Pewaukee.

Three people and 53 dogs on board all survived, with some of the animals suffering minor injuries such as bumps and scratches. The three people were taken to a local hospital with non-life-threatening injuries, authorities said.

In the days after the crash, several first responders who worked at the scene adopted the dogs they helped rescue.

“When I found out everyone was fine, my first thought was that one of them would come home with me. So that’s my little lucky,” Elle Steitzer, a firefighter and paramedic with Lake Country Fire Rescue told ABC Milwaukee affiliate WISN while rocking her new pup.

Streitzer and two of her colleagues from the Lake Country Fire Rescue, who were deployed to the plane crash site, adopted dogs on Friday.

“He just fell out of the sky in front of me, so here he is,” Amber Christian, a firefighter and paramedic with the Lake Country Fire Rescue, told WISN about her dog, Artemis.

Deputy Chief of Police Tony Wasielewski said Marley jumped into his arms after the crash. The next day he visited them at the Humane Animal Welfare Society of Waukesha County, which took in 21 of the dogs involved in the accident.

“As they let her through the door, she walked past my wife, ran to me, sort of jumped into my arms, gave me kisses. I started crying a little bit and I was like, ‘Oh boy, I think we have a dog,'” Wasielewski told WISN.

The dogs were placed in animal shelters in counties across Wisconsin.

“We’ve had a few of them call and ask,” Stephanie Deswarte, a receptionist at the shelter, told ABC News.

“We don’t normally let people adopt until we have them on our website because we want to give everyone as fair a chance as possible. But obviously they were right there in the middle and they were trying so hard to help with the whole crazy situation that we sort of gave all the first responders first responders for adoption before they came on the site,” she continued.

“Something like this has never happened to us,” Deswarte said. “It was a miracle that everyone was really fine.”

Matthew Haerter, deputy chief of Lake Country Fire and Rescue, commended the pilot for what he called a “relatively disastrous landing.” The plane flew through trees and lost both wings before landing on the course.

“I think all of us together have a weakness in our hearts, especially for rescued dogs,” Haerter said during a Tuesday news conference. “And now to think that they have to go through this before they find their forever home.”

“It could have been a lot worse,” he said.

The local authorities did not comment on the cause of the accident. The Federal Aviation Administration is investigating the incident.