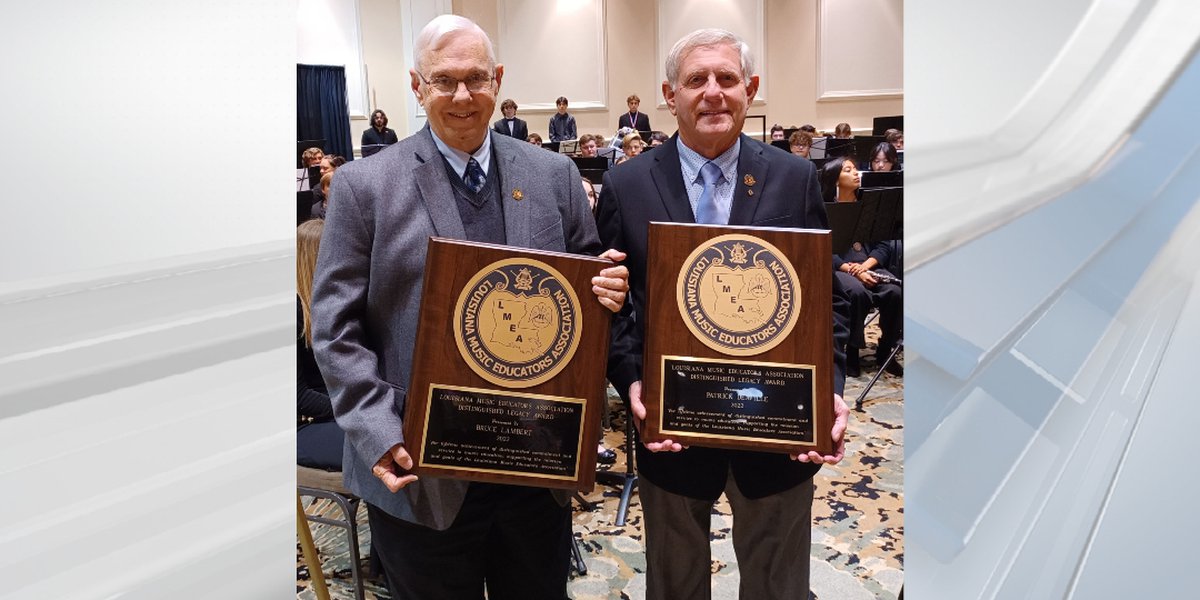 Baton Rouge, LA (KPLC) – The Louisiana Music Educators Association (LMEA) has presented its first Distinguished Legacy Awards to two McNeese State University graduates, each with over 50 years of dedication to the field of music education.

According to LMEA, the new award seeks to recognize lifelong achievement and outstanding service in the field of music education. It is awarded to individuals with 30 or more years of service who enhance their character, advance their professional interest, and otherwise advance the cause of music education in the state of Louisiana.

It was presented at the 2022 LMEA Conference and All-State Band Ensemble on Monday, November 21, 2022.

Patrick Deaville, a native of Jennings, earned a Masters of Education from McNeese State University and served as principal trumpet and drummer for the university’s bands.

He began his career as a music teacher in 1974 after serving in the US Army’s 18th Airborne Corps. He was band director at Jefferson Davis and Calcasieu Parish public schools for 20 years, including Lake Arthur High School, Jennings High School, Lake Charles High School, LaGrange High School, and SJ Welsh Middle School.

In 1993 he began a 20-year career as an assistant principal at SJ Welsh Middle School and Sam Houston High School. In 2000 he was then promoted to Music Supervisor of the municipality of Calcasieu.

He has also served as Editor of the Louisiana Musician, Chair of the annual Professional Development Conference, and Advisor to the LMEA Board of Directors.

Patrick Deaville has been described by the LMEA as an invaluable resource during decades of meaningful discussion, debate and decision-making. They say his greatest gift to the educators organization has been his uncompromising commitment to integrity, loyalty and excellence.

Bruce Lambert is a native of Oakdale and received his master’s degree in music education from McNeese State University.

In 1972, Lambert began his 35-year career as a high school and collegiate band director, teaching students at Zwolle High School, Kinder High School, Sam Houston High School and McNeese State University. He later served as an adviser on instrumental music for the school board of the municipality of Calcasieu.

Bruce Lambert was described by LMEA as someone who had a firm leadership style and a passionate focus on “doing the right thing for our students”. They say he enabled continued expansion of their organization and is credited as the chief architect of the organization’s modern organizational and financial superstructure.