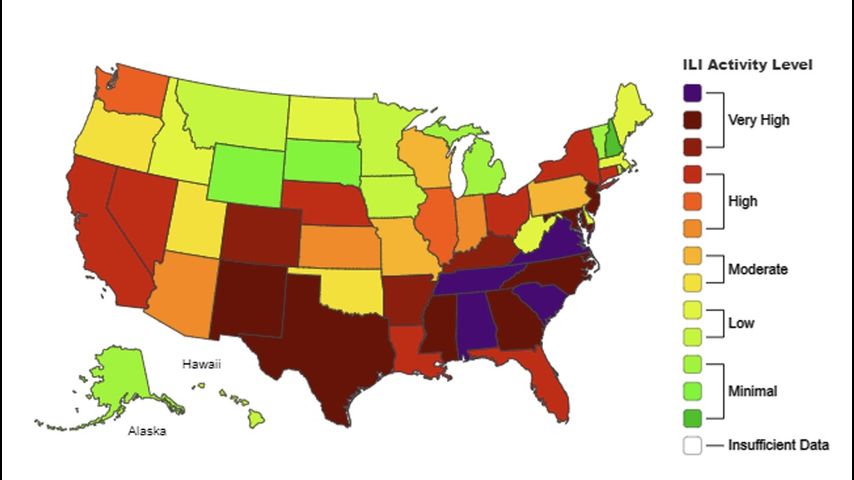 BATON ROUGE — Seasonal influenza activity is “elevated across the country,” with “high” or “very high” respiratory virus activity in more than half of U.S. states an update published Friday by the US Centers for Disease Control and Prevention.

And health systems across the country continue to feel the strain of a respiratory virus season that has hit earlier and harder than usual.

There have been about 8 flu hospitalizations per 100,000 people this season – rates typically seen in December or January. According to the CDC, the cumulative hospitalization rate at this point in the season has not been this high in more than a decade.

In Louisiana, flu-like illness-related activity is at a 5-year high and well above the national average. 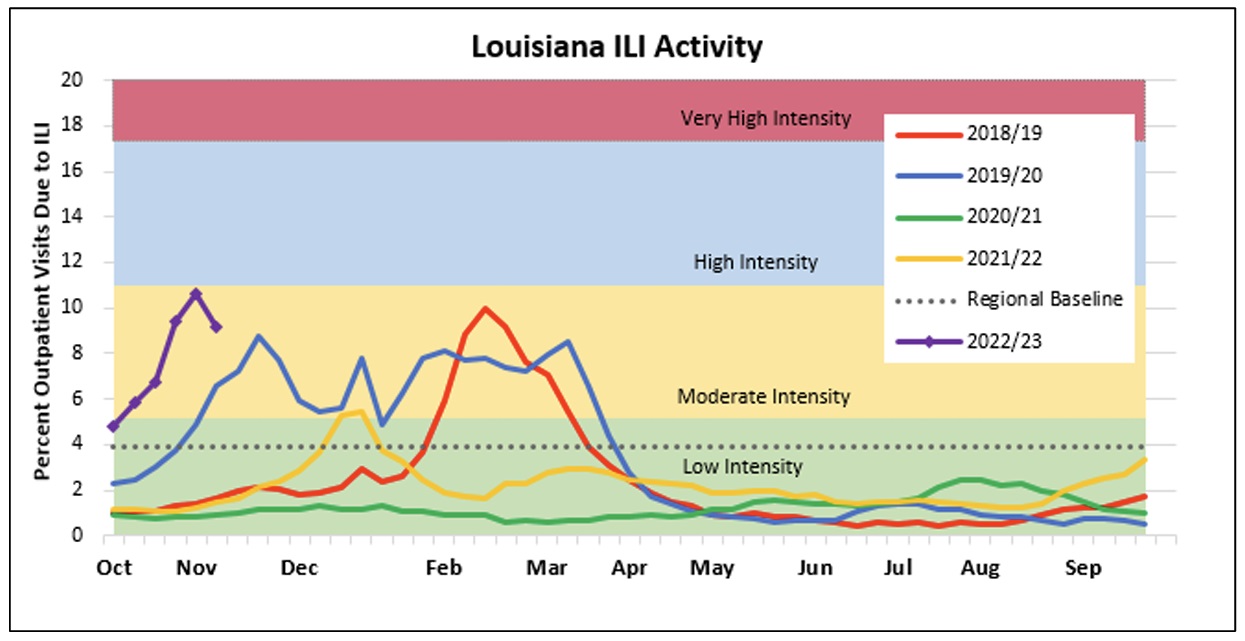 This week the American Academy of Pediatrics and the Children’s Hospital Association requested a formal declaration of emergency by the federal government to support hospitals and communities amid an “alarming rise in pediatric respiratory diseases, including respiratory syncytial virus (RSV) and influenza, along with the ongoing child mental health emergency.”

“These unprecedented RSV levels, coupled with rising influenza rates, persistently high rates of children with mental health crises and serious workforce shortages, combine to strain the capacity of pediatric care at the hospital and community levels to the breaking point. Because of these challenges, children’s hospitals and pediatricians must be encouraged to support more care and higher levels of care than ever before,” the organization’s leaders wrote in a letter to President Joe Biden and U.S. Secretary of Health Xavier Becerra. “We need emergency funding support and flexibility in the same way as what has been deployed to respond to COVID flare-ups.”

HHS data shows children’s hospitals have been busier than usual in recent months. More than three-quarters of pediatric hospital beds are in use nationwide, up from an average of about two-thirds over the past two years.

In Washington state, emergency rooms are in “crisis mode” and “bordering on, if not near, disaster mode,” said Dr. Tony Woodward, medical director for emergency medicine at Seattle Children’s Hospital, this week.

“Our ER department operates almost 100 percent 24 hours a day and 300 percent in the evenings, which means that for patients who come in for emergencies, [they] not treated immediately,” Woodward said.

“We’re all seeing and being asked to admit patients far away, and we’ve had requests as far away as Virginia and Missouri,” Morse said. “And we had to say no to these other hospitals in far-flung states so we could optimize our ability to care for patients in Ohio State.”

While RSV activity is showing signs of slowing down in the south, it’s still spreading across the country, with nearly one in five PCR tests coming out positive. And flu activity continues to be highest in the South. Data of Walgreens, which tracks prescriptions for antivirals like Tamiflu, suggests hotspots centered in Mississippi, Texas and Louisiana, spreading from Houston and the Gulf Coast region to Knoxville.

“It’s one thing at a time,” said Dr. Tina Tan, professor of pediatrics at Northwestern University’s Feinberg School of Medicine and vice president of the Infectious Diseases Society of America, at Friday’s briefing. “RSV has already overloaded or overloaded hospital systems. Now you have flu which is starting to go up in other areas where they are trying to deal with the RSV surge and you also have Covid which is starting to go up. It’s really putting a huge strain on hospital systems across the United States.”

The U.S. is in a different place this holiday season than in previous pandemic years, Dr. Ashish Jha, the White House Covid-19 response coordinator, told CNN on Thursday.

“I’m hoping we won’t see anything like the spike in January, but we may see a lot more infections in the coming weeks and months,” Jha said. “But the good news is that we can gather safely, we can do all of these things if people go ahead and get the updated bivalent vaccine that’s available and get treated if you have an infection. We’re just in a whole different place.”

CDC data shows that less than 5% of the US population lives in a county considered “high” in the Covid-19 community, a measure that captures the community’s transmission and hospitalization capacity. But for the first time in weeks, CDC projections suggest trends in new Covid-19 hospitalizations will rise in the coming weeks.

While the Covid-19 state of emergency remains in effect, the federal government has not issued a formal state of emergency regarding child healthcare. HHS and the CDC are in regular contact with healthcare leaders and providers, are actively monitoring situational needs, and stand ready to provide assistance on a case-by-case basis, an HHS spokesman told CNN.

“We have learned some things from Covid. masks work. Dust ’em off, bring ’em back out,” Schaffner said.

They are also urging all eligible individuals to get their flu and Covid-19 vaccines, as well as other routine vaccinations.

Routine vaccination rates have fallen during the Covid-19 pandemic and have not improved significantly. The situation is “pretty bad in the pediatric population because vaccination rates in some age groups are still 50% lower than before the pandemic,” Tan said. So there are a lot of unprotected children out there who are at risk of developing vaccine-preventable diseases.”

Children are also lagging behind on Covid-19 vaccination rates. According to CDC data, fewer than 5% of children under age 5 have completed their first series, along with fewer than a third of children ages 5 to 11.