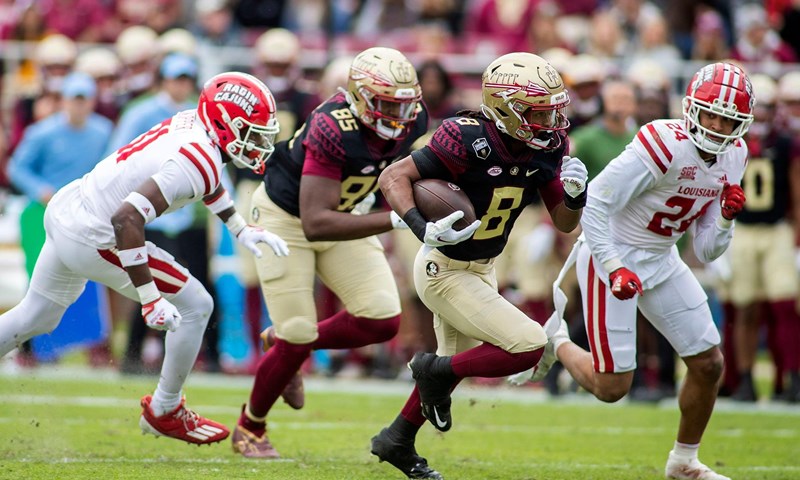 
Tallahassee, Florida (AP) Florida State scored on seven of its first eight holdings and quarterback Jordan Travis missed the entire second half as the Seminoles powered to a 49-17 win over the Ragin’ Cajuns at Doak Campbell Stadium on Saturday afternoon.

Travis completed 9 of 14 passes for 127 yards and a touchdown, rushing for two more points as FSU went 35-3 at halftime.

Trey Benson led a group of five running backs who gained 30 yards or more with 80 yards and a touchdown on 16 carries. Ten different FSU receivers caught a pass.

FSU’s defense suppressed Louisiana for most of the game, limiting the visitors to just 4 of 14 on third downs. The Seminoles recorded four quarterback sacks and six tackles for loss in the lopsided win.

Louisiana quarterback Chandler Fields finished the tournament with 19 completions on 36 attempts for 159 yards and a touchdown. The Ragin’ Cajuns’ top rusher, Dre’lyn Washington, rushed for just 57 yards on 10 carries, while Michael Jefferson led his receivers with six catches for 60 yards and a touchdown

Florida State came into play as the nation’s second-best team by scoring in a half’s opening drives. They kept that trend alive by rushing for 75 yards in their first eight games and scoring when Treshaun Ward lined up as quarterback and rushed 36 yards at center for a touchdown. Ryan Fitzpatrick’s extra point made it 7-0 FSU with 12:29 in the first quarter.

After holding Louisiana to their second straight three-and-outs, FSU made two consecutive touchdown drives on a quarterback keeper around Travis’ right side for a 3-yard touchdown. The 8-play, 65-yard drive made it 14-0 FSU with a 7:37 in the first.

FSU went 21-0 late in the first quarter on a 13-yard touchdown run by Travis topping a 7-play 53-yard drive.

Midway through the second quarter, Ward switched back to the Wildcat quarterback spot and made a 28-0 Seminoles from one yard with 6:59 left.

Malik McClain’s acrobatic catch of a 9-yard touchdown pass from Travis increased the Noles’ lead to 35-0 with 3:14 at halftime. The big play on the drive was a 32-yard reception from tight end Camren McDonald.

Louisiana’s only drive of any length at halftime came on her last possession. They started on their own 25 after a touchback and drove to Seminole’s 2-yard line before having to settle for a 24-yard field goal when the clock ran out.

Florida State’s defense allowed the Ragin’ Cajuns just 75 total yards at halftime and just 34 rushing yards. The Seminoles offense was extremely efficient as they converted 4-of-5 third down chances and only managed to punt once.

Tate Rodemaker checked in at the quarterback on FSU’s first possession of the second half and led the Seminoles to a 4-play 72-yard drive that ended with a 2-yard touchdown run by Trey Benson. The big play on the drive was a 45-yard pass from Rodemaker to Kentron Poitier.

On the ensuing possession, Fabian Lovett snatched the ball away from the ball carrier and Shyheim Brown went for the fumble on the Ragin’s Cajuns 18. True freshman AJ Duffy came in as quarterback and kept up the offensive fireworks that connected with tight end Markeston Douglas for a touchdown from 16 yards for a 49-3 score with an 8-22 in the third quarter. It was Duffy’s first career touchdown pass and Douglas’ first career TD reception.

Louisiana scored his first touchdown of the game with 11:07 left. The Ragin’ Cajuns rushed for 64 yards in 12 plays, went from the 5 in fourth place, and Fields found Michael Jefferson in the back corner of the endzone with a touchdown pass to make it 49-10.

The final result came at 5:16 on a short TD run that completed an 8-play, 64-yard drive against the FSU reserves for the final score 49-17.