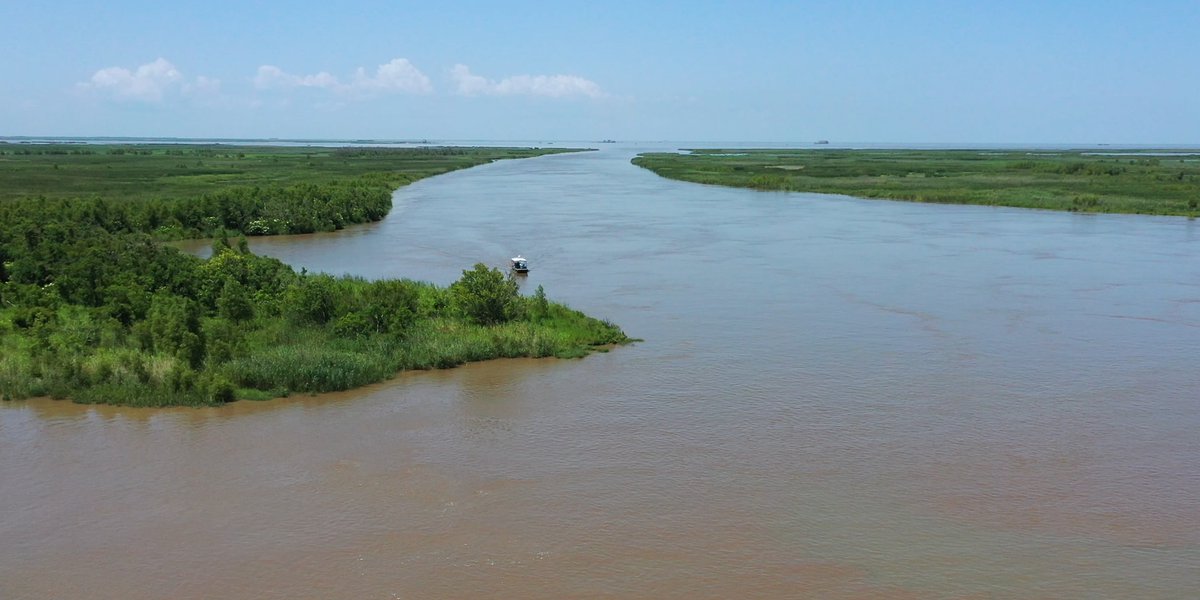 NEW ORLEANS (WVUE) — On a windy November afternoon, a boat ride along the east bank of the community of Plaquemines leads to a point where the Mississippi is no longer bound by levees.

Alisha Renfro, a coastal researcher for the National Wildlife Federation, sees Neptune Pass as a living laboratory, a real-world example of how nature made the river work.

“What we’re seeing along the Louisiana coast is that places where the river enters these shallow water areas keep gaining land compared to almost every other place in Louisiana where we’re losing land,” Renfro said.

This new channel dug by the river in the swamp is also causing controversy.

The US Army Corps of Engineers fear the pass will affect navigation in the main part of the river and plan to block most of the river with a rock barrier across the pass.

The Corps is currently soliciting public comment on its plan, which a spokesman said would restore water flow down the canal to levels recorded before the 2019 Mississippi flood event.

Coastal activists see Neptune Pass as a case for the Mid-Barataria Sediment Diversion Project, a much larger, man-made channel across the river.

The state has applied for federal approval for the diversion to be built in the Ironton and Mrytle Grove area about 20 miles south of Belle Chasse.

At peak times, the diversion would divert up to 75,000 cubic feet of river water and sediment per second into Barataria Bay, or nearly an Olympic basin per second.

“The key thing about these restoration projects is providing this diversity of habitat,” said Erik Johnson, director of bird conservation at the National Audubon Society.

A Corps environmental impact statement estimates that the diversion would build 21 square miles of land over 50 years.

Critics point to dredging projects such as Spanish Pass near Venice, where a giant offshore dredger piped 1,600 acres of new land in about a year.

“What would be water one day would have bulldozers on it the next day,” said Mitch Jurisich, chair of the Louisiana Oyster Task Force.

The EIS warns of serious negative consequences for the oyster grounds in the bay.

Critics argue for what they see as immediate land built at a higher elevation than emerging marshlands.

At Neptune Pass, Johnson said the free-flowing river “does both” a mix of marsh grasses, which provide important habitat for ducks and other species, and higher ground lined with fast-growing pastures.

“I think with two and a half billion we can build a lot of land by pumping and dredging,” counters Jurisich, who questions the rising costs of the project.

CPRA puts the total cost, including design, engineering, construction and mitigation, at $2.3 billion.

“I believe it’s the lifeline to south Louisiana and it’s worth every penny,” said Chip Kline, chair of the Louisiana Coastal Protection and Restoration Authority.

Critics point out that other costs are harder to quantify, such as the damage freshwater would do to hundreds of bottlenose dolphins in Barataria Bay.

Mitigation costs that would total $380 million, including everything from paying for refrigeration for commercial fishermen who are forced to travel farther for their catch, to seeding new oyster grounds.

“I can’t understand how anyone would think that creating land over 50 years at sea level would provide flood protection,” Nungesser said.

Although dredging is actually a larger part of the state’s 50-year coastal master plan, CPRA executives note that these projects are designed to last 20 to 30 years.

They say dredging isn’t changing the forces that have cost Louisiana an estimated 2,000 square miles of land since 1932.

“After a while, as you move away from this restoration project, it starts to settle, it starts to condense, the sea rises, and you’ve lost that after 20 years,” Johnson said.

Kline views dredging as a short-term solution to a long-term problem.

“The definition of insanity, as we say, is doing the same thing over and over again and expecting a different result,” Kline said. “So we have to change things.”

Next month, at a pivotal moment, the Corps will decide whether to issue the necessary permit as it discusses the ins and outs of the state’s most ambitious plan to reclaim some of its lost lands.