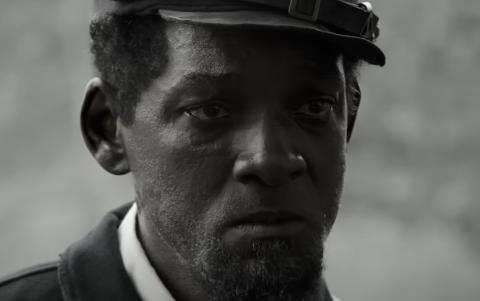 In 2022, actor Will Smith made his name twice. First, when he slapped comedian Chris Rock in the middle of the Oscars after he made an inappropriate joke about his wife. Then, as he tearfully collected his award for best actor King Richard (2021), a feature film about the turbulent life of Richard Williams, father of world-famous tennis players Venus and Serena. This year, the Hollywood star is back on Apple TV on December 9th emancipationa new film by African American director Antoine Fuqua (Training Day, The Equalizer). One might have expected an appearance from his favorite actor, Denzel Washington, to whom Will Smith also tipped his hat as a producer. In the footsteps of Edward Zwick glory (1990), with Denzel Washington at the top of his game, or Steven McQueen’s masterpiece Twelve years as a slave (2013), Antoine Fuqua takes us back to America’s darkest moments in the 19th century in a biopic that feels like a period drama. in the emancipationWill Smith plays the role of Peter, a black man who escapes his condition as a slave by fleeing through the swamps of Louisiana while his torturers hunt him down… A work inevitably remembered root (1977), a four-episode miniseries that tells the story of Kunta Kinté, a Gambian-born man who was captured and then shipped to America to be sold as a slave. Renamed Toby, he discovered that other American-born slaves were unaware of their African origins. After several attempts to escape, his masters finally amputate his leg to prevent him from making another escape…

2. A chilling portrait of the atrocities of 19th Century America

Emancipation translates four hundred years of slavery into a single photograph entitled The Scourged Back. The image is horrific and conclusive evidence as it shows the naked and mutilated back of Gordon, now Peter, played by Will Smith. This authentic photograph was taken by McPherson & Oliver during a medical examination at a Union Army camp on the Mississippi River in April 1863. It was published as a woodcut in Harper’s Weeklythe famous political weekly in New York, and helped change America’s view of slavery at the time… After the Oscar slap scandal, Apple TV hesitated before agreeing to produce emancipation with Will Smith, unwanted person, to be seen in the leading role. However, Antoine Fuqua silenced any controversy in Vanity Fair columns: “For me, the film is bigger than the moment. Four hundred years of slavery is greater than a moment. I hope that people will take that view and watch the film and get carried away by the great performance by Will and all the really tough words from the whole crew. There have been some really ugly things that have happened in Hollywood, and we’ve seen a lot of people who have won awards doing really ugly things. I think Apple has taken all of those things into account.”