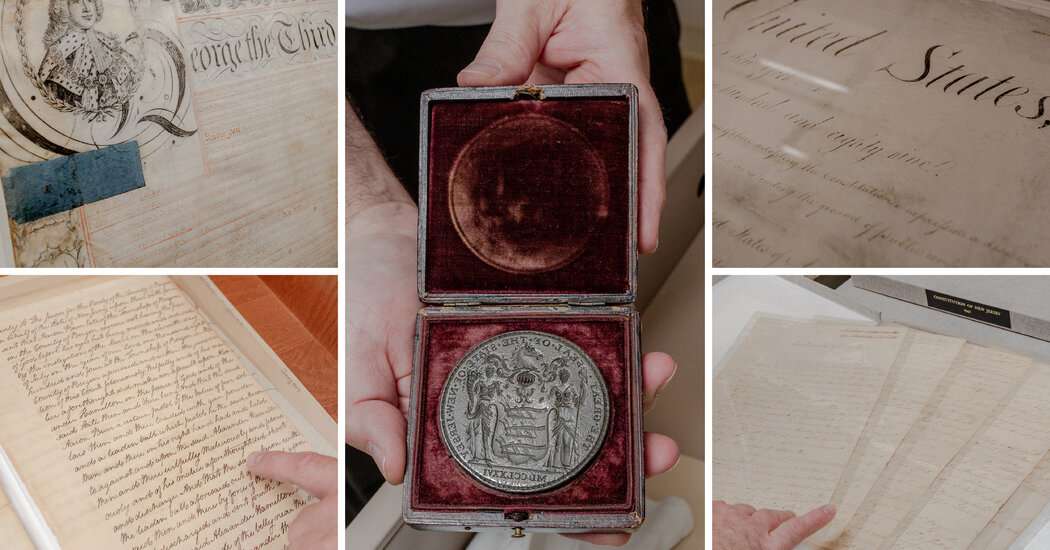 The 13th royal governor of colonial New Jersey was a Philadelphia-born, London-educated barrister whose appointment was confirmed by an elaborate document bearing the seal of King George III. was solemnly sealed. The governor’s name was both familiar and surprising: “Our faithful and well-beloved William Franklin,” was how the 1763 royal commission, Benjamin’s son, described him.

In ornate handwriting and red language, the commission expressed on three pages of parchment “special confidence and confidence in the prudence, courage and loyalty” of William Franklin and enumerated his powers to preside over the colony as representative of the Crown did until 1776, when his father was among the signers of the Declaration of Independence, the document that fired him.

“He didn’t know he was going to be our last royal governor,” said Joseph Klett, as he opened a drawer in a vault in Trenton, where he works as director of the state archives. “William Franklin was exiled to England for the rest of his life, and he brought this document with him.”

Franklin’s royal commission sits in air-conditioned darkness, a story without an audience, locked in an anonymous office building a block from the New Jersey State House. The king, the founders, loyalists, patriots, the revolution, the murderous wars within colonies and even within families – the epic story of the nation’s birth runs through every filigree line in a document that has last been shown publicly for a single day longer was than a decade ago.

New Jersey is a dense, forgetful state that has plastered over, overturned, or simply overlooked much of its rich revolutionary history. It lacks a fixed focus like Boston, Philadelphia or Williamsburg where its treasures could be exhibited and its story told.

In the same drawer in the vault is kept a companion to the Royal Commission: the original, ink-stained, handwritten state constitution, signed July 2, 1776, declaring New Jersey’s independence from Britain and rejecting the authority of Governor Franklin, who had done so already been arrested.

In the vault, Mr. Klett kept opening drawers to show one priceless artefact after the other.

“This is our birth certificate,” he said, showing the 1664 parchment of James, Duke of York (later King James II), who deeded the territory of New Jersey to Lord John Berkeley and Sir George Carteret.

He pulled out what appeared to be an oversized silver coin. “One of the first tasks in 1776 was the creation of the state seal,” he said, while holding the original cast used to stamp the new state’s official documents, pointing out the forward-facing helmet, a symbol of self -Government and Independence from Great Britain.

“There are only 13 of these,” he said, opening another drawer. It was the first printing of the US Constitution, another copy of which was auctioned last November for $43.2 million.

In another flat file was an 1804 document that any “Hamilton” fan would immediately recognize: “The State of New Jersey v. Aaron Burr: Indictment for Murder.

“It’s going to be a little bloody,” Mr. Klett said as he read how the “lead bullet” from a “five dollar handgun” left a wound four inches deep and two inches wide “on the right side of the abdomen” of the said Alexander” – that would be Hamilton – “near the short ribs.”

But with so many riches, why doesn’t New Jersey treat its history with the same deference as, say, Massachusetts? “Or Pennsylvania, or Delaware, or Maryland, or New York?” asked Mark Lender. As history professor emeritus at Kean University in Union, NJ, he “lived in the archives,” he said, while he was a graduate student at Rutgers University. His dissertation became the first of his many books on revolutionary New Jersey.

“More wars were fought in New Jersey than in any other state — about 600, perhaps more, military incidents between 1775 and 1783,” Professor Lender said. “Consider you had the de facto rebel capital in Philadelphia and the main British garrison in New York: the only way these guys could reach each other was through New Jersey. Something was happening somewhere every week and you could never tell when it was going to hit you.”

One problem New Jersey faces is that all of these places are located throughout the state and are not concentrated in tourist-friendly clusters like Massachusetts or Pennsylvania. You can hike the Freedom Trail in Boston or visit Independence National Historic Park in Philadelphia, but to learn about New Jersey’s role in the revolution, you’ll have to travel from one end of the state to the other.

“We may know how it happened in our own little area, but we don’t know how it relates to things in the rest of the state,” said Patrick Murray, the director of the Monmouth University Polling Institute and a former executive chairman of Crossroads of the American Revolution, a nonprofit group formed 20 years ago to highlight this rich and complex chapter in New Jersey history. His own small area was near his childhood home in Gloucester County: Red Bank Battlefield on the Delaware River. “We never told this story from a state perspective,” he said.

New Jersey’s Revolutionary War sites — from George Washington’s winter camp in Morristown (a national park) to small local museums run by volunteers one Sunday a month — are loosely connected to what the federal government dubbed in 2006 the “Crossroads of the American Revolution National Heritage area, the only one of the 55 national heritage areas dedicated to the revolution. The non-profit organization Crossroads has been appointed by the state to manage the heritage area. Ahead of the 250th anniversary, the state paired Crossroads with the New Jersey Historical Commission in a public-private partnership to plan how it would be marked.

But semiquincentennial is harder to say than bicentennial and harder to sell. Crossroads requested $46 million for Revolutionary War sites in the most recent state budget; the state provided $25 million. No money was allocated for the Revolutionary War Experience Center that the group has proposed for the State House site — a central hub that could take visitors to historic sites across the state and display a rotating selection of items from the archives, which last became a public exhibition area in the 1970s and is now mainly frequented by genealogists and historians.

“These are such insane assets that almost no one has seen,” said Crossroads CEO Sally Lane, who visited the vault with Mr. Klett. “The archive is a treasure trove and it is filled to the brim. We have unimaginable riches that we could continue to show people. It’s a missed opportunity.”

Mr. Klett opened drawer after drawer—the 1677 charter of the Quaker colony in West Jersey; New Jersey’s parchment copy of the US Bill of Rights; the Record of Congress of 1787 Ratifying the U.S. Constitution; a copy of legislation passed by Congress sent to New Jersey and signed by Secretary of State Thomas Jefferson.

And what’s in the vault is just a tiny fraction of what’s in the 40,000 cubic feet of storage space on the archive’s two floors—the documents, deeds, manuscripts, maps, photographs, and all other kinds of records, the stories about everyone Facets of tell the story of the state. Mr. Klett slid the last drawer back into place, turned off the light, and closed the heavy door, locking away Franklin’s royal commission and all its attendant treasures in their dark and silent home.

“People might say, ‘Nobody cares about the Revolutionary War,’ but it’s on the news every day, with all these discussions about democracy here, and what did the Founding Fathers mean by that?” Mrs Lane said. “The unfulfilled promise of the American Revolution is what we are all struggling with.”