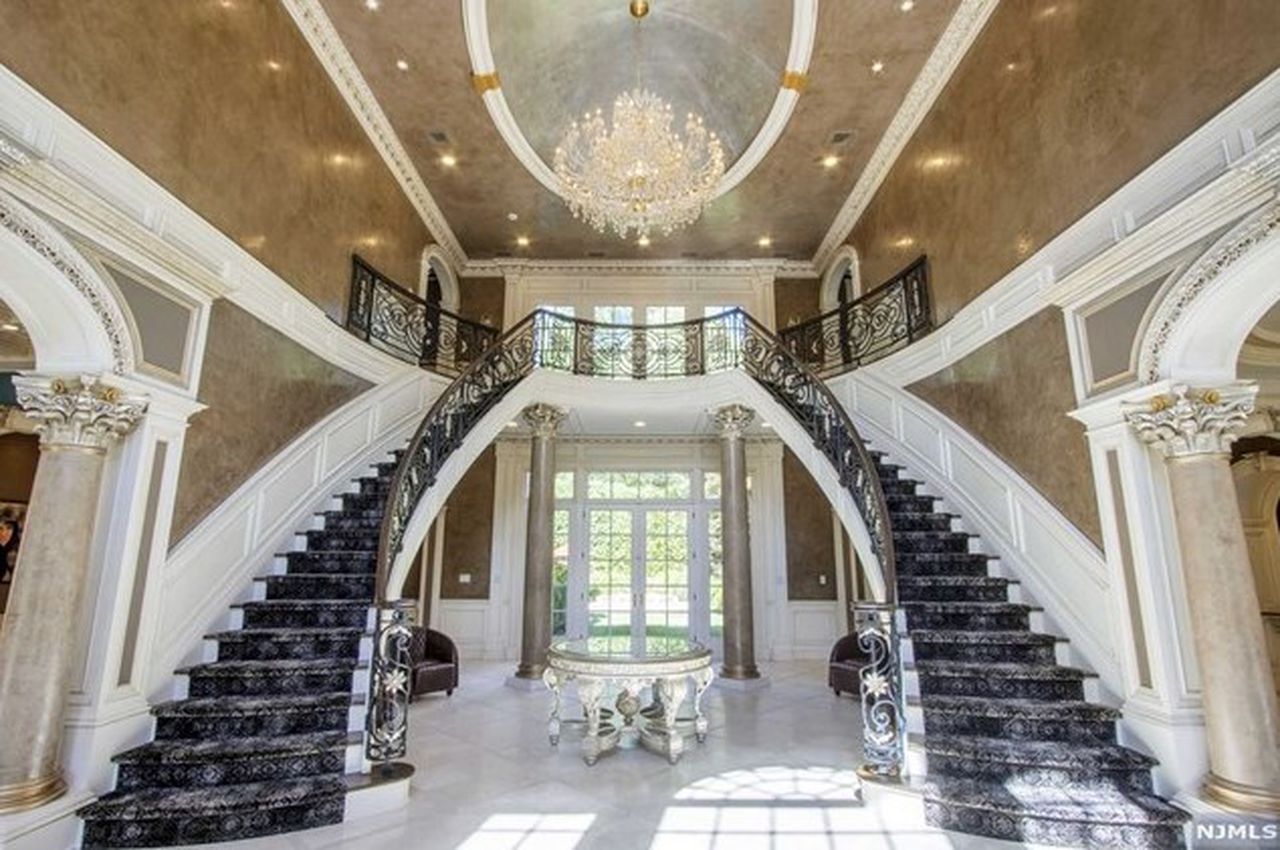 It was referred to as the Motown Mansion.

“There were parties with a variety of superstars – Mariah Carey, Stevie Wonder…” notes real estate agent Michael “Mr. Saddle River” Randy, who is the listing agent for the property brokered by Coldwell Banker Residential Brokerage of Allendale. “There’s still a piano in the house that Stevie Wonder used to play for all the guests.”

While it’s uncertain if the keyboard will be part of the home sale — “I can’t comment on the future of the piano until a buyer and the current seller decide,” says Randy — the five-bedroom, 5-acre home has hit potential for themselves.

Located on a double cul-de-sac in the Chestnut Ridge section of Saddle River, this stately 10,000 square foot brick and limestone building was constructed in 1999.

Upon entering the double mahogany front doors, visitors are greeted by an opulent foyer with a vaulted silver leaf ceiling and a wrought iron staircase leading to the second level. The ground floor features an award-winning kitchen (more on that later), living room, dining room, family room, bedroom, billiards room with bar, and the “music room” which features the Stevie Wonder-adorned piano.

The second floor features three en-suite bedrooms and a 3,000 square foot master suite wing with a lounge, multiple walk-in closets, an onyx and marble clad bathroom and access to a balcony.

The exterior features a courtyard with a three-tiered fountain, swimming pool with spa and cabana, and an eight-car garage.

Massenburg had the home built just a few years after he was named President and CEO of Motown in 1997 at the age of 36.

A Brooklyn native, Massenburg quickly made a name for himself in the music industry after founding his own entertainment company in the mid-1990s. According to Billboard, he’s been responsible for nurturing the careers of such notable artists as Erykah Badu and D’Angelo. He is also credited with coining the term “neo-soul” to describe the music genre that blended hip-hop and electronic music styles with traditional rhythm and blues.

Massenburg left Motown in 2004 and put the Saddle River estate up for sale in 2010. Since then he has managed his own record label, founded his own drinks company and has been involved in film, most recently as a producer of the Al Sharton documentary “Loudmouth.”

The Villa at 11 E. Denison Drive has continued to attract attention. It was featured on luxury real estate blog Homes of the Rich in 2012, and its kitchen — renovated by eventual owner Julie Ferrara and designer Peter Salerno in 2016 — was named HGTV’s “Best Kitchen in America 2017,” according to Randy. It was also the subject of a “Living Large” segment on CBS New York in 2017.

The house was sold to its last owners, Jason and Fatima Ronchi, in April but is back on the market.

And if the next owners play their cards right and have Stevie Wonder play the piano as part of the home purchase, they don’t have to worry if they can’t play: the keyboard has a player piano function.

Are you an agent, buyer or seller active in this changing market? Do you have any tips on the New Jersey real estate market? Unusual offers? let us know.

Patrick O’Shea can be reached at [email protected].

Extravagant New Jersey home with links to Macy’s Parade, the Titanic on the market for $1.88 million

This $1.1 million mansion for sale in NJ has the nation’s first county park as a direct neighbor