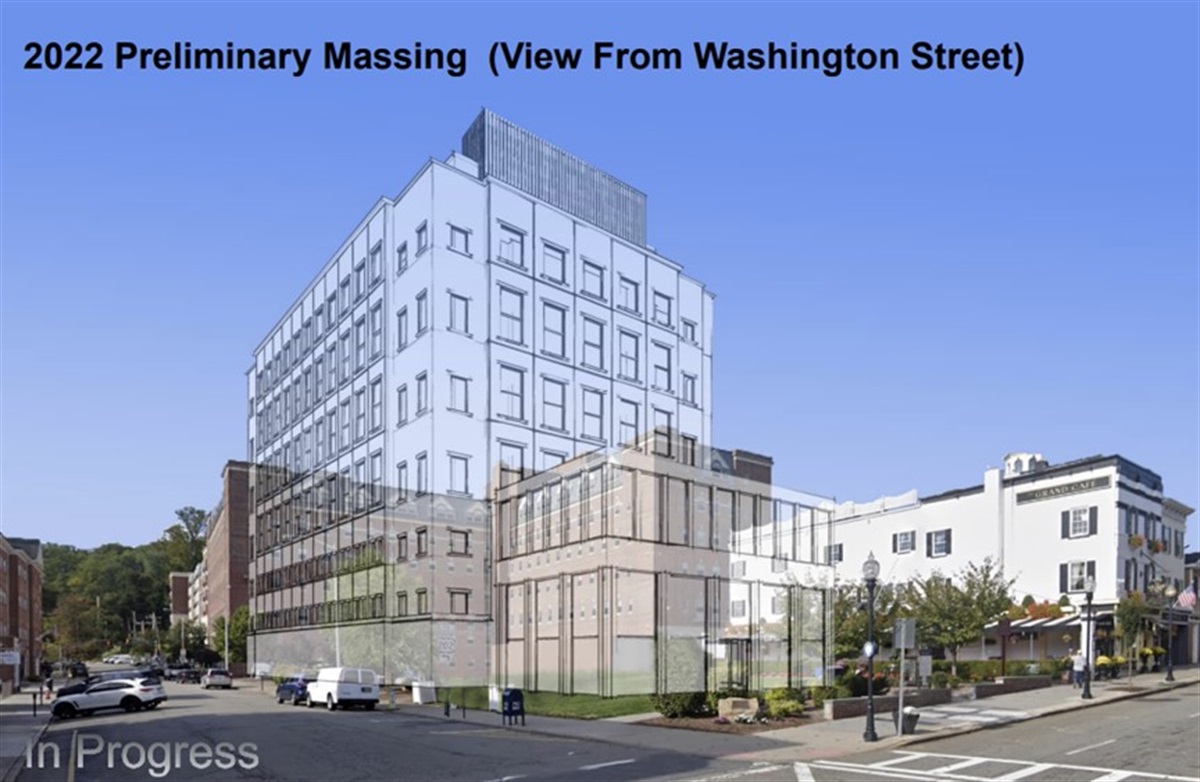 The Morris County Board of County Commissioners this evening approved the continuation of the schematic design phase for a new courthouse earmarked for a state-owned lot at Schuyler Place in Morristown after reviewing a revised, preliminary concept during a public session.

The vote followed a PowerPoint presentation to the full board and public by Roger Lichtman and Lisa Tsang of Clifton-based infrastructure firm AECOM, who were originally hired on the project in November 2019.

The COVID-19 pandemic interrupted action on what had evolved after 2018 into a 140,000-square-foot design proposal in 2020. After some reviews and a reboot of the courthouse plan last July a 116,998 square foot, less expensive proposal emerged and was shared tonight by the Courthouse Committee of the Board of Commissioners.

“It is important to note that we are not permitting or building the courthouse at this time. The aim this afternoon is to have questions answered and consensus from the Board to allow AECOM to move from the conceptual design phase to a schematic design phase,” said Commissioner Stephen Shaw, Chair of the Judiciary Committee. “This is the first time the Commissioner Board and the public have seen the full review of this recommendation. As we move through the design, we will engage representatives from the judiciary, the sheriff and the district attorney’s office, and representatives from Morristown.”

Look at the PowerPoint

Sheriff James Gannon, Morris County Attorney Robert Carroll, and Assignment Judge Stuart Minkowitz attended the meeting to discuss the need for the new courthouse and the Courthouse Committee and AECOM for working closely together to develop various conceptual designs in the last few years to thank years.

Commissioner Deborah Smith, another member of the Judiciary Committee, noted that a state-owned pocket park at the corner of Schuyler Place and Washington Street that would have been fully covered by some previous concept designs is now largely preserved in the new concept design.

“I am very pleased with the results of the redesign. It preserves a good part of the park, which is very important. The county created this park many years ago by removing an old building, and it is heavily used by people. I think it adds to the attractiveness of the whole proposal,” said Commissioner Smith.

The overall size of the project has reduced, as has the overall cost of calculating inflation – a point noted by Commissioner Douglas Cabana, who is also a member of the committee.

“We needed to develop and evaluate alternatives to the 2020 plan, something that addresses post-pandemic realities, reduces costs, balances staffing needs with the public good, and ultimately still provides appropriately expanded court facilities that meet the needs of the state judiciary in Morristown, which falls under the jurisdiction of the county,” said Commissioner Cabana.

The new conceptual design, unveiled last night, includes eight courtrooms but a reduction of 23,000 square feet from the 2020 proposal. The new design also adds a 200-seat jury room and eliminates previous proposals to move some county and court divisions in the new facility.

The provision of adequate court facilities and the safeguarding of such facilities are the sole responsibility of each county in New Jersey. In order to determine this need, the district commissioned an evaluation of space requirements and facilities in 2017.

This assessment, completed in 2018, identified a serious lack of criminal, family and civil court facilities and described the outdated conditions in the existing courthouse complex, which includes the historic courthouse along Washington Street, originally built in 1827.

This building was expanded three times before 1900, according to Judge Minkowitz, with more portions added in the 1950s and 1970s. The Washington Street complex between Court Street and Western Avenue will remain, but is not suitable for the continuation of most court operations.

The County Commissioners, then known as the Freeholders, held public hearings before unanimously deciding in late 2018 to pass two capital ordinances to fund the design phases of a new courthouse at Schuyler Place. Balancing the needs of the judiciary and the financial concerns of the county taxpayers continued throughout the process and involved the county government administration, commissions, members of the judiciary, and the sheriff’s office.