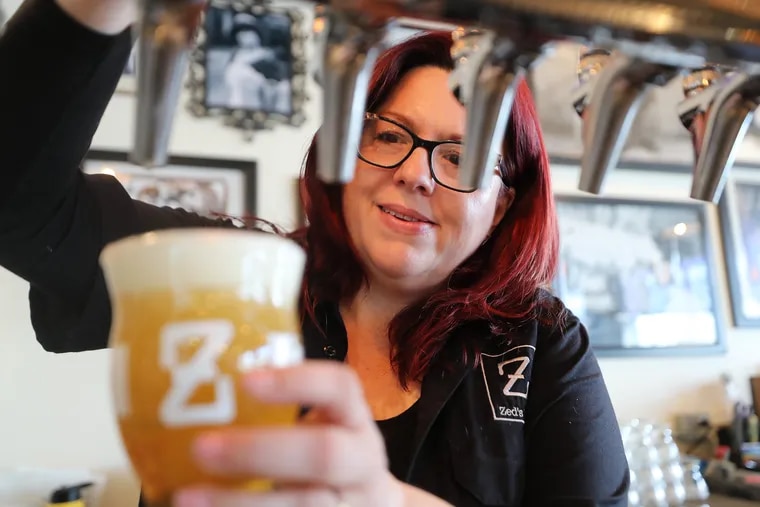 Thirsty for a craft beer at a New Jersey brewery? Just remember a few rules:

No sipping before a mandatory brewery tour. No ordering of nachos as there are no kitchens. You won’t find coffee or coke for your non-drinking friends either. Don’t expect more than two TVs — each must be no larger than 65 inches by the state of New Jersey.

Note that the brewery is only allowed to hold 25 “special events” annually, such as trivia contests, fundraisers, and open mic nights. There are also provisions regarding the advertising of these events as well as the televising of championship sports games such as the World Series.

“People say the rules can’t be as ridiculous as they sound,” said Lori White, co-owner of Zed’s Beer in Marlton. “They are.”

The New Jersey Division of Alcoholic Beverage Control (ABC) initiated the regulations based on the 2012 state legislation that designated brewers as manufacturers with beer tasting rooms — not bars. The idea was to promote breweries without siphoning off business from bars and restaurants that pay $500,000 or more for liquor licenses. Manufacturer licenses for breweries range from approximately $1,250 to $7,500.

In a statement Thursday, ABC director James B. Graziano said the agency will “support craft brewery owners in their efforts to grow their businesses … and promote fairness in New Jersey’s resilient alcoholic beverage industry.”

The ABC has long claimed it was wrongly implicated as the originator of draconian regulations, said it obeys state laws and has encouraged compromises between breweries, bars and restaurants.

“These rules don’t exist in any other state,” said Jamie Bogner, editor of Craft beer and brewing Magazine at Ft. Collins, Colo. “New Jersey is making it impossible for brewers — including limiting how much beer breweries can make.”

Currently, a bipartisan group of state legislators is sponsoring bills to ease restrictions. Senator Michael Testa (R., Cape May County) called the “disastrous” regulations “an affront to the freedoms breweries should enjoy.”

In September, Death of the Fox, a brewery in Clarksboro, Gloucester County, sued the ABC for “attacking small breweries.”

Around Thanksgiving and through January, a group of New Jersey brewers will begin selling an India Pale Ale called Brew Jersey as a statewide fundraising mechanism to persuade state legislatures to “fix a broken system.” Eric Orlando, head of the Brewers Guild of New Jersey, which represents 50 of the state’s 141 breweries. (Pennsylvania has about 350.)

The IPA’s recipe will be posted on BrewJersey.com to allow any brewer to make and sell the beer and donate the proceeds to advocacy. Each can of beer will have a QR code informing consumers how to participate.

Brian Sappio, 43, of Marlton, is a Zed client and entertainer who plays guitar at breweries in South Jersey.

“The brewery crowd is more receptive and tips more than the bar crowd,” he said. “Craft beer people are close-knit and welcoming. It’s not a place to get drunk. You can bring your children with you.”

White agreed, “Every brewery has its own culture, identity, history.” But as breweries grew in popularity, she said, liquor license holders fought to “make breweries less interesting.”

That’s “as far from the truth as you can get,” said Diane Weiss, executive director of the New Jersey Licensed Beverage Association.

Her organization wants breweries to thrive, she said, and sell their beers in local bars and restaurants. “No one fears competition,” Weiss said.

But, she added, as manufacturing license holders, brewers are given “privileges they don’t deserve: selling beer by the glass and hosting special events.”

If breweries want to be unleashed, “get the right license,” Weiss advised, meaning the expensive spirits license.

Brewers say brewery equipment can cost $1 million or more to purchase, assemble and maintain, and they’ve likely exceeded the cost of a liquor license.

Regardless, Weiss said, “We don’t lobby against breweries. We oppose how they are trying to turn their licenses into something more.”

Relations appear to be improving when it comes to restaurant owners with liquor licenses.

Voorhees attorney James M. Graziano, attorney for the New Jersey Brewers Association (not related to ABC director James B. Graziano), said, “I don’t think restaurants have many problems. Bars are still lobbying against us, but restaurants know brewers don’t want to put kitchens in.”

Robin Winzinger, owner of Robin’s Nest restaurant in Mount Holly, said she was divided on breweries: “You can sell alcohol without paying huge royalties. That’s not fair. But breweries near me attract younger crowd who come here to eat after drinking. That’s okay for me.”

However, the inability of breweries to offer non-snack single-serve food creates problems.

While customers are allowed to take away meals from restaurants, breweries cannot make their own arrangements with those restaurants to regularly prepare and deliver food, said Jay Mahoney, who owns Third State Brewing in Burlington City.

“We can’t even coordinate with food trucks that aren’t allowed to park outside our doors,” Mahoney said.

Things are different in Pennsylvania: breweries are allowed to have kitchens. In fact, Commonwealth law requires breweries to have food available “sufficient to form breakfast, lunch or dinner” because drinking without eating speeds up intoxication. Research shows that the water in food dilutes alcohol, while proteins and fats slow alcohol absorption.

“New Jersey is the only state I know of that bans food,” Bogner said.

More important than meals, brewers say, are the restrictions on special events.

“The state goes too far in telling us what we can and can’t do within our own walls,” said Clint Brown, operations manager at Farmers & Bankers Brewing in Woodstown, Salem County.

Breweries must register their 25 annual events with the state. At a 26th event, the brewery is threatened with losing its license.

“We could use all 25 in three months,” owner Mike Melniczuk said, adding that New Jersey breweries are only allowed to host 52 private parties a year. “You need these things to bring people in.”

Burdened with so many restrictions, he said, “You could see Jersey breweries moving to Delaware or Pennsylvania.

“Does this make sense?”