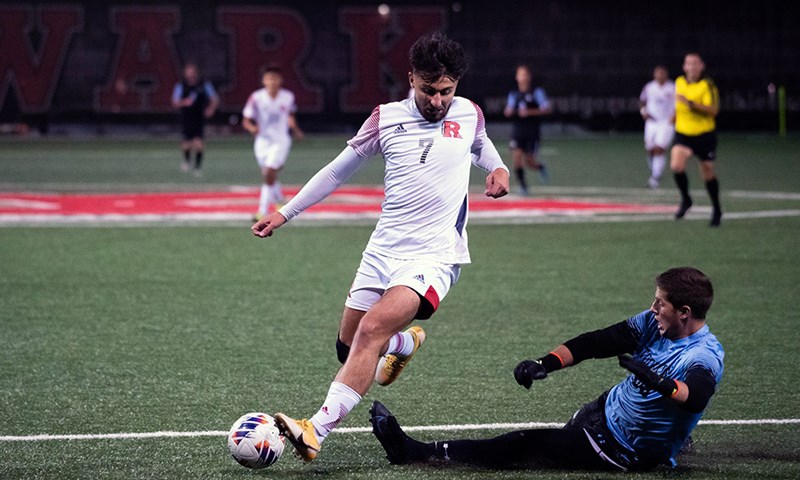 Rutgers Newark was aggressive early in the first half, attempting 6 shots with 4 on target before NJCU had a registered shot attempt. The Scarlet Raiders nearly scored in the 13th minute, but an NJCU defender assisted his keeper by heading the ball off the goal line to keep it 0-0. That sense of relief was short-lived, however, as Rutgers Newark came back immediately a minute later to score the game’s first goal. It was a mistake in the penalty area that left Moreno alone with the ball near the penalty mark. Moreno’s left-foot shot easily beat NJCU to give Rutgers Newark a 1-0 lead.

The sides seemed to settle into neutral territory with quite a bit of play after that goal, but Rutgers Newark struck again with a nice free-kick to double their advantage. The foul happened 30 yards from the net, but Dias’ kick was perfectly hit, crossing the wall and arcing into the top left corner of the net over a jumping NCJU keeper.

The Scarlet Raiders, with all the momentum in their favor, sensed an opportunity to make a stronghold of the game. They maintained their attack in the closing minutes of the half, and in the 42nd minute their rush and precise passing led to a third first-half goal. A loose 50-50 ball was spotted by Joe Alba and passed to a teammate in midfield. The ball was immediately promoted to Ryan Caruso, who was open on the right wing. After Caruso missed a defender, Catania fed a through ball that sank his shot into the bottom left corner of the net and gave Rutgers Newark a 3-0 lead at half-time.

NJCU, who needed a quick offense in the second half to close their deficit, got on the board in under 3 minutes of the second half. Rutgers Newark goaltender Christian Andrach came out of the box to clear the ball, but a misunderstanding between him and the defense and the speed of NJCU’s Fallas proved costly as Fallas got the ball first, and took a touch around Andrach and hit to put the Gothic Knights on the board.