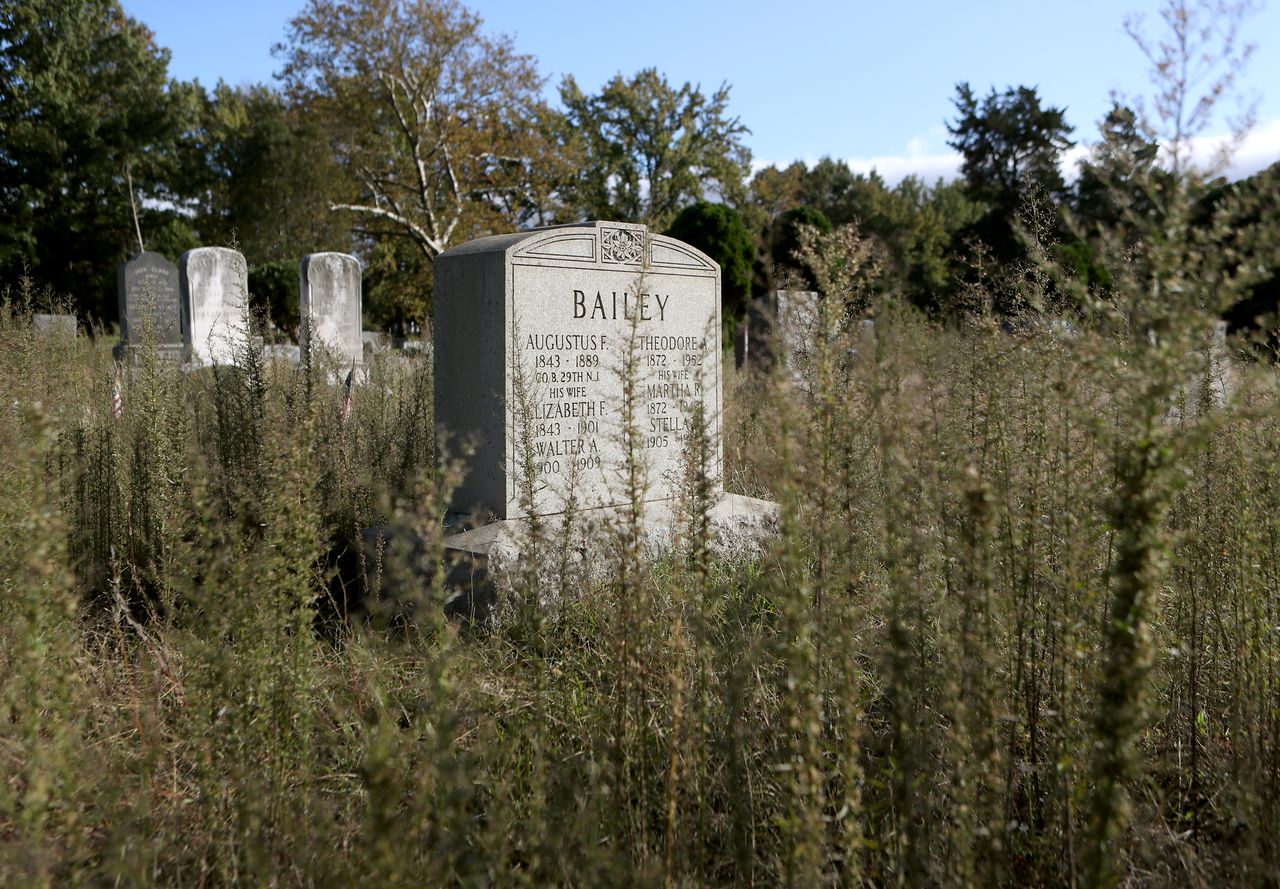 Armed only with a weedwacker, cigar-smoking 75-year-old Dave Kite does his best to fight the ever-growing grass that overgrows the headstones of Cedarwood Cemetery in Hazlet.

For 30 years, Kite has been caretaker of the 3-acre burial ground along Florence Avenue, home to 2,000 souls, including Revolutionary War veterans, politicians and residents of Hazlet and Keyport.

But he hasn’t received a paycheck for the past three years. A handful of people pay him out of pocket to maintain their families’ properties, but Kite feels obligated to keep up with the rest as well.

Cedarwood Cemetery is considered abandoned by the New Jersey Cemetery Board after the last member of the Cedarwood Cemetery Board of Trustees resigned in 2020, citing an ongoing dispute with the community over a crumbling wall, which the board said it could cannot afford to fix them. according to one of its former members and records between Hazlet and the former board.

Since then, many families say they must be wondering why it’s passing if not out of their own desire to make it look respectable. They wonder why more than $130,000 remaining in two of the cemetery’s trust funds as of 2018 cannot be used for necessary maintenance and repairs. But no one — state or local — is stepping in to solve it, they said.

“We want to know what happened,” said Barbara Leone, who buried family members in Cedarwood. “We all have constant grooming and then you know, suddenly everything just stopped.”

“I just find it disrespectful to see an overgrown and neglected cemetery,” said Sue Wilbur, who also has family in Cedarwood.

Leone and Wilbur were two of about 30 volunteers who gathered for a clean-up day on a Saturday morning in October, armed with rakes, leaf blowers, garbage bags and lawnmowers to scavenge for trash while mowing waist-high weeds and grass.

Like many other families, they say they are at their wit’s end and are trying to cut through the red tape to seek answers from state and local officials.

Robert Laughlin, the former President of the Board of Trustees of the Cedarwood Cemetery Company of Keyport, resigned in 2020. In an interview with NJ Advance Media this month, he said it all started when sections of a retaining wall along Florence Avenue began to deteriorate and collapse.

Problems with the wall date back to at least 2008, according to minutes from the New Jersey Cemetery Board, which regulates non-religious, private cemeteries like Cedarwood. In 2017, a notice was sent to the Board of Trustees by Hazlet Municipality’s Assistant Code Enforcer, citing a complaint the municipality had received about the wall, according to copies of the letter Dennis Fotopoulos, a former councilman, received and delivered to NJ had expanded media. Fotopoulos was another volunteer who worked up a sweat during the cleaning day.

The board of trustees said in a reply letter it received three bids to repair the 200-foot wall, with the lowest bid being $36,757. Without the funds to pay it, the board applied for a grant and was denied because, according to the letter, it had lost its charitable status for failing to file the required paperwork with the IRS.

Money set aside in a statutory trust fund could easily have paid for the wall’s repairs, Laughlin said, but state law bars them from using it. Laughlin said the board of trustees asked the community for help repairing the wall and even asked if they could contact the New Jersey Cemetery Board for assistance in releasing the funds. Instead, Hazlet threatened the board members with a fine of $3,000 a month.

Laughlin added: “The advice (of our attorney) to us was that everyone resign. Send me your resignations, done. You can’t fix this.”

Cedarwood’s maintenance and preservation fund was valued at approximately $82,000, according to records filed with the state cemetery board in 2018. In addition, Cedarwood had a trust fund from the wife of someone buried in the cemetery valued at approximately $48,000. Her will stated that, according to the New Jersey Cemetery Board meeting minutes in 2008, proceeds from her estate were to be used first for her husband’s mausoleum and then for the “care and beautification” of the cemetery.

The board treasurer and secretary asked the state if money from both funds could be used to repair the wall, the minutes of the meeting said. The state pointed out that only the bank that managed the endowment fund left by the will could authorize the use of these funds.

But the alimony fund may not be used without a court order, the country says. State laws regulating non-religious cemeteries like Cedarwood require that a certain percentage of cemetery sales be paid into the upkeep and preservation fund, and only the interest earned can be spent on upkeep. Because the cemetery no longer generates revenue from property sales or other services, no funds have been added to the account to help it grow, Laughlin said.

In the last eight to 10 years of his service on the board, Laughlin said he recalls not a single vacant lot being sold.

“Over a period of probably six years or more, we have reached out to every politician and everyone we could to get them to release the money that is in the cemetery repair and replacement account that they are not releasing want,” Laughlin said.

According to the New Jersey Cemetery Board, a cemetery is considered abandoned when it no longer has sufficient funds to operate and no governing body is in place.

NJ Advance Media sent several questions about the cemetery to Rob Bengivenga, Hazlet’s Business Administrator, but he referred the state cemetery authority instead.

“The community was aware that the cemetery trustees were trying to get the state to take responsibility for the cemetery,” Bengivenga said. “The cemetery managers were apparently successful.”

The New Jersey Cemetery Board said it could petition the court to appoint someone to manage the cemetery until a new board is established — but “this option is only viable if the cemetery is active and has sufficient income to maintain it.” and other expenses. That is not the case here.”

However, family members of property owners can volunteer to collect donations to help preserve the cemetery as much as possible.

Laughlin said it still bothers him to see the cemetery in the state it is in and that if he had the money he would fix the wall, help organize a new board of trustees and turn his finances around.

He believes millions of dollars are sitting in maintenance funds from other abandoned cemeteries whose use is blocked by state laws, but until there’s a riot, nothing will change.

“It has to be someone from the very top who says this has to change,” he said.

With no help from the state or community, maintenance falls to Kite, the families and other volunteers determined to keep the cemetery as best as possible with limited resources.

According to Leone and Wilbur, there were discussions about forming a new cemetery board, but they would face the same problems as the previous board – the wall needs repairs and there is no money for it.

“Why would anyone get up to do anything when they’re telling us there’s no money?” said Leone. “We are aware that they will not give us the money.”

Fotopoulos said the broader aspect of Cedarwood’s story is the fact that there are other cemeteries in the same state of decay that just aren’t receiving the ongoing care that was promised.

“I think the tragedy is that it’s not left to anyone except people like us who do something like this once, twice, three times a year.”

Thank you for trusting us to provide the local news you can trust. Please consider sponsoring NJ.com with a voluntary subscription