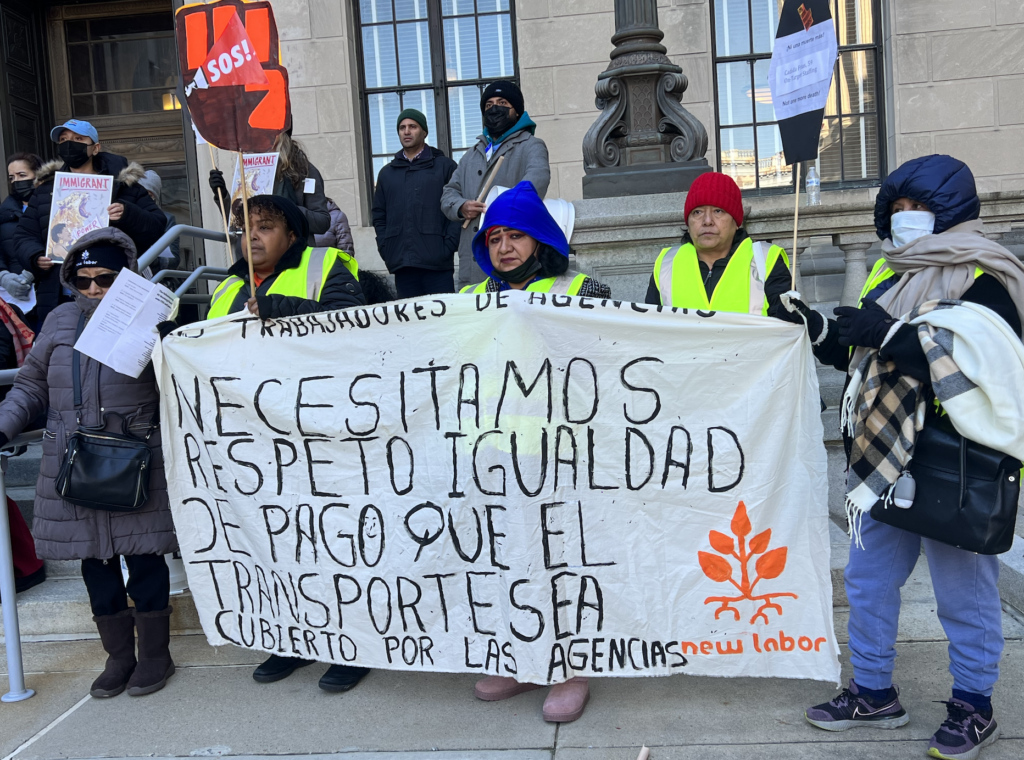 Another try at this introduce a bill that expands the rights of temporary workers failed on Monday when Senate leaders pulled the bill out of the voting session, prompting howls of protest from immigrant activists who were then thrown out of Senate chambers.

It was the second time in about a month that a vote had taken place the measure was postponed just before the expected vote. Senate President Nicholas Scutari (D-Union) told reporters there were not enough yes votes to pass the bill on Monday.

Immigrant groups campaigning for the bill’s passage — gathering outside the Statehouse ahead of the Senate voting session — have expressed dismay.

Rosa, a Newark temp who asked not to use her last name for fear of retribution, said in Spanish after being thrown out of the chambers that the Senate’s inaction “simply isn’t right.”

“It’s injustice, it’s not fair, and they can’t keep doing this to us,” she said. “We deserve protection like any other person with a job.”

Monday’s postponed vote was the latest speedup for the law, which passed both chambers in June but required a new vote due to a procedural error. It was then sent to Governor Phil Murphy, who conditionally vetoed the bill in September and sent it back to the Legislature with proposed amendments. In October, a revised version of the measure was removed from the Senate agenda after not receiving enough votes for passage, partly because some senators were ill and others said they no longer supported them.

The bill, with Murphy’s proposed changes, passed the Assembly on Oct. 3.

Scutari told reporters he expects to republish the bill during the next December 22 voting session.

Democrats have a 24-16 majority in the Senate, but the legislation requires 21 votes to move forward. It passed by 21 votes in August before Murphy vetoed it.

New Jersey is home to approximately 127,000 temporary workers, many of whom are consistently employed by the same companies as “permanent workers” but do not receive the same wages, benefits, or protections as employees.

The bill would require agency workers to receive salaries and benefits that match those of traditional workers, prevent recruiting agencies from deducting transportation fees from workers’ paychecks, and require improved record-keeping to reduce labor violations. Employment agencies would also have to give advance notice of assignments, including terms such as wage rate, hours, length of assignment, amount of sick leave, and health and safety information.

Sen. Joe Cryan, the bill’s sponsor, appeared disappointed Monday but said he remains confident the bill will make its way across the finish line.

“We’re going to fight for this law and it will eventually pass no matter how much money and these agencies are trying to stop it,” said Cryan, a Union County Democrat.

After Murphy conditionally vetoed the bill, business groups stepped up efforts to oppose it, claiming the legislation is near impossible to implement and could put some recruiting agencies out of business. They say the requirement that agency workers receive the average pay rate and cash equivalent of their permanent counterparts is an “important and costly stipulation.”

This “will severely compromise legitimate temp agencies, hurt third-party companies that use them at a time of great staffing challenges, and reduce opportunities for those seeking temporary unemployment,” said Alexis Bailey of the New Jersey Business and Industry Association.

Make the Road New Jersey, an immigrant rights and labor organization that has pushed for the bill’s passage, has blasted Senate leaders for failing to provide protections for temporary workers.

“Now is not the time to leave temp workers behind. Not passing this law just means that temp workers are available and that business interests come before our own humanity as workers,” said Reynalda Cruz, New Labor organizer and former temp worker.

Janeth Caicedo, who testified before Congress last week about her brother – a temp worker who was killed at his construction site in 2019 when a forklift crushed his skull – called the Senate’s decision to postpone the vote again “a dishonor to the many lives”. we lost,” read a statement from Make the Road.

In September, four temp workers were killed after a pickup truck overturned in Englewood Cliffs while transporting workers from their shift at a warehouse in Chester, New York.

Ahead of Monday’s Senate session, more than 20 interest groups and unions wrote a letter to Murphy and the Senate leadership urging them to move forward with the measure.