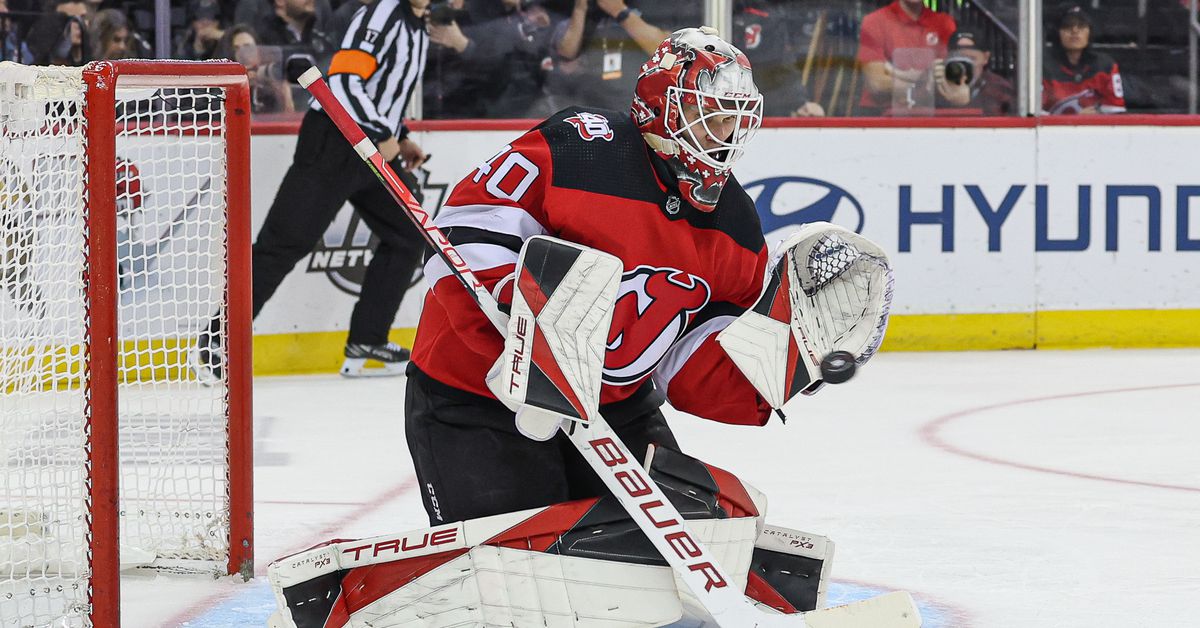 Even before the New Jersey Devils started their 2022-23 season, it was apparent that they planned to roll a goaltender combination of Mackenzie Blackwood and Vitek Vanecek. The team went off and acquired Washington’s Vanecek while bringing back Blackwood and anticipating a year of recovery. It would also mean the team could keep their two young talents, Akira Schmid and Nico Daws, at Utica. Both have been able to hone their games in the AHL without necessarily being thrown into NHL action like Daws was last season. Even when injuries did strike, it looked like the Devils had Jonathan Bernier, who was working his way back from injury; surely he would be ready in time if either Blackwood or Vanecek went under.

Okay, so maybe the hockey gods just want to keep the running gag alive, but the best plan of keeping both Schmid and Daws in Utica clearly didn’t materialize. Bernier remains unavailable to the team, while Blackwood unfortunately picked up an MCL injury against the Edmonton Oilers. While Vanecek was still available, the Devils obviously needed at least one other goalie in the roster.

I don’t think any of us expected Schmid to be anything more than a makeshift until Blackwood healed from his injury. With a recovery time of 3-6 weeks, the Devils would appear to lean on Vanecek and use Schmid in some competitions where he could post average to good stats and have a shot at winning. Pretty normal for a potential goalie called up for a backup stint.

And then Vanecek had to go against the Ottawa Senators…

So Schmid has to get cold in the middle of a tied game in the third period against the Ottawa Senators. He looked good in the third period, but then the Sens got a power play in overtime. With the expectation of disappointment to come, Schmid jumped at the opportunity and robbed Ottawa MULTIPLE times. He secured his first NHL win on that relief appearance and followed that up with his first start to a win two nights later.

Schmid has played very well for a prospect in all three of his appearances this season; He’s only played nine NHL games this season and last, but he’s seemed a lot more confident this season. His positioning and play, along with his overall save percentage (we’re ignoring the individual from that Arizona game) have inspired confidence that the Devils have a chance of winning no matter which goaltender they play with on any given night. And therein lies the problem. At the moment, the Devils have a tandem that the fans and the team are comfortable with. So what do they do when Blackwood is ready to come back?

Unless the team wants to take three goalies with them (and they could with Tyler Wotherspoon as the only healthy scratch at the moment), Schmid will be sent back to Utica once Blackwood fully recovers. In terms of roster management, waivers, and being able to buy everyone some playtime, this is the most sensible thing to do. However, the question remains whether the team would be better positioned with a Vanecek/Schmid duo than with Vanecek/Blackwood.

Anyone who’s been following this site for a while knows that I firmly believe in giving Blackwood multiple chances. Unless he bounces back from that last injury in a big way, I’m beginning to wonder if it would be best for him and the team to make this their last season together. Blackwood just always has the same problems in games, and he’s also had some bad luck with injuries. He might be best served with a fresh start elsewhere in the league, which in turn could mean a bigger role for Schmid.

Now I’m not sitting here and anointing Schmid the next coming of Martin Brodeur; He’s still very young and has played very few NHL games. But that brings us back to the subject of this piece and what do the Devils do if he keeps this high level of play? We haven’t heard that Blackwood’s return is imminent and the team can’t just play every game against Vanecek until Mackenzie is healthy. Schmid will get at least one more game, maybe as early as tonight if it’s the front end of a back-to-back. If he continues to play well, does the thought of how he can keep up with the NHL club creep in? Are the Devils trying to carry three goalies for a while to make sure everyone is sane? Are there other options being discussed?

Perhaps that leap in logic is too far for a goaltender who has only had to stop 48 pucks this season to match his current .941 percent save rate. Perhaps sending him back to the AHL for more experience and long-term success is the right step for his development. Still, the Devils won, and if the team wins and looks legit, you’ll want your best 20 players on your bench every night. I think it’s only fair to wonder if Akira Schmid, if he continues to play as well as he does, is the second goalkeeper to be in that 20?

What do you think of Schmid and his play this season? Would you like to see him in more games to get an idea of ​​what the Devils have? If he continues to play well, what do you think the team should do? Do they keep him and run three goalies with the NHL team, send him back to Utica, or explore other options? Leave any thoughts below and, as always, thanks for reading!