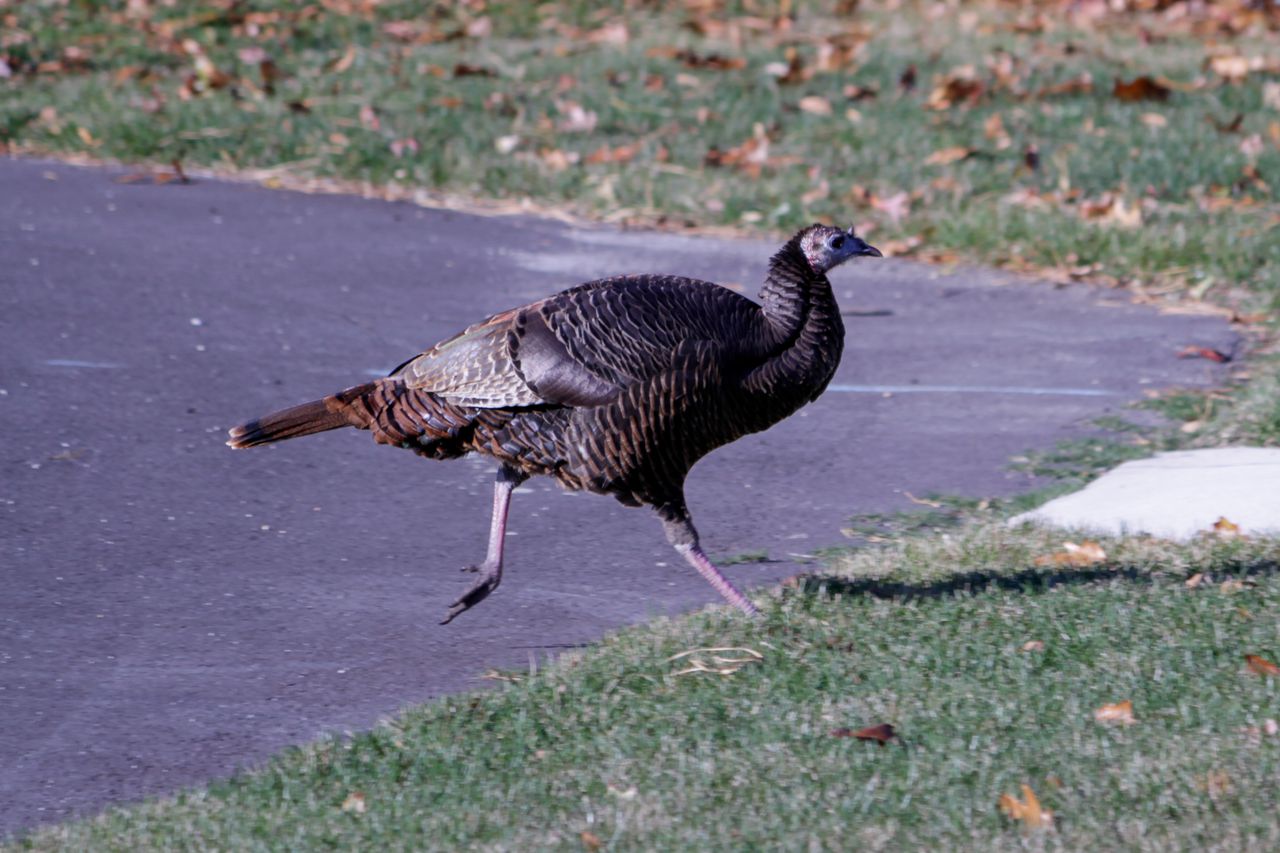 They are in the backyard. They’re up on the roof and at the front door. You stop the traffic and make a mad dash for your car.

The feathered beast making a B-line for your front bumper is the wild turkey of New Jersey, the not-so-rare bird that seems to roam the nation’s most populated state with abandon.

The bird, which to many Garden Staters looks better on a plate than scurrying across the front yard, has emerged from the wild in increasing numbers in recent years, flocking to the suburbs in its never-ending search for an easy meal.

“Turkeys are a very adaptable bird that can live in many different habitats,” said Jimmy Sloan, the upland wild bird biologist for the state Department of Environmental Protection. Wild turkeys are found in all 21 counties of New Jersey, he added.

That was not always so. The bird, which pilgrims at Plymouth Rock are said to have served on First Thanksgiving in 1621, was once abundant in the United States, but the twin forces of industrialization and urbanization over the past 400 years have destroyed much of the wild turkey’s natural habitat.

Nowhere has this habitat loss been more profound than in New Jersey, where the wild turkey had all but disappeared by 1977. That year, the state Department of Fish and Wildlife released 22 birds into the wild and embarked on a restoration project that appears to have been insanely successful.

There are an estimated 21,000 wild turkeys roaming free across the state this Thanksgiving, and flocks of the birds often pop up in places where they’re not always welcome.

Like many birds, turkeys are territorial animals that guard their territory and can be aggressive. They are large and gather in flocks, especially in winter, and are difficult to get rid of.

Wild turkeys, like black bears, are a controlled species managed by the state Department of Fish and Wildlife, which oversees the spring and fall turkey hunting season.

According to state officials, hunters took 2,428 wild turkeys in 2022, up slightly from the previous year’s total of 2,327. Sloan said the state’s wild turkey population appears to have peaked around 2006 at an estimated 23,000. The population has since declined slightly and is stable.

Still, the search for food will attract turkeys from the forests to farmers’ fields and beyond. Some have made their way to the suburbs to peck at seeded lawns and the bird feeders many people have in their backyards, Sloan said.

In 2019, wild turkeys wreaked havoc in Toms River. The situation prompted Todd Frazier, a Toms River resident who has played for the New York Mets and the Yankees at third base, among others, to tweet that Gov. Phil Murphy should do something.

“Toms River and the Toms River wildlife say they can’t move them. That’s ridiculous. You nearly harmed my family and friends, wrecked my cars, trashed my yard and more,” Frazier tweeted.

The state has removed some of the birds, but there’s still a problem at Holiday City in Toms River, according to local residents.

This fall, Sloan said the state Department of Fish and Wildlife responded to harassment complaints from Deptford in Gloucester County, Sicklerville in Camden County and the Holiday City retirement community, where wild turkeys have been rampant since 2019.

Because wild turkeys are a managed species, poaching them is illegal. Fish and wildlife officials will capture problem birds and release them back into the wild — but only if the turkey causes significant property damage, such as a bird. B. tears up the landscape or dents cars with its beaks.

“They always hang around. If they don’t do any damage, we can’t relocate them. It’s no different than a cardinal flying into your bird feeder. We wouldn’t relocate a cardinal,” Sloan said.

A Holiday City resident, Alice Agnello, said she had three close encounters with wild turkeys at the Toms River retirement home. The first happened in May when she came home from work one day and pulled into her driveway.

“I heard a strange noise as I got out of the car,” Agnello said. “I looked in the back of the car and saw this turkey. I grabbed my wallet, went into the garage and hit the ‘close’ button.”

Then, a few weeks later, she was driving her pet Chihuahua, Summer, to the vet when a large bird darted in front of her car. She hit the brakes and grabbed her phone to capture the moment on video. The same thing happened a few weeks ago while she was behind the wheel when a turkey started pecking at her car.

“I don’t know if it’s the same turkey, but these turkeys are crazy,” she said.

Agnello said she felt a little intimidated by the encounters. “It seems he either wanted me or my car,” she said. “I admit it: I am a coward. I’m not brave.”

Sloan said people had little to worry about. Turkeys see their reflection in the metal on the car door and mistake it for another male, he said.

“The males are dominant,” he says. “They think they’re seeing another male, so it’s time to fight.”

The female turkeys lay between eight and 14 eggs a year. But only about 60 percent of the eggs survive the bird’s natural predators. In the wild, the turkey’s natural enemies are the fox, the coyote, and the raccoon, Sloan said.

After the eggs hatch in spring, females lead the brood of chicks as they mature. Although wild turkeys can fly, they don’t travel very far. They typically stick to 100 to 2,000 acres, Sloan said.

“You won’t see that bird fly fifty miles,” he said.

Fannie Gray, a Montclair resident, believes the same wild turkey has been hanging around her home for almost two years. The bird comes and goes, she said.

Gray’s home on Wilde Place is just blocks from downtown Montclair and busy Bloomfield Avenue. Gray has her own theory about the bird’s range.

“I think she’s from the reservation,” says Eagle Rock Reservation, a hilltop less than a mile away.

After being gone for about four or five months, the turkey returned to her backyard last week — just in time for Thanksgiving — and made her presence known, she said.

Richard Cowen can be reached at [email protected].