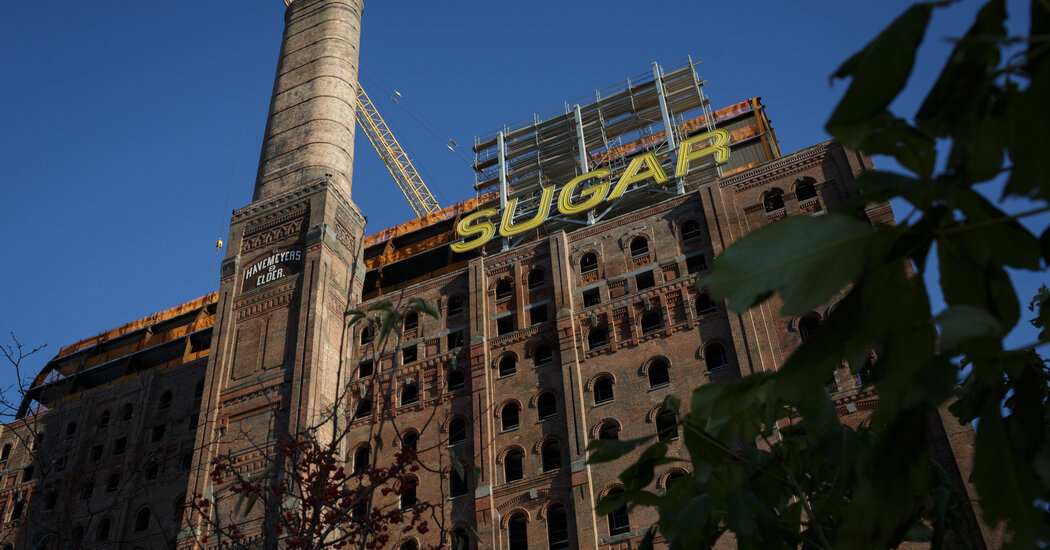 Good morning It’s Wednesday. What’s big and yellow and high above the Brooklyn waterfront? Half of a famous character. We’ll find out which half – and when the other half will come along. We’ll also see which streets will be closed around Rockefeller Center, and when, to “pedestrianize” the area for vacationers who want to “oooh” and “ahhh” the tree and nearby holiday windows.

“It feels like we’re reviving the icon,” said Brian Ingrassia. This came after the word “sugar” was written in yellow letters nine feet seven inches tall.

But the icon, a sign that has been an industrial totem along the Brooklyn waterfront for generations, is only half revived. The other half, six letters spelling “Domino,” has yet to be hoisted over “Sugar.”

Ingrassia said that would happen next week. “Sugar” will remain dark until then: He said the sign would not be switched on until “Domino” was also in position.

The two-word sign was designed to look as familiar as ever, but it’s an LED replica, not the original neon sign that was an integral part of a giant sugar refinery for more than 80 years — by some accounts the largest refinery in the world world world in its heyday. At the end of the 19th century, the refinery was producing 5,000 barrels of sugar per day. At the end of World War I, 4,500 workers were on the payroll.

The number declined after World War II as corn syrup and other sweeteners rose in popularity. Until the 1990s, only liquid sugar was refined there.

The plant closed in the early 2000s and much of the 11-acre site on which it was located was cleared to make way for new homes and offices, including two residential towers that opened before the pandemic, as well as the two acre Domino Park. The replica of the sign was placed on a building that has not been demolished, adjacent to where the original sign had long stood.

“It’s exciting to have a sign back,” said Ward Dennis, a former community board member who said he did historical studies of the refinery complex before much of it was demolished. “Anyone who walks up and down FDR Drive remembers seeing it. When you came over the Williamsburg Bridge, there was always this domino sign to welcome you home.”

The new sign will offer a higher powered welcome. Ingrassia, a project manager from Two Trees Management, the developer behind the construction of the refinery site, said the new sign is brighter and more energy efficient than the sign it replaces. The new letters’ aluminum casing made them lighter than the originals.

Once in place, the “Domino” half of the sign will rejoin other industry signs that are geographic landmarks along the East River – the Silvercup Studios and the Pepsi Cola signs in Long Island City. But Ingrassia, who grew up in Brooklyn Heights, made it clear that the domino sign had ingrained itself in Brooklyn’s consciousness in a uniquely effective way.

“I’ll say that,” he declared. “I can’t name any other brand of sugar.”

Closing streets in Midtown to make room for crowds

The message from City Hall sounded like an update to a 1980s road sign — don’t even THINK about it Drive near Rockefeller Center in Midtown Manhattan as the year-end holidays near.

The city announced plans to make much of the area “pedestrian” starting next Wednesday, Rockefeller Center Tree Light Day. Here are the details:

The goal of the changes is to ease the crowds of people struggling to see the Rockefeller Center tree and the storefronts along Fifth Avenue. Ydanis Rodriguez, the traffic commissioner, said the city is expecting its biggest crowds since the pandemic began.

Mayor Eric Adams said in a statement that Midtown’s pedestrian mall is “the kind of bold, creative thinking we need to ensure the city’s comeback is strong, equitable and inclusive.”

“And for those coming from out of town,” he added, “I only have two messages: happy holidays and spend money.”

red sky full moon
September on
the beach our backs
to the dunes we had
Seltzer and sandwiches
two girls watching
play in the surf
laugh scream
until a ranger did
she should stop him
did they make me scream
too cold shy scared
the Atlantic so many
Reasons to stay on the sand
on a bright moonlit night
At the end of summer I wish I would
joined them was ruthless
enough long enough
dive in and
scream for joy.

Glad we were able to get together here. I’m taking a few days off. Happy Thanksgiving and see you Monday again. – JB

PS Here is today’s Mini crosswords and Spelling Bee. You can find all of our puzzles here.

Melissa Guerrero, Sadiba Hasan and Ed Shanahan have contributed to New York Today. You can reach the team at [email protected]