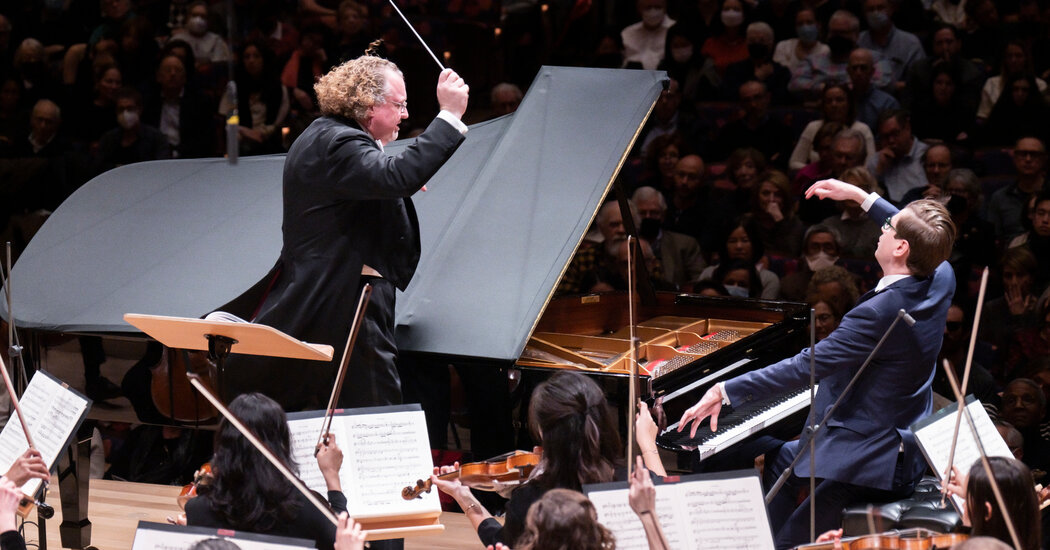 Thanksgiving came a day early this year at the New York Philharmonic: the calories, the gooey fat, the whipped cream, the fun, the feeling of endless abundance. The orchestra’s program at David Geffen Hall on Wednesday was an immersion in abundance and flashes of warming colour, and it left you feeling like a good holiday meal: a little dazed, even happily sleepy, as you headed towards the truly crowded tube stumbled.

Conducted by Stéphane Denève, Music Director of the St. Louis Symphony, the concert was très French – right down to the tender Rameau encore by pianist Víkingur Ólafsson, who made his Philharmonic debut as a soloist in Ravel’s Concerto in G. The program repeats on Friday and Saturday.)

At the heart of this concert is a sustained Adagio. But in Ólafsson’s performance, the dreaminess – the slight fuzziness, the delicacy – flowed into the two outer movements as well. Some pianists draw on the regularity of the factory machine, the bright clarity of these parts to contrast the slow movement. But as he demonstrated in a very different repertoire on his Carnegie Hall debut in February, Ólafsson resists vivid contrasts.

It’s not that his touch is diffuse; it is as clean as marble. And it’s not that the tempos he and Denève chose for the frame movements were slower than normal. But the effect Ólafsson achieved throughout, a sort of virtuoso restraint, could be described in the same words I used for his performance in February: ‘a silky sound, introverted and wistful in major and minor, in both andantes and Allegro.”

“Céléphaïs” (2017), a nine-minute segment of Guillaume Connesson’s symphonic poem inspired by the fantastic writings of HP Lovecraft, opened the concert with an extravagance that testifies to the survival of the orchestral panache of the French tradition: its garish opulence and cunning flourishes, tinny explosions and sensual strings.

Connesson’s forerunners in this tradition were heard after the break. The audience even got a second helping: the big, sweet piece of cake, Suite No. 2 from Albert Roussel’s 1930 ballet Bacchus et Ariane, was followed by another piece, Suite No. 2 from another mythological ballet in the early days 20th century, Ravel’s “Daphnis et Chloé”.

On paper, this seemed like excess; it was kind of like that, but who doesn’t like their potatoes two ways now and then? And while there is a familial resemblance between these works, Roussel’s style is slightly more edgy, with an underlying sense of logic distinct from Ravel’s undulating scene-painting.

The Philharmonic played well throughout, riding the many waves and fluctuations in intensity and pigmentation, from dewy dawns to gentle dusks. There were some particularly notable contributions to the potluck: Ryan Roberts, only a few years into his tenure as cor anglais with the orchestra but already a pillar of the ensemble, matched Ólafsson’s eloquent introspection in the Ravel Concerto’s slow movement.

The solo flutist, Robert Langevin, unwound the classically brilliant solo of his instrument in “Daphnis et Chloé” with eloquent ease. Cynthia Phelps, first viola, had a rusty tone in the roussel, and Roger Nye, unusually seated in the first bassoon chair for the work, played with honeyed composure.

Unlike most Thanksgiving dinners, the fullness didn’t feel bloated at the end. The clear, cool acoustics of the new Geffensaal counteract heavy textures; They favor an airy smoothness perfect for Denève, whose music-making exudes relaxation without losing forward momentum. A few hours later I would have been more than willing – I mean to hear – to eat some more.