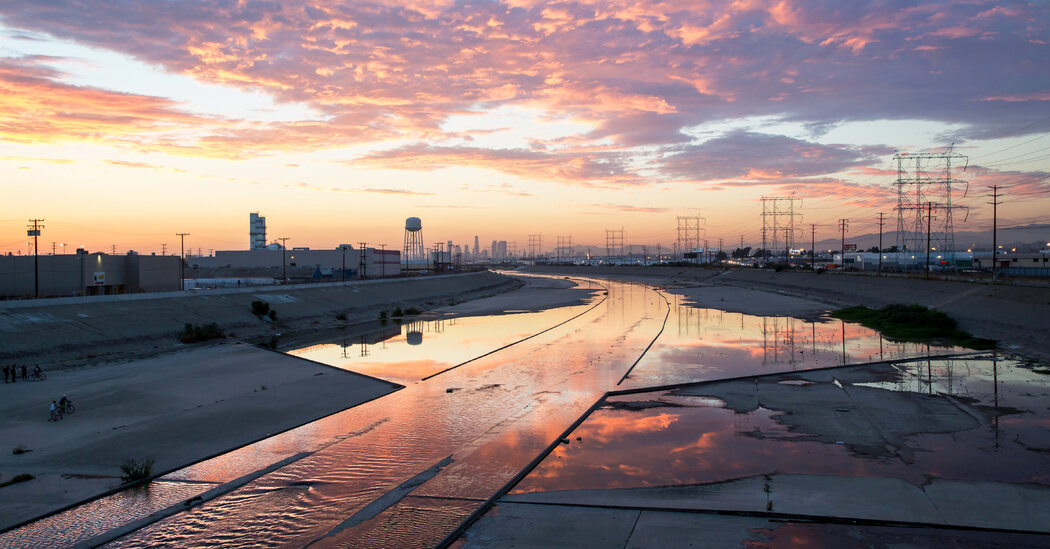 Today we begin with a brief history lesson on one of Los Angeles’ most important (and most forgotten) landmarks: the Los Angeles River.

For centuries, the river, which begins in the San Fernando Valley and ends in the ocean at Long Beach, has supported small communities of Native Americans. In the 19th century hundreds of vineyards and orange groves were tended and the export of the harvest helped spread the Southland’s reputation around the world. The city of Los Angeles eventually grew up around the river rather than along the coast, since that was the region’s source of fresh water.

But the river flooded frequently. And as Los Angeles grew, development on the banks of the river intervened, leaving less open land to accommodate the abundance. This had devastating consequences: During a heavy rainstorm in February 1938, the Los Angeles River burst its banks, eventually killing 87 people.

The US Army Corps of Engineers decided to bury the river in concrete to speed water flow and prevent flooding, a project that was completed in the 1960s. The station protected Los Angeles’ infrastructure and made the city grow into a global megalopolis, New York Times architecture critic Michael Kimmelman reported recently in Times Magazine.

“Since 1938, Los Angeles has not suffered such a catastrophic flood as this year, thanks in no small part to the engineering of the canal, which has also enabled Angelenos to forget the danger that the river originally posed,” wrote Michael, who is the Founder of Headway, a Times initiative aimed at exploring the world’s challenges through the lens of progress. “Several decades after its completion,” he added, “it is the flood channel itself – not the floods it was built to stem – that many Angelenos view as a disaster.”

In his article, Michael examines a plan to reshape the Los Angeles River, an idea with growing support as the waterway is increasingly viewed as a nuisance.

But determining exactly how to reshape the river is a tall order. There are competing demands from some environmentalists who want the concrete removed; by community activists who fear any new development would result in the displacement of poor residents; and by engineering experts who say flood risk remains too high to restore anything resembling the original flow.

Michael told me that recent conversations about the river intrigued him because they compelled guides to engage not only with issues of flood management, but also with justice, racial justice, culture, access to green spaces, and more. The debate appears to reflect a new way in which Los Angeles envisions itself, he said.

“In a city that seems to have sold itself for so long as a paradise of individual fulfillment, it presents problems that require some kind of collective thinking and action,” he told me. “The river has always been a kind of mirror of Los Angeles.”

Orzo salad with peppers and feta.

Where we are traveling

“Although I have visited San Francisco countless times, I never tire of the energy and adventure that fills this city. One of my favorite places is Golden Gate Park. The scenery is beautiful and the museums are worth a visit.

Local neighborhoods—Fillmore District, Cow Hollow, North Beach, Pacific Heights, Castro, Union Square, and more—offer a mix of great dining and fun shopping. The Presidio houses the Walt Disney Family Museum, which is filled with treasures from Walt Disney’s life. There is always more to discover. And if you are serious about walking, this is your city.”

Tell us about your favorite places in California. Email your suggestions to [email protected] We will share more in future editions of the newsletter.

Have you recently bought or rented a home in California? We want to hear from you.

The New York Times weekly real estate column, The Hunt, features ordinary people who have just moved and want to share their stories. If this is you, contact us at [email protected]

And before you go, some good news

Herrick, 52, is a writer and professor at Fresno City College and a teacher at the University of Nevada, Reno, on Lake Tahoe, reports The San Francisco Chronicle. Born in South Korea, he was adopted by a family in Modesto as an infant.

“Lee’s dedication to highlighting the diverse experiences of Californians and making them so accessible through his poetry makes him a perfect candidate for Poet Laureate,” Newsom said in a statement Friday.

Thank you for reading. I will come back tomorrow. — Soumya

Briana Scalia and Steven Moity contributed to California Today. You can reach the team at [email protected].