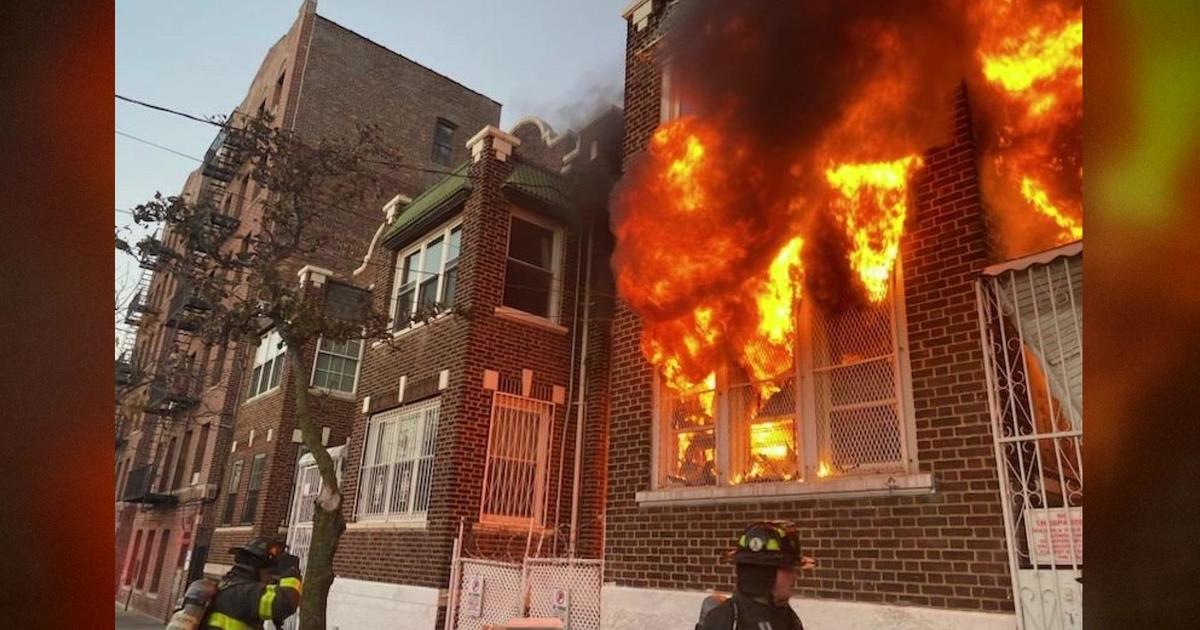 NEW YORK – Thanksgiving Eve took a drastic turn for a family in the Bronx when they went from preparing Thursday lunch to jumping out of their burning building.

Six people, including four firefighters, were injured in Wednesday’s fire.

A fire ravaged the first floor of a duplex on Manida Street off Lafayette Avenue in Hunts Point.

Smith runs a recreation center across the street. There he grabbed a fire extinguisher and ran over.

“Go to the front door, a man came out with the two children in the smoke, so I threw on the shirt, went in and tried to put out the fire. Smoke pushed me back. At that point we had people upstairs,” he says.

An 8-year-old girl trapped on the second floor stood by the window, paralyzed with fear.

“The flames came out of the windows. I mean, it was really, really intense,” said neighbor Mitzi Gonzalez.

The bodega owner down the block sprinted over with his son.

“I see the little girl sticking out of the window. I said you have to jump, we can’t wait for the fire department, we have to get them,” said Gilbert Valle.

Valle stood below and called for the child.

Then the girl’s 16-year-old sister came to the window, followed by her mother. Valle caught all three.

“I went to them and hugged them. ,Are you doing good? Is anyone else in the house?’ They were happy, they hugged me. I said I love you, they said they love me. We don’t know each other, but I love her,” Valle said.

Firefighters arrived quickly and put out the flames. Both the upper and lower dwellings are charred.

But what the victims have left is their lives, and tonight everyone in this neighborhood is thankful for one another.

“Thanksgiving Eve, this happened, it was a blessing to have so many people out here to help,” Smith said. “That’s what we do, New Yorkers. When it’s time to go, we’re here.”

The local fire chief told us it was unusual to have such a large and fast fire in the middle of the day. Officials are now investigating the cause.

Ali Bauman joined CBS2 News in 2016 as a general assignment reporter. Ali is a proud millennial who uses social media storytelling to bring news to a new generation of viewers.