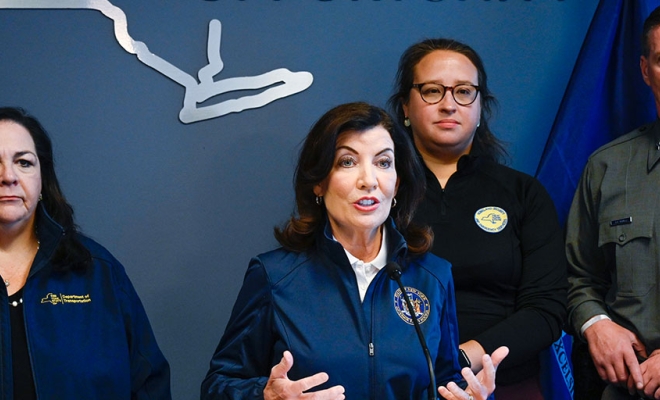 The governor has submitted a request to President Biden for a federal emergency declaration for the counties of Cattaraugus, Chautauqua, Erie, Genesee, Jefferson, Lewis, Niagara, Oneida, Oswego, St. Lawrence and Wyoming. If approved, the emergency declaration will grant affected counties access to federal funds to support ongoing response and rescue efforts.

Department of Homeland Security and Emergency Services
The New York State Division of Homeland Security and Emergency Services is closely monitoring weather and travel conditions, coordinating state agency response efforts, and communicating with local governments throughout the event. The state Office of Emergency Management began interagency coordination calls with the National Weather Service Wednesday to prepare for the storm’s impact on regions across the state.

The state’s emergency operations center in Albany was activated Thursday, as well as a regional operations center in Cheektowaga, Erie County, where DHSES is coordinating field operations with state agency partners such as NYSDOT, the state police and the Thruway Authority. In addition, OEM employees are integrated at the Erie County Emergency Operations Center and the command centers of the cities of Hamburg, Orchard Park and Evans to help coordinate state and local responses. State stocks are ready to provide resources for local governments to meet any storm-related needs.

In western New York, Route 219 from I-90 to Peters Road is currently closed. Working with state and local officials, the department is monitoring conditions and will update the public when those roads reopen.

The State Department of Transportation responded with 3,287 supervisors and operators. Personnel can be configured into any type of response crew required, including snow and ice operations, dewatering, chipper, loading and hauling, and cutting and throwing. In addition, 75 employees of the operations control system are available to support the event.

In addition to existing resources, DOT brings contractor resources to Western NY from Finger Lakes, Central NY and Western NY. This includes 64 loaders, more than 130 large dump trucks, a skid steer loader and about 200 other employees.

All residence locations will remain manned 24 hours a day for the entire duration of the event and for priority cleaning. All available snow and ice tools are ready for use. Fleet mechanics in affected areas will be manning all main locations 24/7 to perform repairs and keep trucks on the road.

The commercial vehicle ban remains in place on Route 219 from Route 39 to I-90 – the road remains closed. On I-81 from exit 33 to the Canadian border, trucks will continue to use the right lane only.

DOT has lifted its total commercial vehicle ban in the following locations:

The freeway has reopened to all traffic and there are currently no commercial vehicle restrictions in place with the following exceptions: The freeway (I-90) exit 55 (Lackawanna) remains closed to all traffic to support the closure of Route 219. In addition, exit 56 (Blasdell) and exit 57 (Hamburg) will remain closed to commercial traffic to facilitate cleanup efforts in these areas.

Variable message signs and social media are used to alert motorists to wintry weather conditions on the freeway. The Thruway Authority also encourages motorists to download their mobile app, which is available free for iPhone and Android devices. The app gives drivers direct access to real-time traffic information, live traffic cameras and navigation aids on the go. Drivers can also sign up for TRANSalert emails, which provide the latest traffic conditions along the freeway. You can follow the Thruway Authority on Twitter: @ThruwayTraffic and @NYSTthruway and on Facebook at NYS Thruway Authority.

At the direction of Gov. Hochul, the New York National Guard has 109 soldiers and airmen on duty Sunday to support the state’s response to the blizzard. Another 75 soldiers and airmen with pioneer vehicles for snow clearing will be used today, November 20th. Other deployed equipment includes four front-end loaders and eight 10-ton dump trucks from the 204th Engineer Battalion and the 152nd Brigade Engineer Battalion; Additional Humvees and personnel from the 102nd Military Police Battalion based in Auburn and the 174th Attack Squadron based in Syracuse will also provide general purpose and debris clearance.

On Saturday, National Guard troops assisted the New York State Thruway Authority in clearing a portion of the expressway, clearing roads in the city of Hamburg and transporting people to doctor’s appointments. Other troops deployed for the mission are from the 2nd Squadron, 101st Cavalry Regiment, 107th Attack Wing and 105th Military Police Company. National Guard personnel use Niagara Falls Air Reserve Station as a base to support the Blizzard mission.

The state police have deployed additional patrols in the areas most affected by the lake-effect snow and deployed additional specialized vehicles, including ATVs, utility vehicles and snowmobiles, to those regions. All four-wheel drive vehicles are deployed, and the force’s emergency power and communications equipment has been tested.

New York utilities have approximately 5,780 employees nationwide dedicated to damage assessment, response, repair and recovery. This includes an additional 280 external FTEs secured by National Grid. NYSEG has an additional 224 line contractor workers and 99 log contractor workers to respond if necessary. DPS staff will monitor the work of the utilities throughout the event, ensuring that the utilities are shifting appropriate staff to the regions that are having the greatest impact.