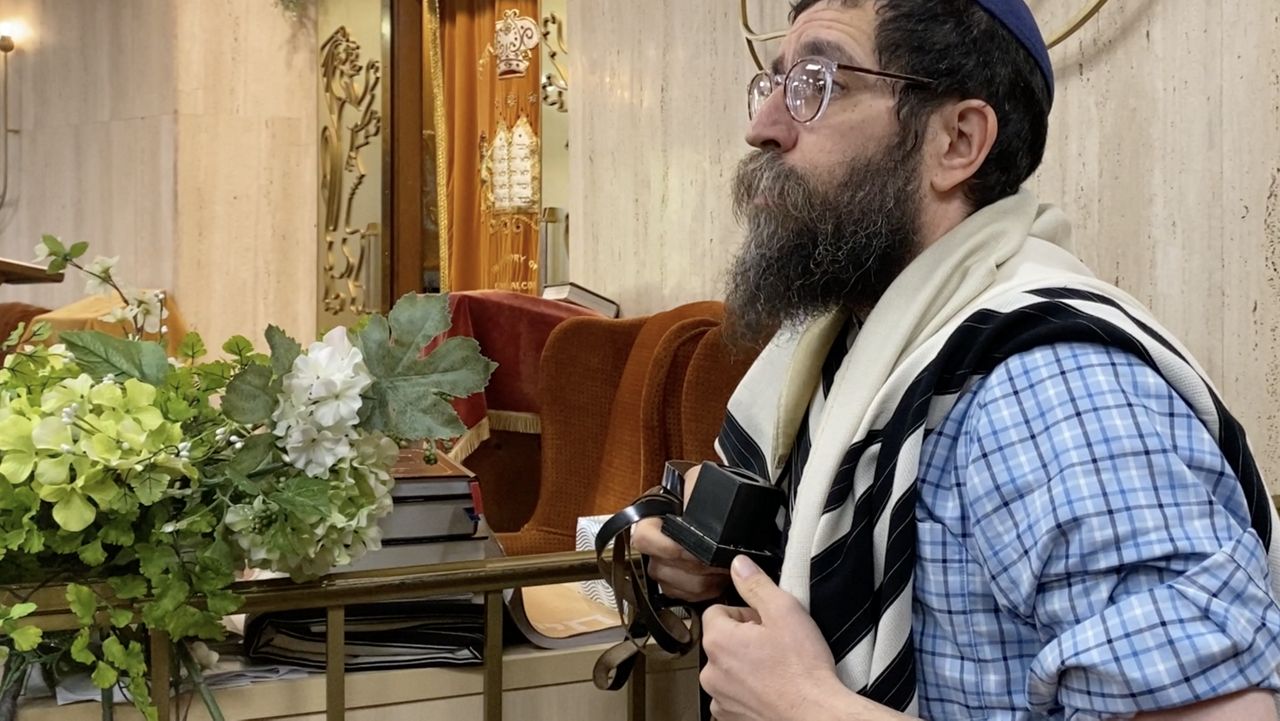 “As always, we start with the power of the zedaka. By giving zedakah we make all miracles happen, and by saying prayer we make miracles happen. So let’s move from zedakah to prayer,” he told an audience through a phone screen.

Although in-person guests are welcome to join the daily prayer, Facebook live is his preferred platform when it comes to reaching a larger audience. It began when in-person worship was suspended during the COVID-19 pandemic and was met with such praise that he decided to keep it going to include followers around the world who practice Judaism.

what you need to know

While they practice their religion within the walls of the Chabad of Ulster County, the community is safe. But outside it’s a different story. There is another constant in his life: anti-Semitism.

His community is regularly confronted with hatred because of their religion.

“Unfortunately, it’s not just going away, it’s an ongoing problem. Part of that answer is education,” said Hecht.

According to the Pew Research Center, the Jewish community is 14 million people, only 0.2% of the world’s population, but is still one of the most targeted populations in the world.

The Anti-Defamation League says there were over 2,700 anti-Semitic incidents in the United States in 2021, the highest number since ADL began keeping records in 1979, and it doesn’t seem to be slowing down.

Incidents in New York account for 15% of all reported antisemitic incidents nationwide. The recent spike in incidents comes as extremist groups have a wider audience online. In recent weeks, pop culture figures including Ye, formerly known as Kanye West, and NBA player Kyrie Irving have come under fire for anti-Semitic posts.

On November 21, Gov. Kathy Hochul signed legislation to combat anti-Semitic hate crimes. The first measure requires those convicted of hate crimes to complete mandatory hate crime prevention and investigation training as part of their sentence. The latter is a campaign that the governor’s office says focuses on “acceptance, inclusion, tolerance and understanding of diversity” and is being developed and implemented by the state’s Department of Human Rights.

“Our hearts are broken after a weekend in which LGBTQ Americans were massacred and Jewish New Yorkers fell victim to horrific acts of hateful violence,” Hochul said. “New York belongs to the good, not to those with hate at heart – we are taking bold action to take back our city and state from the haters, bigots and white supremacists. Domestic violent extremism is the number one threat to our homeland security, and that’s why we remain focused on fighting hate and keeping New Yorkers safe.”

Hecht said the public should be aware of the weight their words carry and that the Jewish community has a different approach to dealing with hate crimes than other minority groups.

“When it comes to anti-Semitism and Jew-hatred, it’s important to address it, but sometimes addressing it publicly only makes the problem worse,” says Hecht.

He said the Jewish community prefers to work under the radar. It prevents more attention being drawn to hatred towards them and small gestures leading to systemic changes.

“Don’t underestimate the power of the good you do. A small candle can add a lot to a dark room. Imagine lots of candles, it brings so much more light. As humans, when we connect with other humans, our good behavior diminishes with them. Hopefully their good behavior with us will wear off and we will continue to move in a positive direction until we build a world that is divine and sacred and kind and beautiful,” Hecht said.