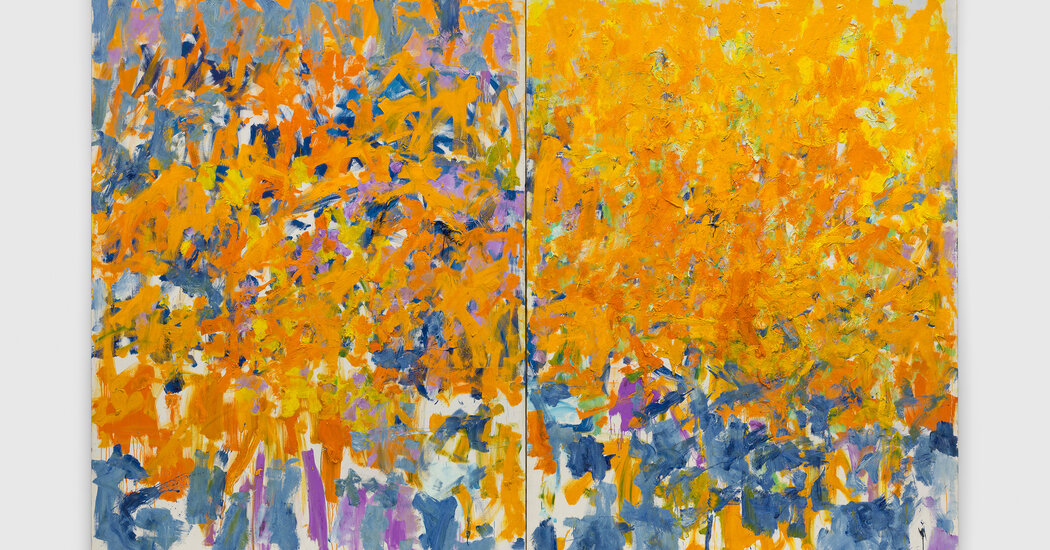 Painter Joan Mitchell, who died in 1992 at the age of 67, saved the best for last. In this respect she was very much like Philip Guston, who in the last 13 years of his life abandoned abstract expressionism in favor of a lush but austere figurative style. In contrast, Mitchell stuck with Abstract Expressionism, but never stopped. She started young when she was ambitious but hardly good. Her four-decade career has been characterized by a fairly steady forward movement, during which she brought to Abstract Expressionism a lyricism, simplicity, and lightness not entirely natural to him.

The exuberant selection of late works at David Zwirner’s in Manhattan traces a brief span of this development. The size of the 19 canvases from 1979 to 1985 ranges from large (four panels across) to small – suitable for most living room walls. Almost all are united in color, with blue, green, yellow and orange dominating most of the works. And occasionally pink, as in the opening salvo of 1981’s ‘Chez Ma Soeur’ (‘My Sister’s House’), a painting in four panels, with the two middle ones aglow with light from yellow to pink.

In some respects, Mitchell may owe France more artistically than New York. Born in Chicago in 1925, she spent a year in Paris on a travel grant after graduating from the School of the Art Institute of Chicago in 1947. She returned to the United States and settled in New York in 1949. There she became more involved in abstraction and quickly gained a foothold in the art world of downtown New York. She moved permanently to France in 1959, spending a decade in Paris before relocating to the French countryside like many of the artists she most admired, including van Gogh, Matisse, Cezanne and Monet. She bought two acres with a small house in Vétheuil, high above a valley where she could see the Seine beyond fields and woods. Just below was a small shed and a piece of land that had once belonged to Monet.

These works show Mitchell gradually adopting a less-is-more approach, and with increasing confidence pursuing a simpler, more direct style of painting, often with a broad brush and little post-processing. This brought bigger, more flowing rhythms to their compositions and a more tangible sense of their physical presence.

In Wood, Wind, No Tuba (1979), separate vertical strokes of lavender and blue help delineate the top and bottom edges of half of the two-part painting, forming picket fences that contain the tumult of orange.

Mitchell also became more sensitive to the particular brilliant whiteness of bare chalked canvas. In her earlier paintings, she tried to remove color by painting over it with white, which never looked good. Now she endeavored to preserve some bare canvas. At the edges of the picture, it can form a sort of random frame of white clarifying color. Or shimmer through painted surfaces so that they appear permeable, like canvases.

Such shimmers appear on the other two large canvases in the exhibition. In “Before, Again I” (1985), a coiled chunk of orange struggles with a larger mound of blue and white in a composition reminiscent of St George and the Dragon. In Then, Last Time IV, also 1985, white encroaches from the edges, where another peak of blue-white seems to erupt in bluntly flat, broad strokes into a calligraphic explosion of pure, unblended forest green. The dull flatness of the green is reflected in three very small untitled paintings from 1984. Here, quick, solid dashes of blue, sometimes associated with small amounts of other colors, look so improvised you almost expect the paint to be wet. In it, Mitchell appears to be preparing for the next phase of her art.