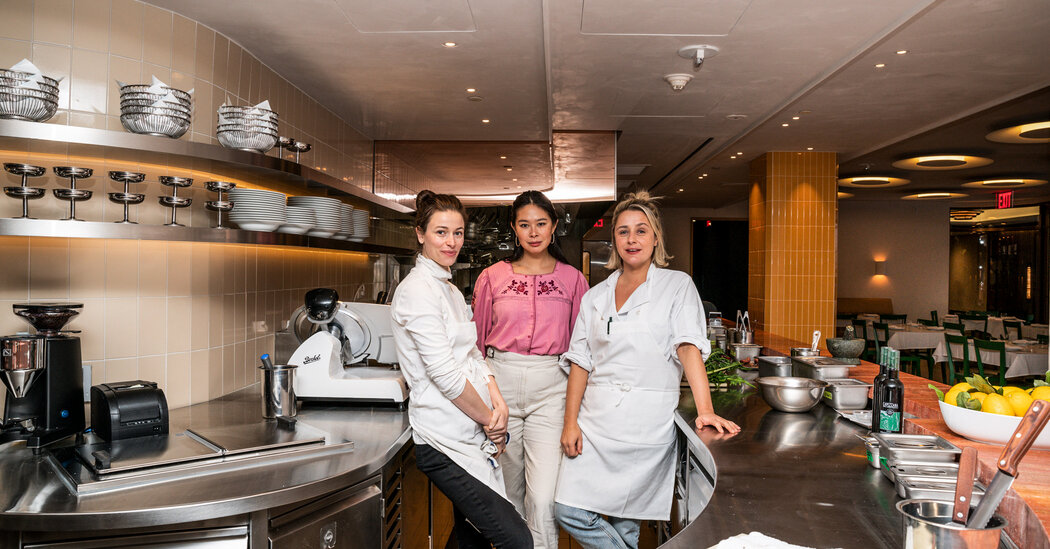 As Clare de Boer, an owner of King in the West Village, put it, Jupiter is another way of saying king. And at this new Rockefeller Center restaurant, the name presides over an expanded realm. The seating extends across the U-shaped space into the waiting area. Even the kitchen itself gives more work to Ms. de Boer and her partners Jess Shadbolt and Annie Shi, as well as chef Gaz Herbert. “With our limited kitchen at King, we could only serve one pasta a day,” Ms. de Boer said. The opening menu at the Jupiter lists eight, with snacks like fried zucchini; antipasti, including crab toast; and a meat and fish main course, all with views of much of Italy, particularly Venice. The seafood risotto comes as a broth, all’onda. Ms. Shi’s wine list is Italian, exclusively by the glass. Tablecloths are on display at Jupiter as well as at King. Luminaries, vaguely suggesting eclipses, shine everywhere. The marble bar flows into an open kitchen that divides the space. The restaurant is open from 11:30 a.m. to 11:00 p.m., for the time being only on weekdays.

A portion of Vanderbilt Hall in Grand Central Terminal, which formerly housed the Great Northern Food Hall, is now an eclectic branch of City Winery. Some bars and cafes serve wines on tap — refill your City Winery bottles after sanitizing containers — as well as breakfast, lunch and dinner menus of cheese boards, burgers, fried chicken and flatbread. Grab and go food will be available in an area called City Jams. To the side, with its own entrance, is Cornelius, a wood-paneled enclave with Windsor-style seating for a farm-to-table menu. And yes, they will be making wine in Grand Central.

Shaun Hergatt, an Australian chef with a number of Michelin-starred restaurants including Vestry in SoHo, is the chef in the dining rooms for residents of 432 Park Avenue, among other projects. Now he’s opening his own restaurant in Brooklyn. It will be adjacent to a lavish new spa, the World Spa in Midwood, and will be open to the public, not just members and those purchasing treatments. A seasonal menu that’s somewhat, but not exclusively, Italian features dishes like veal carpaccio with fresh tuna, gnocchi with squid ink, lobster with saffron risotto, and lamb with mashed potatoes. Mr. Hergatt has a wood burning grill in the kitchen.