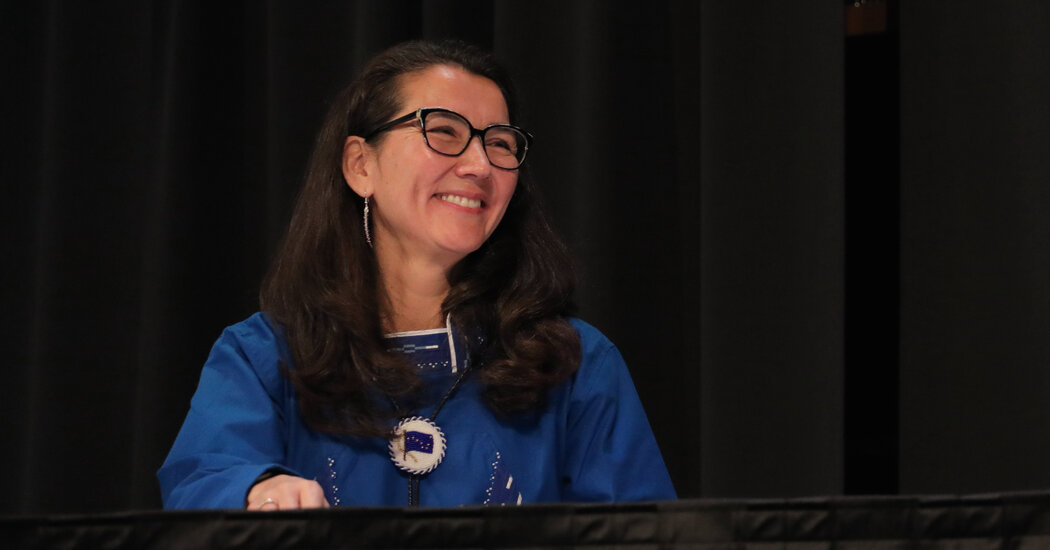 Rep. Mary Peltola, an Alaskan Democrat and the first Alaskan-born woman to serve in Congress, won a full term in the House of Representatives on Wednesday, according to The Associated Press, holding off three conservative challengers.

Ms. Peltola first won the seat in a special election in August to end the term of Congressman Don Young, a Republican who died in March. Her win, which turned the seat over for the Democrats for the first time in 50 years, was seen as an uproar against Sarah Palin, the former governor and vice presidential nominee.

With her recent success, Ms. Peltola has secured a full two-year term as sole representative for the state of Alaska. The loss for Republicans in the state ensures they will hold 220 seats in the House — a razor-thin margin with just two races left — when leaders had hoped to fill that majority with as many additional seats as possible.

“WE DID IT”, Ms. Peltola cheered on social mediapost a video of a dancing crab.

With 136,893 votes after two rounds of the standings, Ms. Peltola secured 54.9 percent of the vote, the Alaska Division of Elections said. Ms. Peltola defeated two of her Republican special election rivals — Ms. Palin and Nick Begich III, who is part of a prominent liberal Alaskan political family — as well as Chris Bye, a libertarian.

State law allows mail-in ballots to be counted up to 15 days after Election Day if they are postmarked by then and mailed from outside the United States. Election officials decided to wait until all the ballots were counted before tabulating the ranked elections.

Since neither candidate appeared to have received more than 50 percent of the vote by Nov. 23 — 15 days after Election Day — Alaska election officials tabulated the next round of voting once all the ballots were tallied.

With the establishment of an open primary system before Mr. Young’s death, in which the top four candidates could advance regardless of party, four dozen candidates jumped into the running to replace him. Ms Peltola secured a seat in the general election along with Ms Palin and Mr Begich.

While Ms. Palin and Mr. Begich split the conservative vote, Ms. Peltola assembled a coalition of Democrats, centrists and Alaska Natives behind her pro-family, pro-fish platform. A Democrat had not held the seat for half a century since Mr. Young replaced Mr. Begich’s grandfather, a Democrat.

“Our nation faces a number of challenges in the coming years, and our representatives will need wisdom and judgment as they work to put America on a more sound path,” Mr. Begich said in a statement supporting Ms. Peltola congratulated her victory. While the majority of his supporters voted for Ms Palin, 7,460 of them ranked Ms Peltola and helped her cross the majority threshold.

Ms Peltola sought to highlight her cross-party credentials and was often open about her friendship with Ms Palin during the campaign. With just a few seats determining which party controls the House of Representatives, it could potentially play a pivotal role should Republicans attempt to win over Democrat votes for must-pass legislation and any efforts to authorize bipartisan measures.

While Ms. Peltola did not take office until September, just before the midterm elections, she quickly took over pushing legislation introduced by Mr. Young and hired several Republican associates on his staff.

Ms. Peltola has also joined forces with her state’s two Republican senators, Lisa Murkowski and Dan Sullivan, to pressure the Biden administration to reconsider a key drilling project in Alaska and ensure the state gets more after the remnants of a damaged typhoon State support is granted to some municipalities.

She received an emotional and warm welcome at the Alaska Federation of Natives Convention last month, where attendees waved cut-outs of her face in support of her candidacy. Mr. Young’s family was also supportive and they did an ad for her, giving her one of his signature bolo ties as a gift.