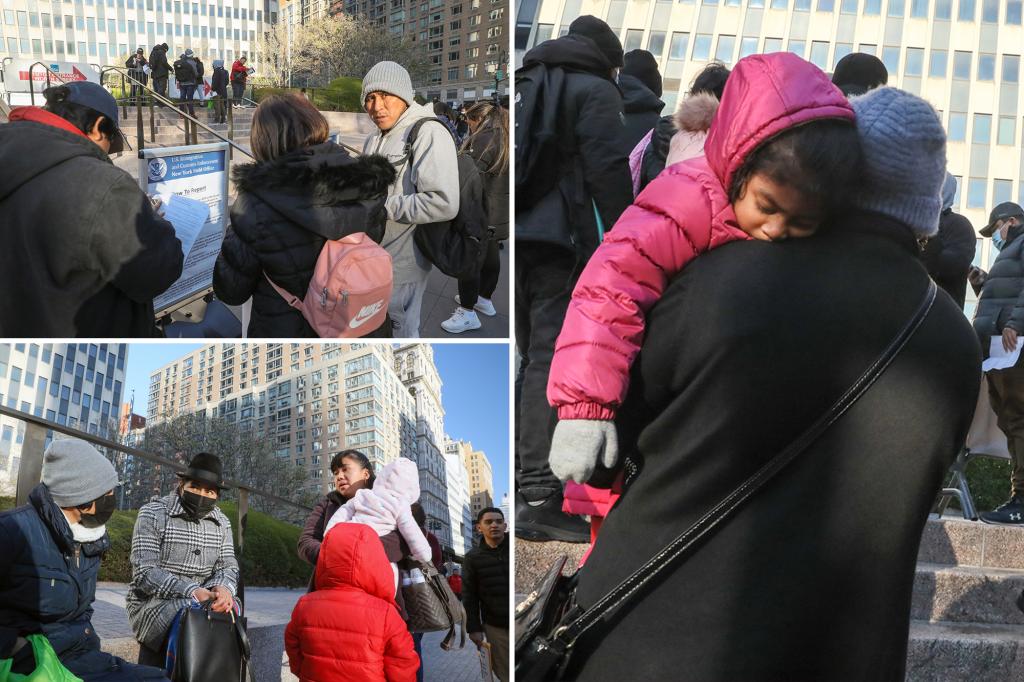 Hundreds of migrants have camped overnight in near-freezing temperatures in a desperate attempt to get a foothold inside ICE’s New York City headquarters – while the backward immigration system once again struggles to cope with the influx of asylum seekers that has since arrived in the US is pouring President Biden into office.

A growing number of frustrated asylum seekers, including some with babies and young children in tow, told the Post they braved 34-degree nighttime temperatures in lower Manhattan on Tuesday and Wednesday, only to find their scheduled processing dates weren’t being met.

“That’s how it works. It’s not good,” Ecuadorian migrant Stephanie R. told the Post on Wednesday about the arbitrary system.

The capricious procedures are just the latest sign of the Big Apple struggling to accommodate the tens of thousands of migrants who have flooded the city in recent months as the Biden administration grapples with its ongoing border crisis.

In recent days, a makeshift mini-tent city has formed outside of 26 Federal Plaza – home of US Immigration and Customs Enforcement – as desperate migrants say their appointments are being ignored and people are instead arriving on a first-come, first-served basis ” to be served .

Cardboard boxes, backpacks and blankets were strewn across the concrete in the early hours of Wednesday, according to video captured by Spectrum News NY1, which first reported the fighting.

When the sun came up, Stephanie and her family – including her 5-year-old daughter Evelyn and her 23-year-old cousin – had already waited 25 hours in vain.

The family told the Post they arrived at 6:30am on Tuesday for their scheduled 9am appointment – but they were still, shockingly, turned away.

“The newspaper says the appointment is yesterday at 9 a.m., but people from here ask, ‘When is your appointment?’ I say 9 o’clock. He says, “You missed it! Come back tonight! You’ll have to wait online to get another appointment tonight,” Stephanie said through a translator.

As they stood in front of the ICE headquarters day and night, Stephanie’s daughter got a nasty cough from the cool temperatures.

“Too cold, I get up and shiver. It was so cold my hands hurt until I couldn’t feel anything. It hurt so much to hold her,” Stephanie said.

“A man came and took the two girls into his car to sleep because they were too cold. Thank God.” She (Evelyn) is sick now,” the mother said as her miserable daughter coughed beside her.

“This is the first time we’ve felt that temperature. We come from a tropical country. It wasn’t the coldest last night. It was the coldest at 4:00 this morning. I thought, ‘Wow! Will we make it?’ I didn’t even know if it would be that cold.”

Then, after waiting all night, the family was told they would be missing their appointment for the second day in a row.

Instead, an immigration officer showed Stephanie how to reschedule an appointment on the smartphone ICE issued her at the Mexico border — a process that could have been done from anywhere Tuesday morning.

“We crossed the border from my country a month ago and they gave us these papers and this phone with a GPS in it to say where we are and they tell us this office here is where we are going that day have to come around this time,” she said.

By midday, the line – which had swelled to about 175 people by 4am, according to NY1 – ​​had dispersed after officials urged migrants whose appointments could not be honored on Wednesday to try again after the bank holiday weekend.

Migrants, who continued to barge into ICE headquarters with paperwork in hand, hoping officers would make an exception to take them in, were bluntly told otherwise.

“We’re closed, we’re closed,” a security guard at the door barked in English at several asylum seekers, although non-migrants doing business at the immigration center and carrying passports from Ireland and Japan were allowed into the building without further ado .

A man who was denied entry to the building on Wednesday afternoon said it was the seventh time he had attempted to attend his editing appointment, underscoring the long-standing extent of the problem as cold weather settled in the area.

Marlo Lopez, 35, was one of the last people to trickle out of Federal Plaza around 1 p.m. with a Manila envelope

“Yes I could be visited today, I arrived at 2am and they were taking people in until about 5am,” he said.

“The line almost wrapped around the building, I got in when it was across the street,” pointing to the corner of Lafayette and Duane Streets.

“There was still a huge line when I went in, I’m not sure how many they let in after me, but there were at least 50 people left, it was freezing cold but you have to be really wrapped up,” he said he , adding that people with children had waited more than 12 hours.

A family of four – a mother, a father, a little boy and a little girl – showed up for their appointment at 2:15 p.m. and were turned away and told to come back on Monday.

Security guards also prevented The Post from entering 26 Federal Plaza and inquiring in person about the shoddy system.

In a statement to The Post, ICE said it was working to “fix current processing delays at some ICE offices,” which sources said have been made worse by the COVID-19 pandemic.

“Non-citizens should check the ICE check-in criteria and, if possible, make an appointment with the ICE scheduler,” the agency said.

ICE said migrants who waited in line all night to make their appointments would not be penalized if they missed them when scanning a quick response code with a smartphone.

“Non-citizens would not be counted as not showing up for their appointments if they used the QR code. – ICE would reschedule them,” officials said.

The agency’s advice was unhelpful to the nearly two hundred migrants who waited overnight on an unfamiliar number to process appointments.

People online told NY1 they are taking the extreme measures because ICE is only letting in the number of people the agency can see that day, on a first-come, first-served basis, regardless of who has appointments .

“It’s quite cold, even my foot is going to sleep, not even I can’t move my whole hand,” Edi Kiste told NY1 in Spanish at 2:30 a.m. as she held her 2-year-old daughter on Lafayette Street

“I packed them with three pants, a jacket and two polo shirts inside,” she reportedly said, adding that they were still cold.

“There is hypothermia,” Laura Godoi is said to have said about the weather. Godoi had been waiting outside since 7 p.m., 13 hours before her appointment.

Another woman was reportedly seen breastfeeding her baby in near-freezing temperatures while she waited.

The situation came as New York City and other refugee cities saw an influx of migrants by the thousands, some from the southern border from the Biden administration and many others from Texas officials including Gov. Greg Abbott and the mayor of El Paso.

More than 2.4 million migrants arrived in the US in the fiscal year ended September; a record high for the year.

However, there were signs the crisis was about to deepen after a federal judge struck down a Trump-era border policy that allowed law enforcement to swiftly deport migrants who entered the country illegally last week.

Almost 18,700 migrants are currently being cared for in 57 emergency shelters and 3 humanitarian emergency and relief centers, according to City Hall.

Mayor Eric Adams declared a state of emergency during the crisis and is asking for $1 billion in aid from Albany and Washington, DC to offset the city’s humanitarian efforts.

“There needs to be a more efficient and humane way for ICE to schedule and process people for check-ins and other appearances,” a spokesman for the powerful lawmaker reportedly said.

“We are in contact with ICE and advocacy groups to push for rapid improvements.”