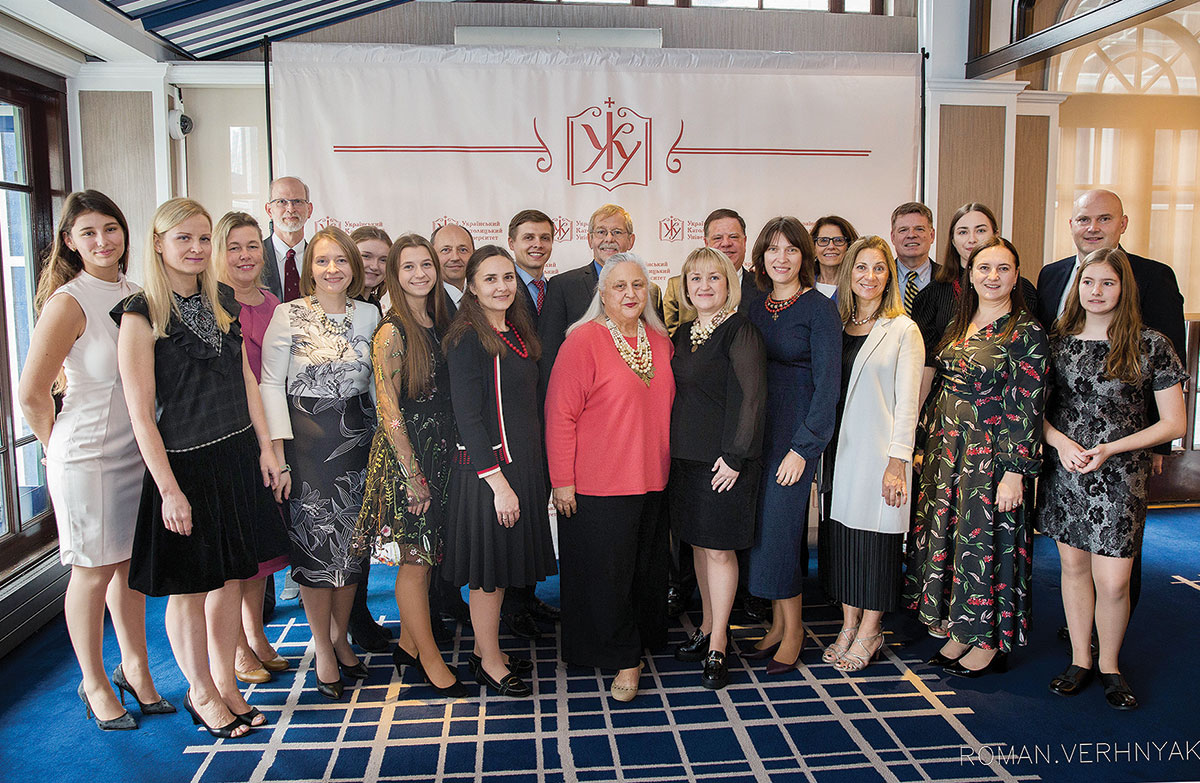 NEW YORK CITY – On a beautiful fall day in Manhattan, nearly 240 guests gathered to attend the 19th annual benefit luncheon in support of the Ukrainian Catholic University at the Yale Club on November 6. The event raised more than $350,000, which benefited the university. A special focus this year was funding scholarships for students at the school.

The event, organized by volunteers from the UCU’s New York Friends Committee, began with an opening prayer led by Cardinal Timothy Dolan, Archbishop of New York.

After the event began, Cardinal Dolan shared his memories of visiting the UCU campus in early May.

“Thank you, thank you to the Ukrainian Catholic University for facilitating and supporting and promoting this – that’s what it’s about… and that’s why people are so strong… because of the virtue of the values ​​that inspire this great university,” the cardinal said.

The renowned Ukrainian historian also pointed out that civil society organizations have played a particularly important role in post-Soviet Ukraine, proving to be a source of great strength for Ukraine in times of war.

“The Ukraine we see today – the Ukraine resisting this horrific genocidal invasion is a civil society Ukraine. And to me, one of the finest examples of civil society in Ukraine is what we are all here to support – the Ukrainian Catholic University,” said Mr. Snyder.

The Yale professor offered many in-depth insights into Russia’s genocidal campaign and the heroic response of the Ukrainian people, and UCU students in particular. He reflected on the guiding principles on which the UCU was founded.

“There’s the idea of ​​the person, the personality, which I think is essential to UCU, to the types of Catholic ethical teachings that are associated with UCU, and the idea that a person has an innate dignity,” Herr said snyder “That a person is not just part of the greater forces — that we are not just in this physical universe … but actually there is some kind of dignity within us, which means that … we can assert freedom and take responsibility.”

Mr. Snyder singled out the Ukrainian Catholic University as a prime example of that leadership and strength. He stressed his support for UCU, citing several times the role UCU and its graduates continue to play in shaping Ukraine as a nation, and urged guests to support the university.

Among the group of visionaries who founded UCU is Prof. Jeffrey Wills, who gave an in-depth presentation of UCU students’ and faculty’s commitment to alleviating the pain and destruction caused by Russia’s aggression in Ukraine became. Members of the UCU community, men and women, have joined the Armed Forces of Ukraine and gone to the front lines to fight.

The university has provided shelter to families fleeing the invasion zones, continues to organize food aid and medical aid, manage the shipment of electronic equipment, while continuing to teach.

In his remarks, Ambassador William B. Taylor emphasized the important role played by the UCU in building civil society in Ukraine.

Mr. Taylor, who served as US Ambassador to Ukraine, assured the audience that strong US bipartisan support for Ukraine will continue.

“I absolutely believe in it,” Mr. Taylor said, “because the vast majority of the American people have seen the bravery, courage and success of the Ukrainian armed forces. Of course, Western military and humanitarian aid and weapons have been extremely helpful. But the real reason why Ukraine wins on the battlefield lies in Ukrainian courage and bravery. We see that courage and bravery in UCU’s graduates and faculty.”

Archbishop Gudziak, Metropolitan of the Ukrainian Catholic Church in the United States, is also one of the founders of UCU and the current President of the University. As the final speaker, he shared his inspirational message, focusing on an essential aspect of the school’s mission, which he referred to as the Two M’s: to serve the martyred and marginalized.

The Archbishop spoke of UCU’s integration of individuals with intellectual and physical challenges into the heart of university life. Archbishop Gudziak also thanked the cross-generational donors and friends of the university as well as the many guests who were present for the first time.

During his speech, Archbishop Gudziak turned his attention to veteran Roman Horodynskyi, who came to the United States from Ukraine in need of special surgery. The Archbishop expressed his gratitude for Mr. Horodynskyi’s bravery. As is tradition in Ukraine when honoring a veteran, all the guests rose and gave Mr. Horodynskyi a thunderous round of applause to thank him for his service.

The same resilience and passion was felt throughout the program.

The master of ceremonies, operatic soprano Vira Slywotzky, sang a moving excerpt from a Ukrainian operetta, and accompanying pianist Pavlo Gintov played an excerpt from a recently discovered early 20th-century Ukrainian composer banished from the USSR.

Among the beautiful pieces performed by Mr. Gintov and Ms. Slywotzky was a beautiful elegy by the little-known Ukrainian composer Serhiy Bortkiewicz.

Mr. Gintov explained to the audience that Bortkiewicz is just one of many Ukrainian musicians who have been repressed or forced into exile as part of Russia’s centuries-long campaign of cultural genocide against Ukraine. Ukrainians are now making efforts to revive these works and introduce them to international scholars and the public, Mr Gintov said.

The Nov. 6 lunch marked the conclusion of a series of sell-out fundraisers taking place across the United States in 2022 organized by the Ukraine Catholic University Foundation and regional volunteer committees.

In addition to lunch in New York, the Perelaz Folk Ball was held in Chicago. This event raised more than $240,000. And an event in San Francisco raised more than $93,000 and featured renowned Stanford University professor and political philosopher Francis Fukuyama.