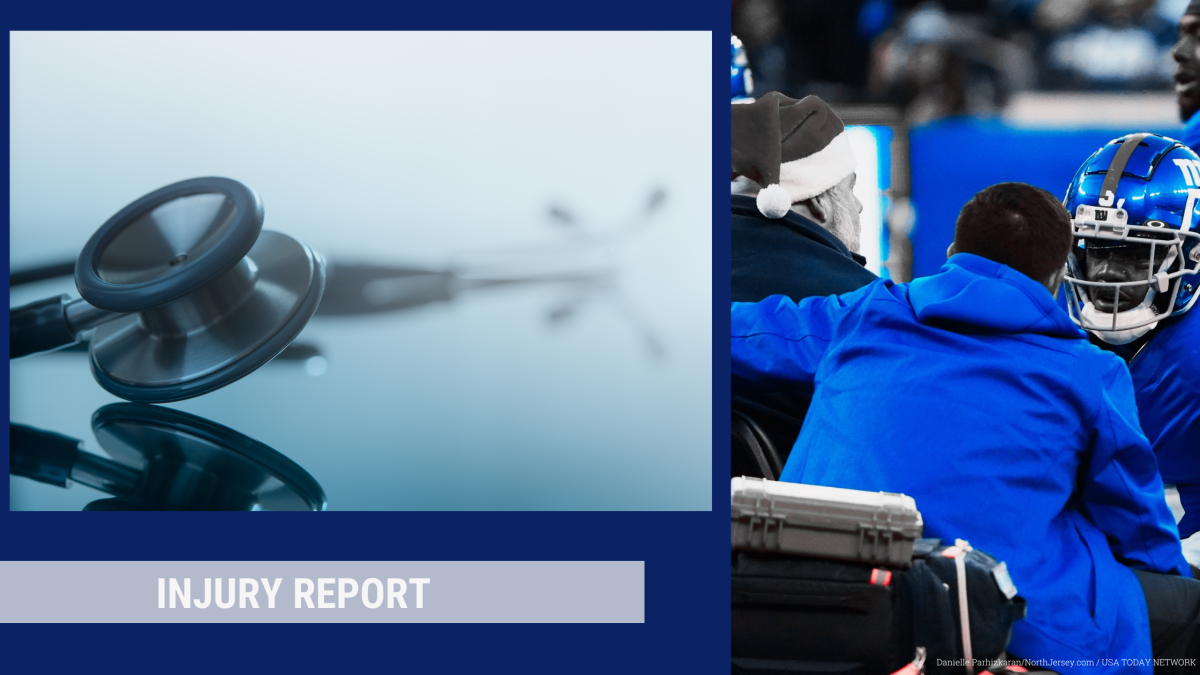 Daboll also said fullback Azeez Ojulari, who is currently on injured reserve with a calf injury, will not be activated for Thursday’s game against the Cowboys.

Speaking of injured reserve, the Giants currently have no plans to put cornerback Aoree’ Jackson (knee) on IR, despite an originally reported prediction that Jackson would be out between 4 and 6 weeks. Daboll told reporters Jackson was “feeling a lot better today.”

Here’s the Giants’ injury report for Tuesday. Note: The Giants performed a walkthrough on Tuesday, so this report is projected. Bold indicates a change from Monday’s report.

As expected/feared, the New York Giants have quite a lengthy injury report ahead of their Week 12 game in Dallas, and there’s a lot to worry about when you’re general manager Joe Schoen and head coach Bian Daboll.

Among those expected to be limited were offensive lineman Evan Neal and defenseman Jason Pinnock (Kiefer).

RECEIVER Wan’Dale Robinson (ACL) was not included in the report as he will be placed on injured reserve at the end of the season.

The Giants suffered a beating in Sunday’s 31-18 loss to the Lions and now need to sort out some questions regarding their roster for the rest of the way and how they will place the prospective $2,623,197 in Cap-seat they still have to spend.

Jackson and Moreau are the team’s cornerbacks. While Jackson is expected to be out for at least four weeks per report, Moreau’s injury, originally announced as a rib, seems a little more concerning as they can’t easily pad it up to protect it. Moreau needs to show he can twist his body as needed if he wants to play.

Nick McCloud and Rodarius Williams are the next men at cornerback if Moreau is unable to play, adding to Jackson, who is already sidelined. The Giants could also bring Zyon Gilbert off the practice team if they need additional depth.

The receiver only became more of a concern between Robinson, who was done for the year, and now with the news that James has an injury, the Giants will almost certainly add another receiver to the 53-man roster rather than an easy one Increase in the practice team.

The Giants are reportedly set to meet with veteran Odell Beckham Jr. in the coming days. However, given their cap situation and injury woes, it would be surprising if the Giants signed their 2014 first-round pick for a second tour of duty.

An even bigger problem for the Giants lies on the offensive line, which seemed brimming with talent prior to the Lions game but has taken quite a hit.

Presumably Neal, the rookie, should at least be active on an emergency basis on Sunday. Matt Peart, who ended the game with the right tackle for Phillips, would likely get the start if Phillips couldn’t play.

In the middle, Nick Gates will stand in for Feliciano when he’s not able to play. Meanwhile, the coaches must decide who will start at left-back from Josh Ezeudu and Shane Lemieux.

Here’s the Giants’ full Monday injury report based on the forecast: