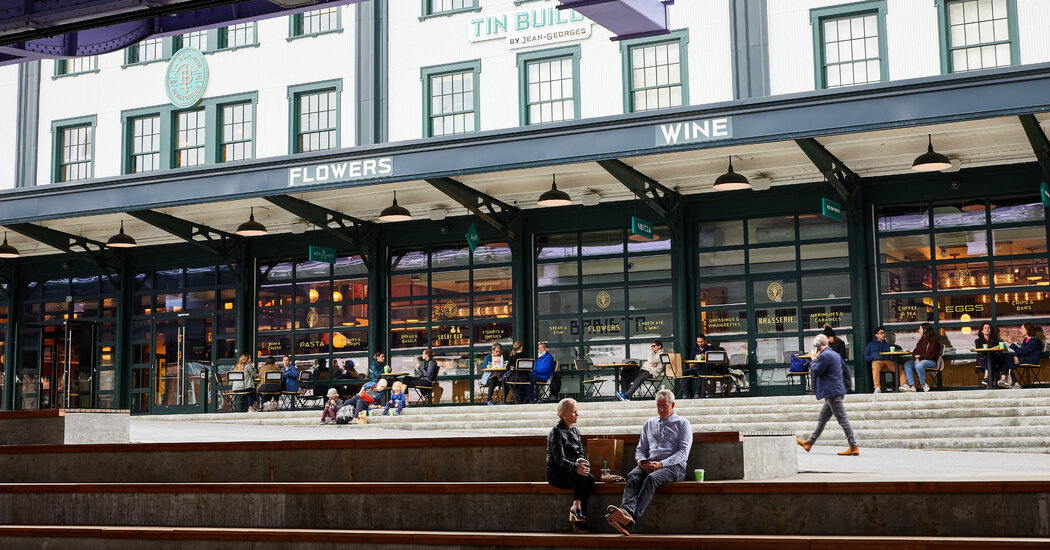 It was at least half a dozen trips to the Tin Building, South Street Seaport’s new market and food hall run by chef and restaurateur Jean-Georges Vongerichten, before I realized what was missing.

I had eaten at least 80 different things, with stops at each of the restaurants (five if you only count seats with real chairs), counters (three) and bars (another three), as well as various stalls and kiosks and so on. I had been staring at all the fish on ice at the seafood retail market and they were staring at me. I had been browsing the bottles and boxes and jars on the grocery shelves and some of my favorite candy bars from the small and almost overwhelming candy store The Spoiled parrot. I had admired the expensively groomed dogs that casually strolled through the area. I had so much to see and taste and spend money at the Tin Building (formally and pretentiously dubbed The Tin Building by Jean-Georges) that it took me longest to realize that the place has no smell.

To be clear, many of the things I ate there smelled great when I got close to them. As I pushed my spoon through the soft lid of melted cheese onto a bowl of onion soup T Brasserie, the air was filled with the marrow-warming aroma of late Paris nights. above, at the dough of the FrenchI was eating a thin-crust ricotta fontina pizza that smelled like preserved lemons and fresh lemons.

But the tin house itself? It doesn’t smell like anything.

It used to smell like nothing else in the world. From 1907, when it was built to service the country’s largest wholesale seafood market, until a fire wiped it out in 1995, the building and the rest of the Fulton Fish Market reeked of exhaust fumes, cigarettes, cigars, burning scrap wood, ebb tide and fresh pine pallets and fish of all kinds, not just today’s catch but what a perfumer would call the aroma’s base note – scraps of catch from other days, splashed out of sight but not washed away.

When the market moved to the Bronx in 2005, the Tin Building couldn’t keep up. As a designated landmark, it was also not allowed to be demolished. Eventually, the Howard Hughes Corporation, which leases the property from the city along with the rest of the seaport, commissioned SHoP Architects to design a new sheet metal building on an elevated site a few yards from the original site, incorporating portions of the old structure that survived is.

Inside this facsimile is a food hall with retail outlets and restaurants. European market halls are the obvious inspiration, but real public markets in Europe have more choice – you almost never see one with just one butcher, like the Tin Building. They are also more chaotic – there are birds in the rafters and a hint of impatience in the salespeople’s voices. A good market hall should also smell a little, with hints of fermenting apples and blue cheese and the bleach used to scrub the floors at the end of the day.

You don’t get any of that in the Tin Building, for better or for worse. The restaurants have a synthetic studio solder look, like the frozen yogurt shops in The Good Place. Roman and Williams’ interior design is a brilliant fantasy of a city built for consumers, where all roots have been cut off and manual labor swept away, no doubt to the Bronx.

However, the Tin Building does not underestimate its buyers. It is also not suitable for tourists. The retail markets upstairs sell about 5,000 items, quality staples alongside esoterics you’ll find in few other places: fresh anchovies or a whole head of tuna at the seafood counter; fresh ginger on a stick in the produce section; Veal sweetbreads and suckling pig at the butcher’s; Traffic jams from Alain Milliat on the left bank of the Rhône commercial; South Korean mugwort vinegar Mercantile East.

I will never go to the Tin Building to buy groceries for me and the kids for a week. But I’ll be back next time I want to make a meal people will remember or need a gift for someone who isn’t easily impressed.

The sales areas, which are grouped in the middle of the building, are almost absurdly well stocked with delicacies of one kind or another. The restaurants and food stalls are everywhere, literally and figuratively. Scattered around the outer walls, they vary in quality, although none are worth visiting on their own.

Not even T Brasserie, the French restaurant. Mr. Vongerichten has never given us an entire menu of French classics, and now we know why. The salads were spirited — Mr. Vongerichten is the man of a thousand vinaigrettes — and the onion soup is stunning. But pâté en croûte was crumbly and underseasoned, steamed kidney beans were crispy and too short, the fries were limp, and serving the cheeseburger on a puff pastry seems like an odd gimmick.

Not that food from other cultures fares much better than Mr. Vongerichten’s.

House of the Red Pearl is a foray into Orientalism so invested in clichés of the mysterious East that its dining room is hidden behind a curtain at the back of the Asian grocery store. The space is glamorous in Shanghai. The food looked good. The dumplings and pot stickers and spring rolls were on the right track. But the roast duck was tough, its skin not even remotely crispy. Was the fried rice really fried? It was a soupy mess.

At the bottom of the escalators, you can get dosas from a take-away kiosk that also makes crepes. (His name: Crepes & Dosas.) There are no Indian dosa fillings like potato masala; Most toppings are standard French fare like ham and cheese. When it comes to making gluten-free crepes out of lentils and rice flour, maybe the Frenchman’s name should have been Dosa.

You’d be happy to find a food counter like this Taquito at an airport during a long layover, but out in the wilderness, his little tacos on blue masa tortillas are okay — my “crispy gulf flounder” wasn’t crispy at all, and the avocado crema turned like whipped cream on a banana split.

Is Jean-Georges Vongerichten anyone’s idea of ​​a good man for tacos? Apparently he’s for the Howard Hughes Corporation. In 2013, the city council allowed the company to go ahead with plans for a market in the Tin Building, provided it would “offer locally and regionally sourced foods sold by multiple vendors.” No one who knows what a real estate developer’s promises are worth will be surprised that we got a single salesman selling Italian honey and Japanese tea.

A true public market with Northeast roots and space for small businesses would have provided some of the authenticity the Tin Building lacks. (Who knows, maybe it had a Chinese restaurant with a Chinese owner and Chinese chefs.) But if we must have a single vendor market, it’s hard to think of a vendor better suited to the task than Mr. Vongerichten. It turns out he can’t do everything. But he can do a lot more things than anyone around, and he does it with a light, playful spirit that is closely tied to a fearsome talent for organization.

I’ve been to Frenchman’s Dough twice and haven’t tried anything I didn’t like. The pizzas may not be very Italian, but they are very good, prepared with a light hand and a strong instinct for flavors that want to be together, like Brussels sprouts and bacon or the unlikely pairing of mussels and broccoli. And the flavorful, almost crumbly cheesecake, baked in the wood-fired oven on the third floor, is one of the best things about the whole building.

seeds & weeds is essentially a scaled-down, less scenic version of abcV, the Manhattan restaurant where Mr. Vongerichten taught the kids a thing or two about vegetables in an impressive late-career creativity spurt. I wish it didn’t look so much like a Greenpoint houseplant shop’s Pinterest page. But the kitchen is full of clever ideas, like Japanese celery root katsu or grilled endive canoes stuffed with rambutan, radishes and a tart peanut relish.

the sushi counter, Shikkuwon’t compete with such out-of-the-way omakase parlors as Yoshino, but it makes a very strong argument that inexpensive, everyday sushi — almost a vanishing type in the city — can be worthwhile when prepared with care.

Like Shikku, the Fulton Fish Co. benefits from the top-notch seafood the Tin Building gets, though long gone are the days when fishing boats docked out the back door. You can sit at the marble counter and study the New England shellfish laid out on a crushed ice catwalk before moving: Freshly shelled scallops with homemade yuzukosho under a pickle fan? Crispy squid curls on a citrus and green olive salad?

Whatever you get, it’s worth supplementing with thick-grain fermented Danish rye and butter. Bread, baked in the provision kitchen upstairs, is one of the highlights of the Tin Building wherever you see it. In the in-store bakery, you can throw yourself into tomorrow’s buns with a loaf of sesame semolina. The homemade English muffins are probably the best thing on the egg sandwich counter, Double yolkand the densely crusted walnut and dried fruit bread served with a cheeseboard is one of the things that makes the low-key wine bar so worthwhile.

I was having a cold glass of Muscadet in this bar when Mr. Vongerichten stopped to chat. (By then, I had spent so much time in the Tin Building that I was essentially a regular, greeted with a nod by hosts and bartenders.) I asked him how he coped with the labor shortage when he tried to fill a full one Assemble staff of 700 people. At the end of the month, the market, which has only been running on a reduced schedule since it opened in August, will finally switch to seven days a week.

We chatted for a few minutes before he left to check on a detail somewhere. When he was gone, the air smelled of mints.