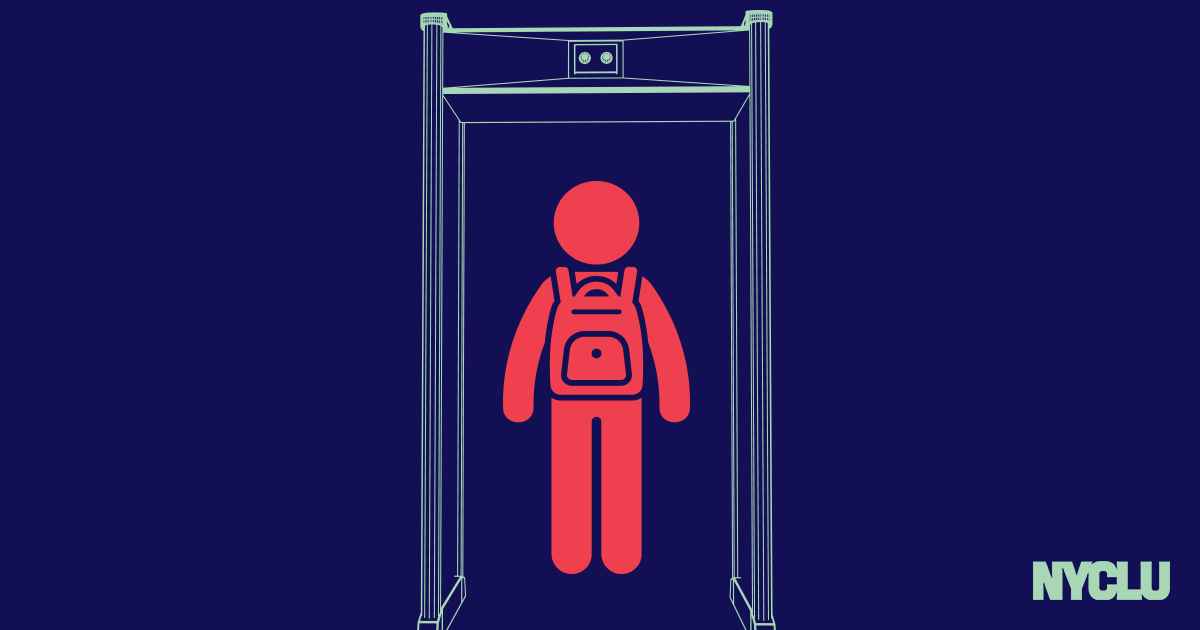 We know that tens of thousands of students walk through metal detectors in New York City every day. We know that the vast majority of them are colored students. And we know that for many of these students, metal detectors will result in confrontational, invasive, and harmful interactions with school police. Waiting in line to be scanned and possibly searched or frisked often results in students being late for class, costing cumulative hours or even days of study time throughout the year.

For years, NYCLU has been trying to get answers. Since 2016, the NYPD has been required to collect information about the use of metal detectors in schools and to report that information to the City Council and the public. In 2019, NYCLU filed a Freedom of Information Act motion with the Council requesting these reports. But later that year the council replied that they did not have the data we requested.

In 2020, the NYCLU filed a lawsuit against the NYPD to compel disclosure of information about the department’s presence in schools and the effects of metal detectors on students. But this year a conservative court ruled that this information could be hidden from the public.

With no official reports, we have to rely on an analysis of public data that very likely underestimates the number of students scanned each day.

Using the Student Safety Act quarterly reports from 2016-2022, which collect information on NYPD activity in city schools, we have compiled the following:

Our analysis shows that nearly 200,000 students have visited schools with scans since 2016 – putting them at risk of harassment, invasive searches and tense interactions with police. This certainly captures only a fraction of the impact of metal detectors in city schools.

According to our analysis, students of color in schools that had scanning made up 88 percent of total enrollments:

Our analysis showed that schools with scans had more black students and fewer white students than schools in our analysis that had no evidence of scanning.

There is also evidence that the reasons given for the NYPD using metal detectors in some schools and not in others are mysterious, completely nonsensical, or racially biased. For example, the Bayard Rustin Educational Campus (BREC) in Manhattan’s Chelsea neighborhood serves primarily black students and is home to several schools for overaged and undercredited students. BREC students have repeatedly been subjected to unannounced metal detector screening.

In 2018, school principals and students on campus were notified by police that the metal detectors were necessary due to reports of crime in the neighborhood. But the NYC Lab School for Collaborative Studies across the street — which has a mostly white student body — hasn’t been repeatedly scanned with metal detectors.

By hiding the full extent of the use of metal detectors, the NYPD and the union that represents school police can pick details to feed the public and the tabloids. This information is usually designed to fit a narrative that the city schools are dangerous and full of guns and that only metal detectors and police officers can protect the students. These reports often include the number of “guns” seized by school police, but for years students have told us that these numbers include everyday metal objects like deodorant cans, key rings, and forks. The NYPD refuses to tell us exactly what is being confiscated and allows them to confiscate students’ belongings without supervision.

Given the real impact of metal detectors being kept under wraps and the public exposed only to the narratives the NYPD wants to push, the city feels little pressure to curb metal detector use. Officials have even experimented with other, even less proven technologies.

In March, Mayor Eric Adams promoted a new scanning technology from Evolv Technologies that “passively” scans students as they enter their school. However, this technology has regularly misidentified Chromebook computers as weapons, putting students at risk of entirely unnecessary confrontations with the police that could easily escalate.

Everyone wants safe schools, and it’s understandable to reach for something like metal detectors as an easy way to achieve that goal. But metal detectors can’t make schools safe. To get to the heart of this problem, students need to trust their school’s teachers and staff to make them feel comfortable telling them when something is wrong. Schools also need more counselors, social workers and medical staff who can help students deal with problems before they become serious. The city should invest more in clean, healthy school buildings, after-school support, and culturally relevant curricula.

We should limit the use of metal detectors and invest in these proven solutions. This is the only way truly safe schools can emerge in New York City and throughout the state.

If your school has been scanned in the last six years and has not been identified in our analyses, please email [email protected]