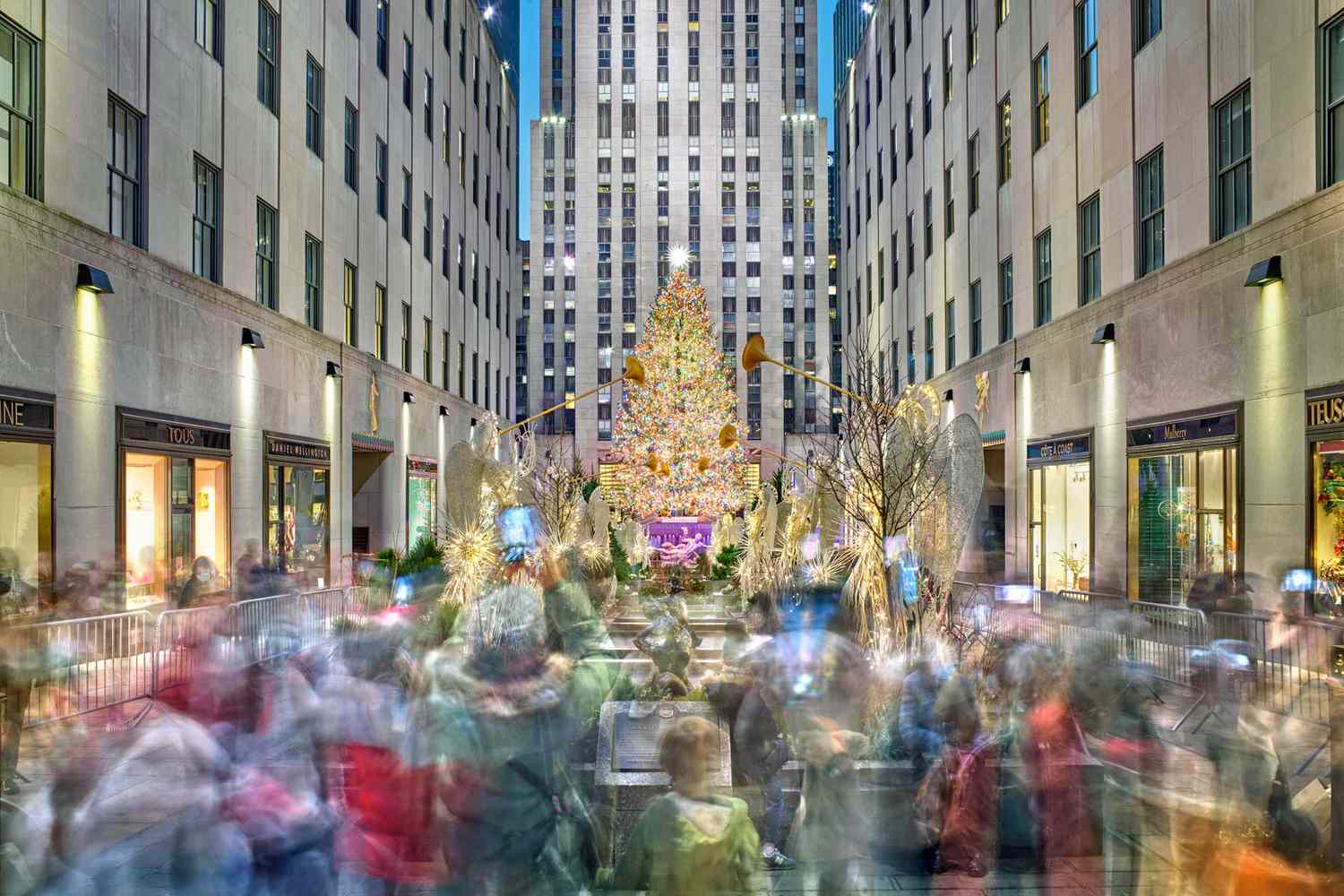 What exactly makes New York City so adorable around the holidays? We asked some of our favorite local writers to address this question.

Leslie Jamison finds the spirit of the season in a quiet suburban neighborhood with a big personality. Sloane Crosley feels the magic of the chill blowing in from the river while Rumaan Alam takes the kids downtown to see the city in miniature. And Jacqueline Woodson notes that a favorite childhood destination is still a bright spot — and a safe haven — after all these years.

Read on for her reflections, from the Bronx to Brooklyn.

For a long time, living in New York City was associated with a constant sense of not belonging. It went deeper than just not being from here – not that many New Yorkers are – that I finally started to have that feeling Not Affiliation was indeed a form of affiliation. A belief in a superior New York that existed out of my reach, a sense that a better party was happening somewhere else? This feeling was the party.

At times, however, that feeling was pierced by a visceral, electric sense of presence. One of the first times I really felt like I belonged to New York was in my twenties, standing in awe in front of the Christmas lights of Dyker Heights, a Brooklyn neighborhood near the Verrazzano-Narrows Bridge that has a really extravagant, almost absurd show offers every year. Honestly, lights are just the beginning. Everything shines: An army of angels. Glowing cribs. Towering Nutcracker. Grinning snowmen. shattering stars. Elves in tights. A red pickup truck. A huge milk bottle. There are millions of lights. Some of the displays are said to cost more than $20,000. Who knows what Con Edison makes of the celebrations each year?

Feel small in a landscape of light – not extinguished, but surrendered. Let your face reflect the glow of fellowship among strangers—that’s what this city does best on its better days.

The tradition began in the 1980s with a woman named Lucy Spata who moved to Dyker Heights and was disappointed in the lack of light and began to raise herself. I’m a sucker for any tradition born in the 1980’s because I was born in the 1980’s too, and I grew up in Los Angeles, a city where people like to call everything that predates this millennium historic. These lights also remind me of Heimat in a deeper sense – in its decadence, its excess, its splendor, in its refusal to apologize for its pageantry or its extremity. They don’t play it cool. They want you to like them. They want you to be awesome. Count me in. I’m glad to be awesome. I love the way miracles make it harder – even for an evening, for an hour – to feel trapped outside of anything.

Awe can make you feel attracted and rejected at the same time, and so much of the awe of New York seems designed to make you feel: do you want me but you can’t have me? Dream of me but you can’t afford me. But this miracle is something else. Just a D-Bahn ride away. So get a MetroCard. Get a paper cup of cocoa. Feel small in a landscape of light – not extinguished, but surrendered. Let your face reflect the glow of fellowship among strangers—that’s what this city does best on its better days. — Leslie Jamison

All islands feel cooler as you approach their edges. The streets of Manhattan are famously unsubtle, especially in the dark days of December. If you head for the river on either side, the wind picks up, your nose turns red, your hands burn. I can’t think of anything better.

This has always been one of my favorite winter activities – getting dressed and meandering along the grey, desolate trails of Hudson River Park. Then, in the midst of the pandemic, came a great gift for people like me: the opening of Pier 26. The pier, which juts out off the coast of TriBeCa, aims to educate visitors about the river’s ecology through heavily characterized Native American flora, a tide deck, and a habitat walk. In the summer, it looks like a luxury resort that just happened to go public, with boardwalks, loungers, and shrubbery. But I think it’s the winter version of the pier that I like the most. In the midst of a season that can feel crowded and overstimulated, a stroll along the river feels like a choice. It’s the intentional approach to a New York winter, not the cross-to-bear.

Related: 7 European-style Christmas markets to experience in the US

Pier 26 also features oversized swing benches that are too new to creak. Sitting on it feels like a good reward for a chilly walk. And because they’re reminiscent of porch swings, it’s easy to imagine that I’m looking out onto my own front yard – and that front yard happens to be the Hudson River and the New Jersey skyline, and my neighbors the few relatives and possibly masochistic souls who share the same lustrous had an idea.

Of course, nobody can stay in the wind and the wasteland forever, with a dripping nose and numb feet. Head inland for cozy downtown establishments like the Waverly Inn, the Nines, and the Bowery Hotel, places with big fireplaces and warm liquor. Places that offer less virtue but encourage better circulation. – Sloane Crosley

Children are fickle about their passions. A specific doll replaces a stuffed animal. One day it’s Greek myths, the next knights and dragons. Although I don’t remember my children’s first words, I hope I will never forget my older son, aged 15 months, who said insistently “Doo-doo, doo-doo” until I understood he was chu-choo meant. He was less fickle than most – we spent the next five years talking about transportation.

When my family first ventured out to the annual Holiday Train Show at the New York Botanical Garden, we had a chubby toddler tied to a stroller. When we were last there we had two children. Everyone had brought their best friends who were now old enough to get bored with their parents.

In winter, when the last petals have fallen and the trees are beautifully bare, you can step out into the cool garden and be warmed by more than a million LEDs Oh and ahh of young people,

I’m not sure why trains are so strongly associated with Christmas decorations – probably nostalgia for a past that never was. But with this show, the holidays aren’t quite the point. Sprawling over 250 acres in a quiet corner of the Bronx, the New York Botanical Garden is a National Historic Landmark and the largest such institution in a US city, so the focus is rightly on nature. Model trains weave between miniature versions of New York City landmarks (Gracie Mansion, Statue of Liberty, Metropolitan Museum of Art) built from bark, pine cones, seeds and other natural materials.

Day-trippers braver than us might enjoy trudging the grounds in December. We never quite get there. For me, part of the joy is entering the greenhouse where the model trains are installed. The children wriggle out of their winter coats with relief. The air smells alive. I show buildings we know and marvel at how skillfully the model makers have turned acorns into architectural ornaments. I enjoy the children. When we last visited, my teenager was making videos on his phone of the toy trains going slowly but somehow very fast, just like time itself. — Rumaan Alam

The light landscape of the Brooklyn Botanic Garden

As a Brooklyn kid in the 1970s, one of our family’s springtime rituals was a trip to the Brooklyn Botanic Garden. My sister and I changed into our pastel colored dresses, put on lace ankle socks and slipped on our white patent leather shoes. I remember goatskin gloves and braided pigtails under white brimmed hats. I remember stuffing department store perfume samples into matching handbags while our brothers struggled with the knots on their ties.

Although the gardens now known as Prospect Heights were only about four miles from our home in the Bushwick neighborhood of Brooklyn, there was no direct route for our carless family. So we set out on the hour-long journey, boarding a train and changing onto another.

More excursion ideas: 10 festive hotels that will make the holiday season more magical than ever

Walking through the gates was like stepping into Oz. That’s what I always promised myself as a kid – a world of flowers and trees and grasses. A world of sprawling lawns and snapping turtles and greenhouses and koi. A world where Brooklyn children cried out in delight from tiny apartments as they roamed free in what many of us then called “the country.” I promised that one day my own children would know that joy.

Perhaps each of my two children visited the gardens with me twice when they were babies. When they were born, too many other things were happening. And even though we live nearby — just a short walk through Prospect Park, across Flatbush Avenue, past the beauty that is Brooklyn’s Central Library — we’ve been outdoors for a long time, in our own backyard or in the country or outside of the country.

But last year the Brooklyn Botanic Garden invited me to write the poetry for their first-ever Winter Lights Landscape — when the garden becomes a world of lights, music, local artist works, hot chocolate with or without spikes, and brightness that is always needed in the World. As I pondered where my words would go, I realized how much this place had been a respite for my mom, keeping us entertained and busy on a single parent’s budget.

In spring, the daffodils and lilies are still blooming freely. The wildflowers hold their breath. And in winter, when the last petals have fallen and the trees are beautifully bare, you can step out into the cool garden and be warmed by more than a million LEDs Oh and ahh of young people and now the absolute joy that comes from surviving a pandemic and literally stepping out into the light. – Jacqueline Woodson

A version of this story first appeared in the November 2022 issue of Travel + Leisure under the heading “The best time of the year”..”