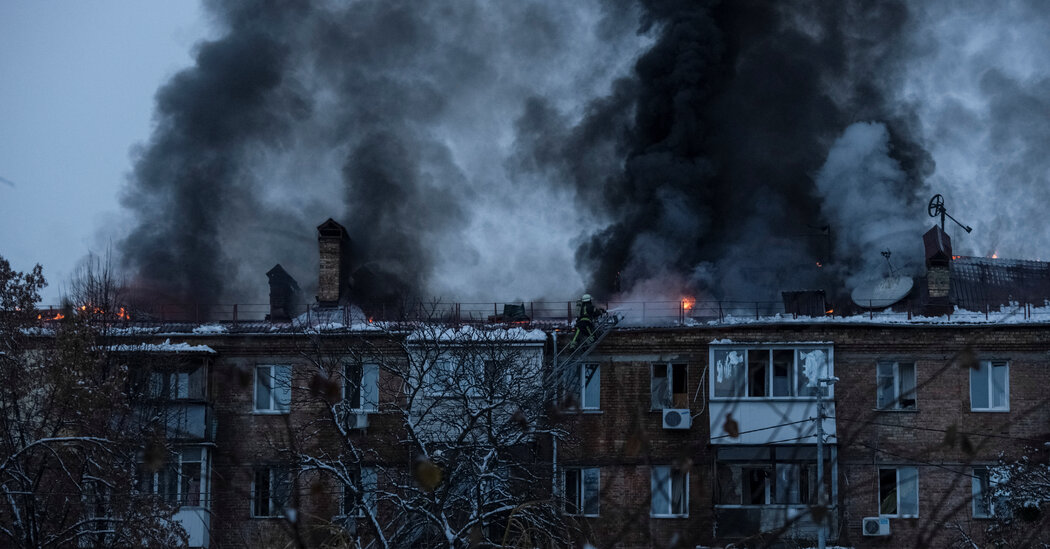 Welcome to the Russia-Ukraine War Briefing, your guide to the latest conflict news and analysis.

One of the heaviest barrages of Russian airstrikes in weeks left Kyiv and other cities in Ukraine without electricity, water and other basic services today. Russia’s intensified attacks on infrastructure come as temperatures drop, raising fears of a humanitarian catastrophe in the coming winter months.

President Volodymyr Zelenskyy said yesterday it was clear that Russia aims to “turn the cold of winter into a weapon of mass destruction” as the war enters its 10th month. Tens of millions of Ukrainians are currently without electricity and half of the country’s energy infrastructure is either damaged or destroyed, according to the World Health Organization.

Russia’s power grid strikes have forced the state-owned utility to conduct power outages, leaving almost everyone in the country without power for four to 12 hours a day.

The Ukrainian government is helping residents evacuate areas where it says it cannot guarantee enough electricity and heat, including the city of Kherson, which is now back under Ukrainian control.

“Put simply, this winter is about survival,” said Hans Kluge, WHO regional director for Europe. He expects up to three million Ukrainians will leave their homes this winter to find warmth and safety.

“They will face unique health challenges, including respiratory infections such as Covid-19, pneumonia and influenza, and the serious risk of diphtheria and measles in unvaccinated populations,” he added.

Winter weather has already set in, with temperatures below freezing and snow in much of the country. Ukraine and its allies are already preparing for the worst.

Zelensky has announced a nationwide action to prepare thousands of makeshift centers to provide basic services — electricity, cellphone, Internet access, heat, water and first-aid supplies. during longer power outages. Municipal workers in Kyiv are also constructing 1,000 heating shelters that can serve as bunkers for hundreds of people and are filled with more than a week’s worth of essential supplies

In its latest $400 million aid package, the US included more than 200 generators along with munitions for the NASAMS air defense systems and the HIMARS artillery systems that it has already shipped to Ukraine. Some European cities have also joined forces to launch an initiative to ship generators to Ukraine.

Even before Russia’s broader attacks on infrastructure, Ukraine was facing a humanitarian crisis. According to the UN, almost 18 million people – more than 40 percent of the total population – are dependent on aid. Around 14 million have already had to flee their homes, including 6.2 million internally displaced persons and almost 7.7 million refugees.

JOIN US ON TELEGRAM

Follow our coverage of the war on the @nytimes channel.

What else are we tracking?

In order to report comprehensively on the war, we often link to external sources. Some of these require a subscription.

Thank you for reading. We’re leaving for Thanksgiving on Friday but returning on Monday. – Carole

Email your thoughts to [email protected] Did a friend forward the briefing to you? Sign up here.