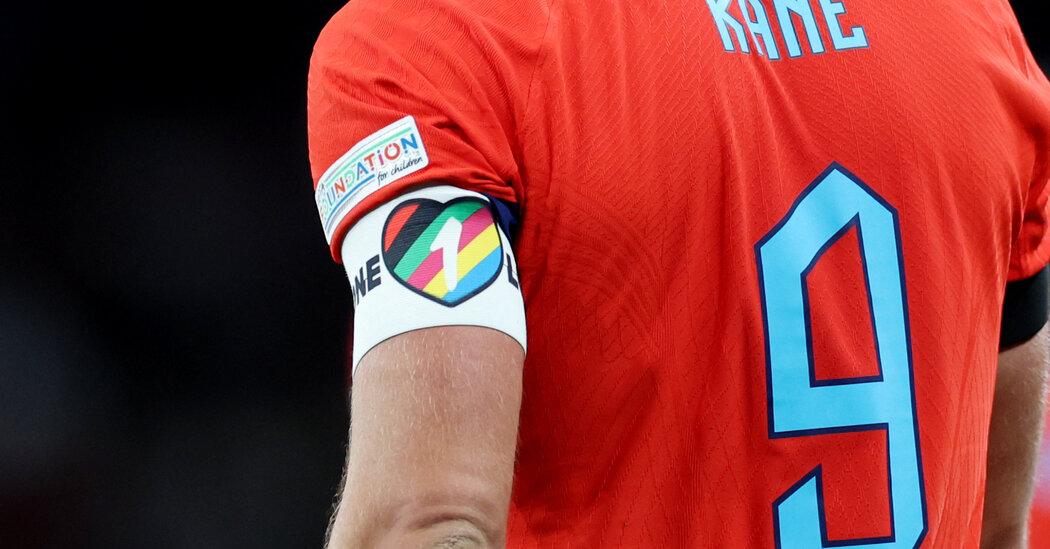 World Cup organizers on Monday threatened to issue a yellow card to any player wearing a rainbow armband at the World Cup, escalating a fight that had started as a show of support for gay rights but has instead escalated into turned into a showdown between world football’s governing body and a handful of European nations.

Harry Kane, the England captain, was to be the first player to take to the field at World Cup matches wearing a multicolored ‘One Love’ armband. England play Iran in their first game of the World Cup on Monday.

The armbands were designed to show support for minority groups amid ongoing concerns over Qatar’s treatment of the LGBTQ community, where homosexuality is a crime. A group of European football associations banded together and planned to defy the strict uniform rules of FIFA, the world governing body of football, and wear them at the World Cup, their sport’s biggest stage.

On Monday morning, however, teams said FIFA’s disciplinary threats now made that impossible.

In tense discussions over the weekend, the teams had shown their willingness to accept a fine for the uniform violation. But on Monday they faced a new dilemma, according to a released statement from seven European teams, including England. FIFA has now threatened to issue a yellow card to any player who enters the field with the unauthorized armband.

Starting a game with a yellow card puts a player at risk. If that player were to receive a second yellow card during the game, it would result in disqualification. Players can start with one yellow, but two will result in a red card – and immediate dismissal and suspension for the next game.

As a result, teams said they had no choice but to ask their players not to risk punishment.

“FIFA has made it very clear that if our captains wear the armbands on the field, they will impose sporting sanctions,” the group of seven said in a joint statement. “As national federations we cannot put our players in a situation where they face sporting sanctions including warnings, so we have asked the captains not to try to wear the armbands at FIFA World Cup matches.

“We were willing to pay fines that would normally be imposed for gear violations and had a strong commitment to wearing the armband. However, we cannot put our players in a situation where they are cautioned or even forced to leave the field.”

The statement was issued jointly by the football associations of England, Wales, Belgium, Denmark, Germany, the Netherlands and Switzerland.

“We are very frustrated with FIFA’s decision, which we believe is unprecedented,” the associations said.

The first armbands were due to appear in several matches at Monday’s World Cup: The Netherlands and Wales, also playing their first matches, were among England’s group of nations ready to defy FIFA. That now seems unlikely.